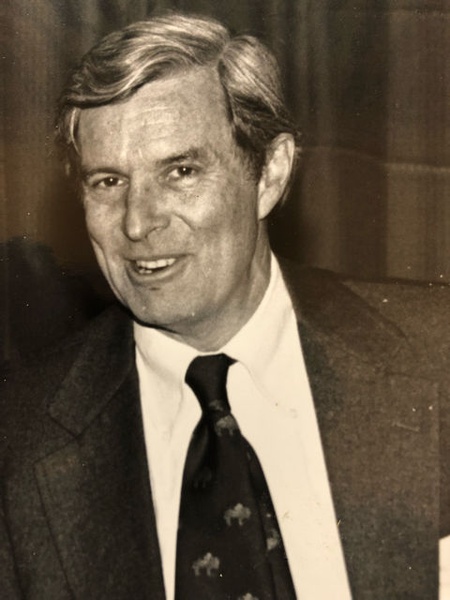 Andrew Jackson Mahoney passed away on Saturday, May 12, 2018 surrounded by his family. Andy had resided at Fox Hill Village in Westwood MA for the last 2 years after moving from Rye Beach NH where he lived for over 20 years.

Andy was born on July 13, 1927 in Brookline MA. He was the son of Frank and Dorothy and is survived by his sister Brenda "Taffy" Beckman. Andy was pre-deceased by his wife, Patricia Tosi, with whom he shared 57 wonderful years prior to her passing in October 2016. Andy was the loving father of Andrew Jr (and Mary Beth) of Wellesley MA, Kathleen Roe (and Kip) of Jackson WY, Peter (and Mary) and Stephen (and Krisha) both of Sherborn MA. He adored his 9 grandchildren: Meghan, Caitlin, Kevin, Alexandra, Jack, Laurel, Courtney, Kathryn and Caroline. His grandkids could always count on him to be there at sporting events, concerts and theatrical productions. More than anything, "Papa" relished the one-on-one conversations with his grandchildren when he would learn more about them and share some of his wisdom.

Andy graduated from Phillips Exeter Academy in Exeter, NH and was drafted into the Navy where he served until August 1946. He graduated from Harvard College in 1950 and then , embarked on a long investment career that included several distinguished firms: Halsey Stuart, Breck McNeish & Nagle, The Boston Five Cents Savings Bank and Union Warren Savings Bank. He was a former director of the Bond Analysts Society of Boston and a member of the Boston Economic Club. After 2 decades of running investment portfolios as a senior bank executive, Andy rounded out his career with an entrepreneurial venture by purchasing and running Norman's Office Supply in Gloucester, MA.

Young Andy savored the life of a bachelor enjoying many years with his friends at 333 Beacon St. Weekends skiing at Wildcat and building a house in Jackson NH fostered friendships with Roger, Bert, Chuck, Jim, John and others that Andy enjoyed his entire life.

Andy and Pat raised their family in Winchester, MA where Andy was a soccer coach, a member of the parish council at St Eulalia's Church, and an ardent supporter of his kids' activities. After moving to Rye Beach, NH to enjoy retirement with his wife, Andy served on the Town of Rye Budget Committee and was a Trustee of the town's retirement funds while also finding time to read books, play bridge, and enjoy his grandchildren.

Family and friends will gather to honor and remember Andy for his funeral mass on Thursday, May 17, 2018 at 10:30 am in St. Theresa's Church, 35 S. Main St., Sherborn, MA. Interment with United States Navy Honors in Holyhood Cemetery, Chestnut Hill, MA will be private.