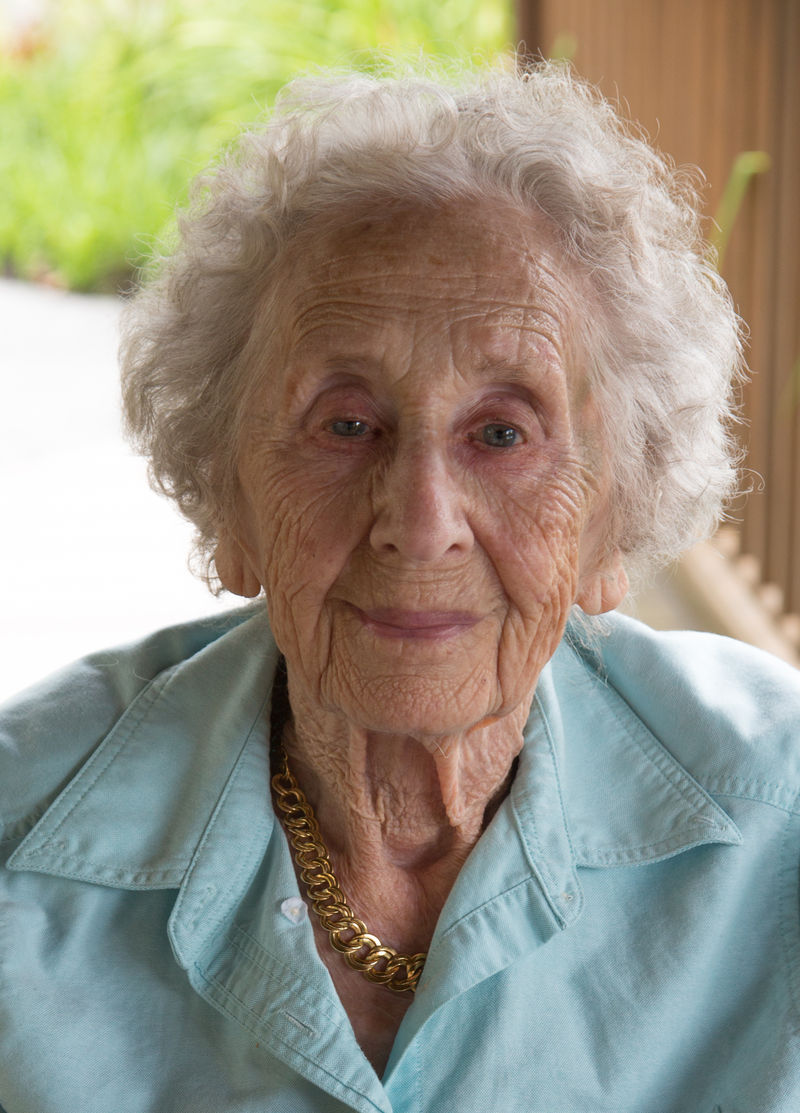 Passed away on December 8, 2014.
Born in Watertown on November 13, 1914, Anita Marie Wilson grew up in Winchester, Massachusetts, the daughter of Albert and Anita (Bagge) Wilson. She graduated from Winchester High School in 1932 and Wellesley College in 1936. In 1939 she married Wilbur Henry Norseen. They eventually settled in Chappaqua, New York, where they raised three daughters until "Norse" died in 1953. Moving back to Massachusetts with her family in 1954, Anita settled at "Misty Meadows" in Bolton, where she spent the next 50 years planning and developing gardens on the property. In 1964 she married Russell Houghton Hooker, with whom she spent time traveling the world when not enjoying the farm. When "Hought" died in 1984, she continued at Misty Meadows, gardening and spending time with family.

Her love of horticulture and skill with plants and flowers led to a long involvement with the Worcester Garden Club, where she was president for a term and never tired of sharing her experience with other members. One of her proudest achievements in the field was the development of the Tower Hill Botanic Garden in Boylston, while she was a trustee and then vice president of the Worcester County Horticultural Society. Some of her gardens are preserved photographically at the Smithsonian Institution. She was a frequent entrant and won numerous awards at the Boston Flower Show and other competitions. Moving to Concord in her advancing years, Anita always had flowering plants in her sunny windows, and tomatoes and herbs on her balcony in season.
She enjoyed celebrating her 100th birthday with family and friends at Newbury Court.

She is survived by her daughters, Nan Norseen of Bolton, Hannah McClennen of Hubbardsville, NY, and Elizabeth Boritt (Gabor) of Gettyburg, PA. Also surviving are grandchildren Alexandra Dohan (David) of Lexington, Aaron McClennen (Eve) of Decatur, GA, Beowulf Boritt (Mimi) of New York, Jakob Boritt (Heather) of New York, and Daniel Boritt (Katie) of Indianapolis, IN, as well as great-grandchildren Sarah, Benjamin, Veronica, Gillian, Henry, Leo, and Lincoln. Also surviving are her brother Albert Wilson of Bedford, and several nieces and nephews, and stepchildren Creighton Hooker (Anne) of Bonita Springs, FL, Margaret Moser of Reston, VA, and Gregory Hooker (Sarah) of Marshfield, VT. In addition to her husbands, she was pre-deceased by her brother Donald Wilson.