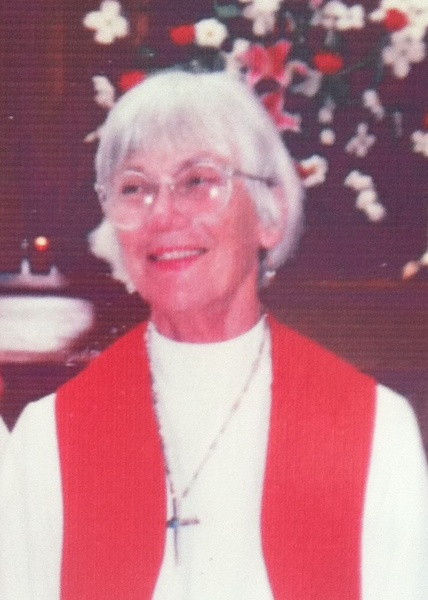 The Reverend Anna H. (Clancey) Caskey of Lexington, formerly of Lincoln, died on January 29, 2011 of complications from Parkinson’s disease. Her death occurred two weeks to the day after her family had gathered for a joyous celebration of her 86th birthday.

Known as Nancy for many years, she was born on January 13, 1925 to William Power Clancey and Marion Hayward Clancey of Cincinnati, Ohio. As an early adolescent, she moved with her family to Cambridge, Massachusetts, a city that remained her Mecca throughout her life.

In 1943 she married Walter H. Caskey. She graduated from Radcliffe College in 1946 with a B.S. in Russian history. She and Dr. Caskey had four children. They were divorced in 1985.

Throughout her life, Reverend Caskey had two passions—the theater, and her religious vocation. She had a distinguished career in community theater, culminating in the role of Mary Tyrone in the Concord Players’ production of Eugene O’Neill’s A Long Day’s Journey Into Night in 1972. She appeared professionally in the role of Mrs. Gibbs in Thornton Wilder’s Our Town at the Charles Playhouse in 1959. In 1975 she directed a group of inmates from the Concord Reformatory in a production of One Flew Over the Cuckoo’s Nest. She also acted in and directed numerous productions for the Lincoln Players, playing roles as varied as Mrs. Antrobus from Thornton Wilder’s The Skin of Our Teeth to Cleopatra in George Bernard Shaw’s Caesar and Cleopatra.

Reverend Caskey was called to the priesthood of the Episcopal Church in the late 1970s. She attended the Episcopal Divinity School and completed her studies for the M. Div. in 1981. She was ordained as a Deacon in 1985, and ordained to the priesthood a year later. She served as assistant rector at All Saints Episcopal in Brookline, Massachusetts, the Church of the Good Shepherd in Acton, Massachusetts, and St. Anne’s-in-the-Fields in Lincoln, Massachusetts. The congregations she served were devoted to her, and she was cherished by many friends from all walks of life.

The Reverend Caskey is survived by her four children, Alexander, Noelle, Jennifer, and Nicholas Caskey; by her two grandchildren, Sasha P. and Vanessa P. Caskey; and by two great granddaughters, Talia and Isabela Caskey. She is also survived by her brothers Richard F. H. Clancey and Christopher Morss, and by a sister, Susan C. Strong. Another brother, the Reverend William P. Clancey, Jr., predeceased her.


Donations in Reverend Caskey’s name may be made to the National Parkinson’s Foundation Gift Processing Center, P.O. Box 5018, Hagerstown, Maryland, 21741-5018.