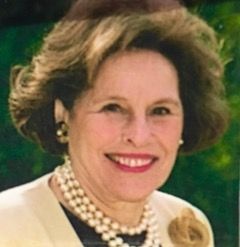 Barbara "Bobbie" Frentz Kurson, née Bloom passed away peacefully on December 5, 2017 at her home at Newbury Court in Concord, Massachusetts.

A private memorial officiated by Rabbi Jillian Cameron was held December 6 at her home. Graveside services will be held in June of 2018 at Temple B'rith Sholom - Adath Israel Cemetery in Louisville, Kentucky.

Bobbie was born in Lexington Kentucky on January 19,1925. She attended Henry Clay High School and earned her bachelor of science degree from the University of Kentucky. She and her husband J. William "Bill" Frentz raised four children in Louisville, Kentucky. Bobbie was actively involved in fundraising for the J.B. Speed Art Museum, Actors Theater, and Louisville's Children's Hospital.

Bobbie was known for her panache in interior design and for her gracious style of entertaining. The consummate entrepreneur, her many retail adventures included the Midnight Sun Boutique and Papers Unique in Louisville, as well as Barbara Kurson Antiques on Beacon Hill in Boston. She was a member of ASID and had many interior design clients throughout the East Coast.

Her marriage to Robert R. Kurson brought Bobbie to New England, where they eventually settled in York Harbor, Maine living among the beauty of her gardens and seashore vistas. Bobbie volunteered at the York Historical Society and The York Hospital in her retirement. Her greatest love was welcoming her children and grandchildren to Rock's Nose Farm.

Bobbie was preceded in death by her parents Rose Switow Bloom and Lester T. Bloom of Lexington Kentucky, her son William Frentz II of Santa Cruz, California, and her husband Robert R. Kurson of Boston, Massachusetts . She is survived by her loving and devoted daughters Alice Frentz of Kennebunk, Maine, Robin Frentz Isaacs (Kenneth C. Isaacs) of Lincoln, Massachusetts and Mary Frentz Bellino (Joseph P. Bellino) of Louisville, Kentucky. She was cherished deeply by each of her grandchildren: Catherine Isaacs, Jennifer Issacs, Daniel Frentz (Tara), Charles Frentz (Elizabeth), Lauren Frentz, Caroline Frentz and Isabel Bellino. She was adored by her nieces and nephews whom she treated as her own.

In lieu of flowers, the family asks for contributions to be made in the memory of Bobbie's favorite new charity oneinforty.org - or the charity of their choice. The goal of the "One in Forty" organization is to support Ashkenazi Jews who have a one in forty chance of inheriting a BRCA gene mutation that puts them at risk of developing cancer. The mission is to promote prevention and early detection awareness and education.