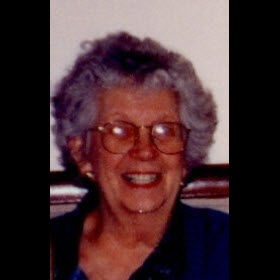 Barbara was born to Addie and Arnold Ryan and raised in Lowell, Massachusetts. She graduated from the Massachusetts College of Art in 1943. She taught art in Sag Harbor, NY and Washington, D.C. Barbara was married in 1947 in Newport, NH in the same church as her mother and grandmother. As a young bride, she and her husband Warren moved to Cambridge, MA so Warren could pursue a Masters in Engineering at Harvard University. They settled in Concord, Massachusetts in 1953 and raised their five daughters.

Barbara was an accomplished weaver, and a master of the art of Serigraphy. She worked in a group with artist Phyllis Hughes, at the the Basilik Studio, where they made silk screen Christmas cards sold to gift shops around the country. She was also an accomplished gardener, and her garden was a place of beauty in the neighborhood. She was also an active volunteer with the Red Cross. After her youngest daughter was grown, Barbara returned to work. She worked at the Concord Museum as a a guide for over 30 years. She retired at the age of 82. She loved the history of Concord and could recite many stories of historical events around town. In her retirement she enjoyed challenging New York Times crossword puzzles.

GiFTS IN HER NAME MAY BE MADE TO:
Concord Museum
200 Lexington Road
Concord, MA 01742
www.concordmuseum.org