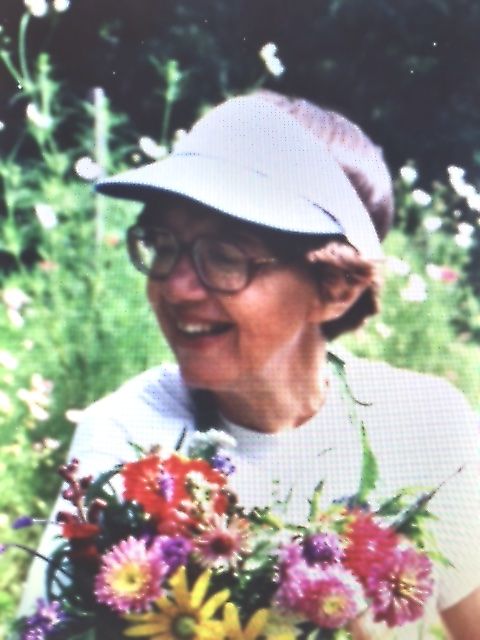 Barbara died of natural causes complicated by hospitalization on May 26, 2016, early in the morning. She was at home, with family, and free of pain. She is survived by her husband Dwight, her brother Richard of Newark, Delaware, and her nieces and nephews: Laurie, Andrea, David, Stephen, Jennifer and Carl as well as her Grandnieces and Grandnephews: Emily, Caroline, Caiden and Trevor, several cousins across the country, friends and neighbors across the USA and Canada, and the Town of Stow.

Barbara was born on April 22, 1932 at Newark, New Jersey, Daughter of Louis Putscher and Ida (Eltinge) Putscher. She attended school in Cranford, NJ, and later graduated from Newark Rutgers and Katherine Gibbs. After a secretarial job with the National Boy Scout Office (during which she got to go to a couple of Boy Scout Jamborees), she worked for the Cranford (NJ) Citizen and Chronicle newspaper.

'Bobby', as Barb was called as a child, and her cousin Janey's mothers were sisters with Dutch ancestors who had settled and become farmers in upstate New York before the American Revolution, in fact back when it was still New Amsterdam. Barb's family history was of interest to her, and not wanting to settle for the anecdotal oral tradition with its judgement and value laden selectively told stories from the growing up years, Barb worked with her mother, Ida, and later with Dwight to gather, decipher and document that family history. In the late 1980's and early 1990's Barbara's mother lived her final times in Stow with Barb and Dwight. Barb honored and cared for Ida by talking with her at great length and recording all the stories. In later years Barb and Dwight followed the clues drawn from those stories and worked, and traveled a bit during the off - season from small farming by revisiting the old homeplaces around New Paltz, NY and visiting archives there and in Washington DC. It was fun for all of us as an extended, multi-generational family to learn the new findings, which Barb and Dwight shared at the holidays each year.

Barbara's father Louis was a sometimes embarrassingly gregarious man, good humored and fun loving who was of German descent. Lou had been in the first generation of his family to be born in the United States. Lou was an ambitious and skilled electrician and constructor who worked tirelessly, when work could be found. He was fascinated with antique tools and was an avid backyard flower and vegetable gardener.

Barb's character, personality and life skills were BOTH - a fascinating mix of her heritages with old world and new world sensibilities; a pioneering spirit; natural patient reserve and gregarious quick laughter; strict almost to the point of austerity with herself and unbelievably loving and generous with those around her; devotedly supportive of her family and whimsically impulsive, adventurous and strong-willed (her brother Dick would call it 'high strung') AND at the same time – a uniquely unconventional individual who was comfortable just being herself.

In the late 50's when Barbara was a young working woman, she and a woman friend traveled to Europe together. She also visited relatives in Germany, and another European trip was devoted to skiing.

One year at Christmas in the 60's Barbara brought her nieces and nephews a ping pong table and all the fixings…the story came out that in supporting a cause in Cranford, Barb had purchased a raffle ticket and much to her surprise and delight, had won 'a TABLE TENNIS set' that included net, paddles and ping pong balls… since she wanted to gift these prize goodies to us, she had decided that she simply had to invest in the only thing missing from the set, the TABLE, to complete the gift. This led to many years of energetic fun for the family at the holidays, and many other times.

Barbara was active in the Short Hills (NJ) Outing Club, which sponsored hiking trips around the NorthEast, and the Short Hills Ski Club, which ran winter ski trips in New England, and eventually purchased an old farmhouse for use as a ski lodge in Lower Granville, VT. Barbara was one of the club's ski racers, and organized some of the races. She met Dwight Sipler on one of the ski trips and they married in 1966 in Cranford, NJ. They then moved to Pittsburgh, PA, where Dwight started graduate work at the University of Pittsburgh. Before moving to Pittsburgh they took a 10-week trip by car to Alaska, camping most of the way (back then the Alaskan highway was not paved for 1200 miles through Canada). In Pittsburgh, Barbara, using her newspaper training, took a job as public relations director with the Allegheny Intermediate Unit, a school service agency that provided resources such as busing and film libraries to regional schools. Barbara was the breadwinner while Dwight was a poor "starving" student.

After spending 16 years in Pittsburgh, she retired from the paying job and they moved to Stow, MA in 1982. In 1988 their lawn mower died and Dwight bought a tractor, and small farm (on Great Road) was born. Dwight had been looking for some land for a farm, going out as far as Hardwick MA, and even further. Barbara finally said "We're not buying a farm unless it's right around the corner". In 1992, Wendell Stephenson put his farm up for sale, and it was right around the corner. It took a couple years to clean it up enough to grow things without poison ivy as weeds, and in 1998 the farm stand at home moved to the new location. PS: small farm, being small, is written in lower case by Dwight. As a newspaper editor, this bugged Barbara immeasurably.

Holiday time was a great source of excitement for the family. Board games, caroms and "Pit" brought us all together. Their presence in our midst is a catalyst for fun. With lots of kids at Christmas, there was the inevitable research on the pile of presents. One large box was wrapped in multiple layers of tissue paper. When the kids would press it down they could just barely make out the printing on the box, which said "Elephant Foot Umbrella Stand". When the box was opened it turned out to be a game of Skittles. Another Christmas present was based on Barbara's mother's family story about gift boxes of candy. An old box was saved, and if you got a candy that wasn't one you particularly liked, it went in the "spitback box". So one Christmas the family got a box of "Russel Spitback" candy. When it was opened, there was a bite out of every piece. After the family was sufficiently grossed out, the next present was a specially fabricated knife that simulated tooth marks, and had been used to take the bites out of the candy. Naturally there were large bites out of the butter and other meal items that year. Since then, misleading packaging has been SOP at Christmas.

Through the years, Barb and Dwight invited and welcomed the nieces and nephews into their home in ones or twos for a longish week's summer sojourn without the rest of the family, just at that moment when they were ready for it. Barb had such an uncanny knack for making people feel at home there, but like young adult friends rather than just kids. During those visits, Dwight weathered the storm of our cooking in residence adventures with only a few wry, good natured puns. It is a testament to Barbara's charms and love that Dwight married Barbara even though he'd met a quorum of the family before he said 'I do' and had a fair notion of what he was getting himself into.

Barbara came from a small town (by New Jersey standards) and learned there that small towns need active citizens, so she became an active citizen in Stow. She served on several Town committees in Stow and was chair of the Ancient Documents Committee for many years. She was president of the Stow Historical Society for about 20 years, during which time several books were written on Stow history, to some of which she contributed.
When she moved to Stow, she started looking for a church. The Acton Congregational Church was one that she visited. When she was greeted warmly by the church members after the service, and was also visited by one member to encourage her to attend, she decided that was the place that had the nearest thing to family that she had seen so it has been her church for the last 34 years (she outlasted a couple of long term ministers [although one of them had a significant head start]).


Barbara was hospitalized during her 84th birthday, so the Town threw her a party at small farm. About 75 people attended with one day's notice. The remnants of the potluck party were used to feed the family for the next month or more.

In sparkling snow - in brightest morning sun
In shadow patterned valleys, sleeping, still,
In icy streams that chuckle as they run

Here shall I stay - forever to remain
To live with thee my sweet although unseen
With all the common, lovely things of earth
I cannot leave the place my heart has been