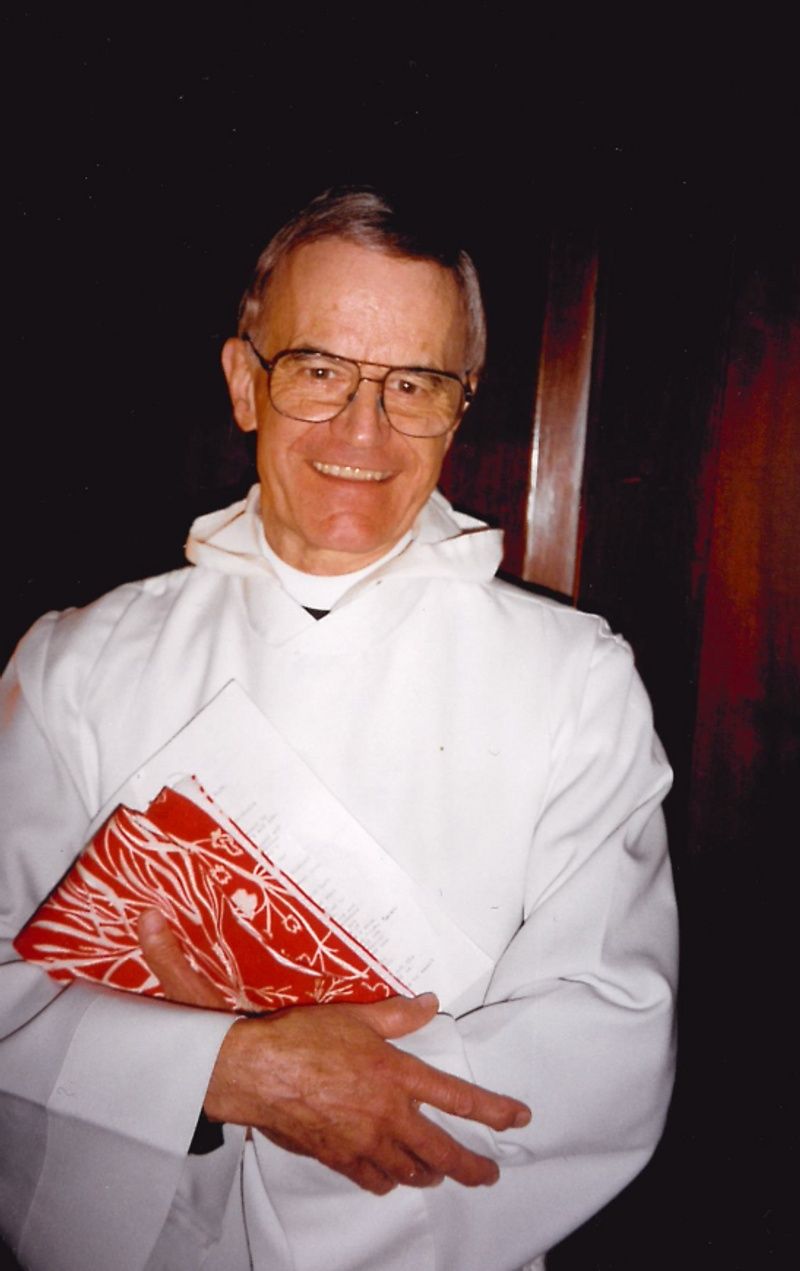 Brian Scott Kelley, an Episcopal priest, poet, civil rights activist and compassionate advocate for the marginalized and vulnerable, died peacefully at his residence in Concord, Massachusetts on April 6, 2021. He was 92 years old. "Brian's central belief was that God calls us out of our pews and into partnerships to respond to the needs of the world," remembers the Very Rev. Jep Streit, Dean Emeritus of Boston's Cathedral Church of St. Paul, where Brian was a member of the clergy and Cathedral Canon of Social Action.

Descended from a long line of Anglican clergy, Brian was born on September 20, 1928 in Quebec City, Canada, to Mary Scott Kelley and Arthur Reading Kelley. A consummate scholar with a thirst for knowledge, Brian was a lifelong learner. Upon earning a bachelor of arts degree from Bishop's University in Sherbrooke, Quebec, and a masters in education from Montreal's McGill University (where he met his beloved wife Sara), Brian followed in the footsteps of his father and grandfather by becoming an Episcopal priest. After graduating from The Episcopal Divinity School in Cambridge, Massachusetts in 1957, Brian served in the Diocese of Quebec and was ordained there. In 1960, Brian and Sara (who had married on September 9, 1956 in Greenwich, Connecticut) returned to Massachusetts, where Brian served as Rector at Saint John's Church, Charlestown.

While at Episcopal Divinity School, Brian had become involved with efforts to challenge the conscience of the church with respect to social and racial inequality; upon his return to Massachusetts, he became active in the civil rights movement and joined the Episcopal Society for Cultural and Racial Unity. In 1962, Brian traveled to Albany, Georgia to join the "Albany Movement," marching with protesters and bearing witness in the courtroom during the trial of Martin Luther King, Jr. and Ralph Abernathy. In June 1963, Brian joined a delegation of Episcopal clergy who traveled to Jackson, Mississippi to attend the funeral of famed civil rights activist Medgar Evers and, later that summer, participated in the March on Washington. Brian again traveled south in June of 1965, heading to Philadelphia, Mississippi to join those continuing James Meredith's March Against Fear following the wounding of Mr. Meredith by a gunman. Sara also participated in the movement, marching in the final leg of the Selma to Montgomery March for Voting Rights in March 1965.

Brian continued to write and preach about social and economic justice, including injustices he saw in his adopted city of Boston. After earning a doctor of education degree from Harvard University in the early 1970s, Brian served as Assistant Headmaster of one of the first pilot schools in Boston. The Massachusetts Experimental School System focused on creating opportunities for student learning through experience and group relationships, encouraging students to seek to "produce constructive changes in the urban environment, and to perceive cultural, ethnic, economic and religious differences as a potential source of enrichment rather than as a threat."

Troubled by the plight of Boston's ever-increasing population of homeless and disenfranchised individuals, Brian, resuming his full-time ministry at the Cathedral, created Social Action Ministries, an interfaith organization dedicated to serving the needs of the City's most vulnerable. "No one did more in Boston in his era to move us all – politicians, state workers, advocates, people of faith, religious institutions – to a wider view of the poorest and our responsibilities to them," states Philip Mangano, who worked with Brian at Social Action Ministries, now known the Massachusetts Housing and Shelter Alliance (MHSA). "That long history he had in the civil rights movement, informed by his resilient faith, served him well in his interactions with mayors and public officials, seeking their support on behalf of the most vulnerable. Speeding around Boston on his throwback Raleigh bicycle, meeting with any who asked and working to create impactful initiatives, he was a hero to many, including myself, and—as priest and canon—a symbol of God's grace to thousands more."

Today, MHSA draws upon the expertise of nearly 100 member agencies statewide to develop and advocate for innovative housing and support services for the state's most vulnerable. MHSA's annual Canon Brian S. Kelley Public Servant Award honors those whose work best reflects Brian's dedication to ending the crisis of homelessness. "There is not a single movement in Boston to do with seeking relief for the poor, and economic and social justice that seek to alleviate what makes people poor, that did not have his mark on it. In particular, he was a driving force around addressing the scandal of homelessness in Boston," shared Joe Finn, MHSA's President and Executive Director.

A lifelong poet, in his retirement Brian was able to dedicate more time to his writing, and he joined several poetry groups, including the Writers Workshop at UMass Boston's Joyner Center and the Antlers Writing Workshop in Wonalancet, NH. Brian's poems are published in several collections. Upon learning of his death, a fellow poet offered these words about Brian: "Our loss of a very wonderful man, an uplifting preacher at our Chapel, our sweet close friend, a great dancer, beloved family man, determined conservationist, and a lovely poet. Thanks be to God for him, and our time together."

Before moving to Concord in 2016, Brian and Sara, an early childhood educator, lived in Boston's South End for 50 years, where they raised their three children. Throughout their life together, Brian and Sara were dedicated patrons of the arts, attending plays, concerts, readings, and countless museum exhibits. Avid hikers, skiers, gardeners and contra dancers, they enjoyed year-round activities with family and friends at their second home in South Tamworth, New Hampshire, which continues to be a gathering place for all.

In addition to his wife, Brian is survived by his son, Michael Scott Kelley (Alicia) of Maynard, Massachusetts, his daughter Charlotte Kelley Kingham (Barry) of New York City and his daughter Jennifer Kelley Reed (Jeffrey) of Newton, Massachusetts, and by his cherished grandchildren: Kristen, Julia and Daniel Kelley, Madeleine and Nicholas Reed and Victoria and Will Kingham. A dedicated father and grandfather, Brian enjoyed getting into "good mischief" with his grandchildren, reveling in their activities and adventures together throughout the years. Brian is also survived by his sister, Helen Morrison, as well as by numerous nieces, nephews and cousins, at many of whose weddings he officiated. He was predeceased by a daughter Allison Brooks Kelley, and by his siblings Frederick Kelley, Frances Kelley and Rosemary Cartwright.

A devoted husband, father, grandfather, sibling and friend, Brian was the essence of his being until the very end, a gracious, compassionate and loving individual.

"Brian reflected a transcendent love during his life and impacted thousands of lives throughout his pastoral career," observes Joe Finn. Adds Mr. Mangano: "We all loved him and 'tolerated' Brian's expansiveness, not knowing that by osmosis we were having our spirits and souls stretched by him."
The family would like to thank the dedicated caregivers who helped to support Brian in his later years.


Memorial services will be held in both Concord, MA and South Tamworth, NH at a later date.

In lieu of flowers, donations may be made in Brian's name to:

The Massachusetts Housing and Shelter Alliance
PO Box 8638
Boston, MA 02114
www.mhsa.net
or
The Manna Program at Saint Paul's Cathedral
138 Tremont St.
Boston, MA 02111
https://www.stpaulboston.org/manna.
MANNA (Many Angels Needed Now and Always) is a ministry of and with the homeless community in downtown Boston