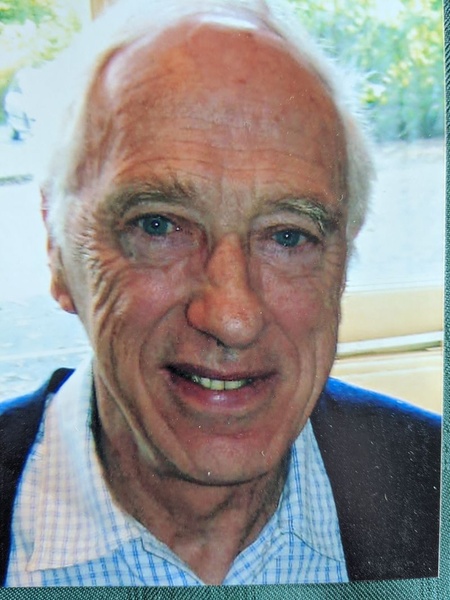 Brian P. Sandford (85) passed away on April 21, 2020 due to complications from COVID-19. He was a resident of The Commons in Lincoln, MA and previously a 48-year resident of Concord, MA.

Brian was fascinated by every branch of science. He earned a first-class honors degree in physics, and then his master's at Victoria University of Wellington, in New Zealand.

His first job was with the Department of Scientific and Industrial Research office in New Zealand, beginning his interest in aurora. And in 1958-1959, he led a team studying aurora at Scott base in Antarctica for 14 months as part of the International Geophysical Year (IGY). He received a Polar Medal from Queen Elizabeth II for his work.

Upon his return, he reported his results at IGY conferences in the U.S. where he met with aurora researchers in Boston and was introduced to similar work at the Air Force Cambridge Research Laboratories' Geophysics Directorate at Hanscom Field in Bedford, MA.

During this time, he met Jean Low, a Briton who had come to work for Mass General and asked her to marry him. He then headed back to Antarctica for another six months while Jean traveled the world. They reconnected in New Zealand to be married in April 1963.

After the birth of their two children, the couple settled in Concord, MA in 1968. Brian had accepted a position with the AF Geophysics Laboratory at Hanscom AFB, Bedford, MA to guide a program to acquire a worldwide set of visible and infra-red optical aurora and airglow data for the Air Force. Brian's team utilized a specially outfitted C-135 airplane as a laboratory, and he flew some 2,500 hours over more than three decades culminating in the Department of Defense's database on aircraft EO/IR signatures, which is a legacy.

He also represented the U.S. as a NATO scientist, attending meetings with colleagues all over Europe. After retirement, he continued on as a Scientist Emeritus and then as a consultant with Aerodyne and SSI lecturing at Georgia Tech Research Institute.

Beyond science, Brian had a passion for international travel. He amassed a vast collection of New Zealand stamps. He was also a lifetime member of the Captain Cook Society, studying the colonial world explorer's logs and memorabilia. Throughout his life, he loved nature walks, and more recently was keen to play bocce and enjoy painting classes at The Commons.

Brian is survived by (Alison) Jean Sandford his wife of 57 years, of Lincoln, MA; his son Mark Sandford, daughter-in-law Kristin, and grandsons Douglas and Andrew of Mission Viejo, CA; and his daughter Judy Sandford of Irvington, NY. He is predeceased by his older brother Neil in 2013 and younger brother Keith in 2020.

A Celebration of Life will be announced when the circumstances allow.

Gifts in Brian's memory may be made to:
Emerson Hospital
133 ORNAC
Concord, MA 01742
https://www.emersonhospital.org/support-emerson/donate-now