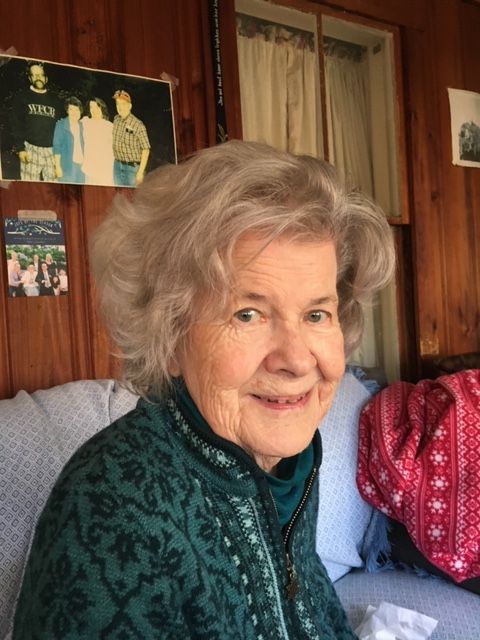 Caroline V. (Petersen) Holden, age 92 and life-long Concordian, passed peacefully in her sleep on Friday, May 1, 2020 in her home in West Concord, having been comforted by the singing of old-time hymns she loved by a friend and family members. She was the loving and devoted wife of the late Hollis R. Holden.

Born in Concord, MA on June 27, 1927, Caroline (affectionately known as "Petey") was the daughter of the late Ludvig Petersen and Kirsti (Andersen) Petersen who left Norway at the tender age of 18, work visas in hand, and settled in West Concord where they met, married and had eight children together (Henry, Clarence, Leslie, Andrew, Cornelia, George, Caroline, and Gordon).

A sweet-tempered, hard-working girl, Caroline grew up in West Concord and graduated from Concord-Carlisle High School—a diligent, well-rounded student who served as a class officer, was elected to the National Honor Society, and received the Daughters of the American Revolution Good Citizens Award. Subsequently, she put herself through Pierce Secretarial School in Boston. In addition to working as a secretary (such as at the Appleby & Wyman Insurance Agency in Concord and later at Acadian Utilities in West Concord), Caroline spent countless hours volunteering to help others. Whether in "formal" capacities—such as a Sunday School teacher, a Girl Scout helper, a candy striper at Emerson Hospital, a friendly deliverer of Meals on Wheels, or a neighborhood canvasser for a worthy cause—or simply offering someone a meal, a ride, or flowers and vegetables from her garden, Caroline was a quintessential giver.

On a blind date in her early 20's, Caroline ("Petey") met Hollis ("Holly") Holden—at first glance, a gentle, unassuming young man but such a strong leader on the dance floor! Her wish that he would call on her again so that they could dance some more was granted. They married in 1950 and settled in West Concord where they had two children whom they raised with lovingkindness. Neighborhood children, now adults, still reminisce about playing croquet, sledding, fishing, boating and skating on the pond, and playing the player piano at the Holden's. A homebody par excellence, Petey loved to cook, to garden, and to spend time with family and close friends, including animals (especially dogs). A sports enthusiast, both as a participant and a fan, Caroline had her own unique moves on the tennis court, playing well into her 70's with her friends, family and at local tennis clubs. She especially enjoyed Newport Tennis Club matches where she boldly approached tennis legends such as Bjorn Borg and Jimmy Connors and asked for their autographs while Holly took pictures of them. She also graced the Sons of Norway Christmas Bazaars with her presence, sporting her bunad (traditional Norwegian costume—a gift from her cousin in Norway) while Holly helped at the cheese table. However, their favorite place to be together was on the dance floor where, becoming one with each other and one with the music, they flowed in effortless grace, oblivious to the admiring glances of many beholders.

Caroline is pre-deceased by all of her siblings, her husband Hollis R. Holden, and her son Gary P. Holden (legally self-identified as Blue Sky) and daughter-in-law, Joyus Fox-Sky; she is survived by her daughter, Nancy Holden-Avard, son-in-law, Frederick Avard, and granddaughter, Rebekah Holden-Avard, and numerous nieces and nephews. The embodiment of thoughtfulness, Caroline was a selfless, passionate, devoted and generous wife, mother, grandmother, aunt, neighbor and friend who will be greatly missed.

Given the current situation, a private graveside service will be held at Sleepy Hollow Cemetery on Friday, May 8, 2020.

In lieu of flowers, donations in her memory can be made to;