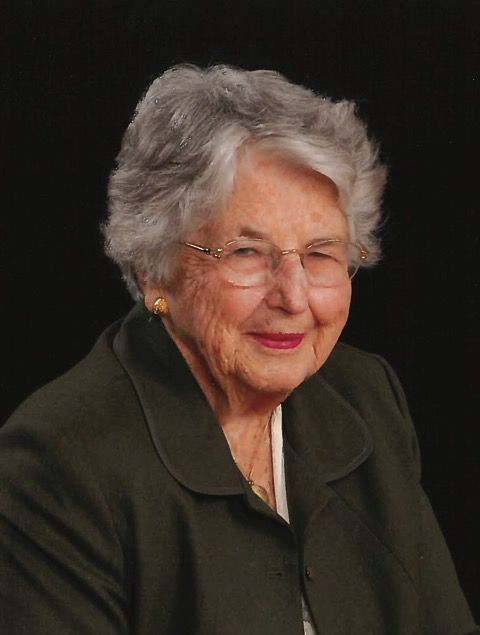 Caroline "Kerrin" Warren, 92, a resident of Yellow Springs, Ohio from 1952 until 1979, died peacefully on August 28, 2016 in Concord, Massachusetts. She lived at Rivercrest, the skilled nursing facility of Newbury Court, a retirement community to which she and her husband, Bill Warren, moved in 2009. The cause of death was complications of pneumonia, in the context of her late-life struggle with vascular dementia and a complex of other chronic conditions.

Born Caroline Harker Morris in 1924, she was the first child of Caroline Owens and Llewelyn Morris of Poultney, Vermont, where her father worked in the slate quarries. With her younger sister Florence, she grew up in Poultney's Welsh-American community, spoke Welsh as her first language, went to the Welsh church, and during the Depression delivered her mother's baked goods on roller skates. She attended the local public schools and graduated from Poultney High School as valedictorian of the class of 1942. She enrolled in Oberlin College, Oberlin, Ohio, where she reveled in the academic life she craved, and graduated with a major in English Literature in 1946. On the first day of classes, to hear her tell it, she met the man she knew she would marry – and indeed Kerrin and Bill were married in 1947, after he returned from Naval service in the Second World War. She treasured her experience at Oberlin throughout her life.

As she described it, Kerrin had a motley career. In Oberlin she taught high school English and served as administrative assistant at the college. Upon Bill's graduation in 1948, they moved to Chicago, where she thrived conducting library research for Encyclopedia Britannica. In 1952, they arrived in Yellow Springs, where she worked as administrative assistant at Antioch College, as homemaker, and as archivist, cataloging the papers of Arthur Morgan with her good friend Ruth Bent, which she found endlessly fascinating. Her greatest joy was serving as a devoted parent of two sons. She loved being a mother, even when they tested her mettle with cross-country bicycle trips and wet cave spelunking. A highlight of this period was the family's sabbatical semester on the then-remote island of Kauai, Hawaii, which strongly influenced her color palette thereafter.

After Kerrin and Bill moved to Silver Spring, MD, in 1979, she managed with notable success her own stock market portfolio. A talented craftsperson, Kerrin's hands were never idle. She knit countless sweaters, hats, scarves, and mittens, and needle pointed wall-hangings, pillows, and art pieces, most of which she gave away or contributed to local charity bazaars – including a new parament for the Silver Spring Presbyterian Church with 150,000 stitches. When Kerrin and Bill retired to New Haven, Vermont, in 1989, she became an avid flower gardener and grew deeply involved in the Middlebury Congregational Church. She loved living in rural Vermont and created the perfect country farmhouse for four visiting grandchildren.

Kerrin was unassuming, sociable, compassionate, ebullient, and competitive at any game. She made new friends on every bus ride, forged deep bonds with others, and frequently extended a helping hand to those around her. Throughout her life she contributed to her community, volunteering in church, school, and community groups. Always a skeptic, never an ideologue, she often played devil's advocate yet her values were crystal clear. She was endowed with a "third eye" through which she observed life's absurdities and contradictions, frequently offering a wry comment. Her sons remember her as fiercely loving, intellectually alive, boundlessly energetic, the emotional center of the family, who nevertheless refrained from advising them on how to raise her grandchildren.

Her family and friends will gather to celebrate her life on Saturday October 29 at 10:30 a.m. in the Congregational Church of Middlebury, VT, where she was an active member for more than 20 years (no flowers, please). Memorial gifts may be made to Oberlin College, designated for the William H. and Caroline Morris Warren Scholarship Fund, and mailed to Oberlin College Development Office, attn: Catherine Gletherow, 50 West Loraine St., Oberlin, OH 44