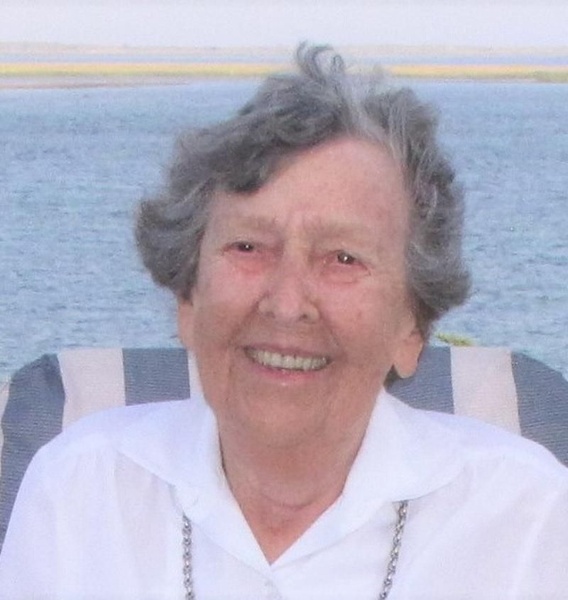 Charlotte Brooks Read of Concord died peacefully at home on May 13, 2018. She was 97. She was the daughter of Judge Lawrence Graham Brooks and Susan Morris (Hallowell) Brooks, and wife of the late Charles Rodes Read. A lifelong Quaker, Charlotte was born in Bourne, MA and grew up in West Medford, attending Shady Hill and Winsor School. At Smith College, she earned a B.A. in History with a minor in Music, graduating in 1942, and she later worked at the Massachusetts Eye & Ear Infirmary.

As WWII continued to rage overseas, Charlotte entered the Relief & Reconstruction Program at Haverford College (PA) for training in postwar relief work. In 1945, she was sent to France by the American Friends Service Committee (Quaker) to work in clothing and food distribution in the devastated area of Caen, regularly driving trucks to deliver provisions. Later she led clothing distribution teams in the German cities of Ludwigshafen and Freiburg.

While posted in Europe, Charlotte fell in love with her future husband Charles, of Kentucky, who helped direct Quaker relief efforts in France and Germany. They married in Paris in November, 1947 in a Quaker ceremony. Due to ongoing shortages of food supplies, Charlotte's parents brought with them from the U.S. a fruit cake to serve as a wedding cake. After completing their assignments in Freiburg, Charlotte and Charlie spent eight months aiding refugees in Gaza in 1949-50, where Charlotte led milk distribution.

Returning to the U.S. in 1950, Charlotte and Charlie settled in Germantown in northwest Philadelphia, where they raised 4 children. Over the years, Charlotte frequently volunteered at the AFSC and in Germantown, including tutoring at the local public school. She was active in Germantown Monthly Meeting (the Quaker meeting the family attended), and at Germantown Friends School where she served 18 years on the school committee. She and Charlie delighted in hosting visitors at their home.

Charlotte shared with her family her deep love of the outdoors that grew from her childhood family summers on Cape Cod and in the mountains of New Hampshire. She was a fine horseback rider, skier, and sailor, and loved skippering the "Quawk", her father's Catboat, on Pleasant Bay. She taught her children and grandchildren to sail, and she regularly impressed them with her knowledge of flowers, bird songs, and the night sky. Charlotte also shared her love of music, and often accompanied her young children on piano as they practiced their own instruments.

In 1987, Charlotte and Charlie retired to Carlisle, MA to be closer to their children and grandchildren, and they joined Framingham Friends Meeting. Charlie passed away in 1997, and in 2004 Charlotte moved to Newbury Court in Concord, where she encountered old friends and made new ones. Looking back, Charlotte was grateful to have had the opportunity to serve in the cause of peace and reconciliation, and for the lifelong friendships with her colleagues. She was also deeply grateful for the wonderful relationships she enjoyed with her grandchildren. Throughout her life, she treasured her family, her neighbors, and community.

Friends and family are invited to a memorial service on Sunday, June 10, 2018 at 2:00 p.m. in the Duvall Chapel at Newbury Court, 80 Deaconess Road, Concord, MA.