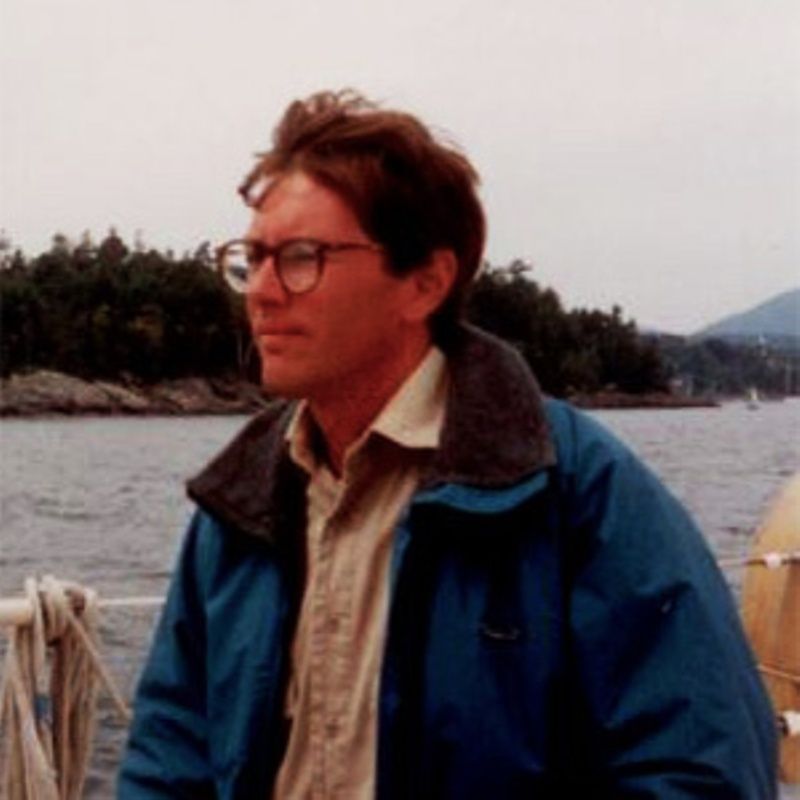 Born January 9, 1949 in Jamaica, Queens, New York, to Patricia and Moody Brown, Chris was the first of what became a family of four siblings. At the behest of the Navy, the young family crossed the Atlantic to London for a few years where Chris attended Eton pre-school, before returning to eventually settle in Pittsfield, MA. Through the years growing up there, Chris became an excellent skier, an adept golfer and tennis player, an avid swimmer, and an always curious student, both in the classroom and in the natural world. Having three younger sisters instilled in Chris an appreciation of, respect for, and a gently teasing manner with women for all his life.

In high school and as a young adult Chris expressed himself through music. Playing guitar for Smashed, Inc., his rock and roll band, learning the sitar, singing in the choir for the Lenox School at daily church services, and mastering disco dancing in the 'seventies. His choir days gave him a lifelong appreciation for Anglican hymns; his soul was stirred whenever he heard a descant sung.

Graduating from Lenox School, a private Episcopal school for boys in 1966, he enjoyed competing on the soccer and squash teams. Chris soon became immersed in the turbulence of the late 1960s and early 1970s. Eschewing for the time being a traditional path, Chris sought meaning in alternative realms, rebelling, exploring ideas and philosophies, finding peace in nature.

His time of exploration gave Chris a clear vision for his life; as he reached his mid-twenties, he was ready to pursue new goals. He completed his undergraduate and masters' degrees in three years, graduating from Boston University in 1975. At school, he discovered his high aptitude to program and diagnose computers—the detailed logic and problem solving it required matched his mental ability to solve complex puzzles. He embarked on a career in information technology, working for financial and property management companies through the 1980s, then launched his own business in networked systems support in 1994. He supported a variety of small- and medium-sized businesses for twenty-five years.

In 1981, Chris met his eventual wife and love of his life, Lise Karen Stahl. They began as co-workers, became friends, and later started dating. Lise quickly learned that Chris had many passions that he dove deeply into, which would become her pastimes as well. Two from their early years together were wine and sailing. Chris studied the French vintages (excellent in the 1980s), purchased and laid down select Burgundy and Bordeaux wines. Some of these he still was enjoying sharing, most recently for his birthday dinner. Together they enjoyed Boston area game dinners featuring wine pairings for each course. Chris sailed competitively in Boston Harbor after work and encouraged Lise to learn to sail so that they would be able to enjoy cruising together. They had many sailing adventures up and down the New England coast, alone or with friends. Chris was happiest on a boat, enlivened by the constant challenge of reading, sensing and feeling the currents of air and water, using all his faculties to bring himself and his shipmates to safe harbor at the end of an exhilarating day sailing close to the wind.

Chris and Lise were married in 1988, moved to Concord, and welcomed their son Matthew in 1989. Chris was a devoted husband and father. He led Matt's Cub Scout den, taught him to ski and play golf, and encouraged Matt to pursue learning and his own interests. He enjoyed sharing meals with family and friends, finding just the right wine to accompany Lise's gourmet dishes, and always exclaiming at the end of the meal, with great pride and admiration, "You've done it again!"

The family spent many happy vacations on Nantucket, on Cape Cod and for twenty years went to Smugglers Notch in Vermont for skiing. They had enjoyed another winter vacation together in Vermont just before Chris passed away. Lise and Chris had special vacations in England, driving the southern coast; in Paris with Matt for their 25th wedding anniversary; in Barbados; and last summer, driving the Pacific Coast Highway from Santa Monica to San Francisco. Chris was an excellent travel companion who reveled in discovering new places and long road trips. In recent summers, Chris and Lise enjoyed kayaking on quiet waters, salt and fresh, and he was developing skills at kayak fishing.

About ten years ago, Matt introduced his dad to a competitive pool league in the Concord area. As he did with all new pursuits, Chris threw himself into learning and mastering the game. He read every book he could find, watched endless videos of pro play, and practiced daily on his table at home. He led two teams to league championships and the chance to compete nationally in Las Vegas in 2019. As much as he savored the victories, he also immensely enjoyed the friendships he made during weekly matches.

In addition to Lise and Matt, Chris is survived by his father, Moody Burt Brown of Lenox, MA; sisters Barbara (David) Hawkins of Brookline, MA; Deborah (William) Travers of Darien, CT; and Nancy (Philip) Moss, also of Darien. Also affectionately remembering Chris's silly jokes and goofy magic tricks are his nieces, nephews, and godchildren Whitney, Lauren, Jack, Charlie, and Dalton as well as his many cousins, sisters- and brothers-in-law. Chris was predeceased by his mother, his beloved "Multsa", Patricia (Horn) Brown in 1992.

A celebration of Chris's life will be held Saturday, February 22, 11 am at St. Anne's in-the-Fields Episcopal Church, Lincoln, MA, followed by a reception. Burial will take place later that day at Woodlawn Cemetery, Wellesley. In lieu of flowers, donations in Chris's memory may be made to the Massachusetts Audubon Society Pleasant Valley Wildlife Sanctuary, 472 W Mountain Rd, Lenox, MA 01240 or to the music fund at St. Anne's in-the-Fields Episcopal Church, P.O. Box 6, Lincoln, MA 01773.