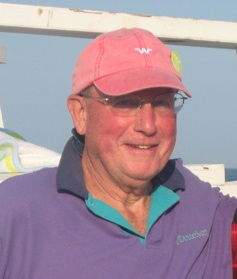 Christopher "Kit" Guerin Carmody, 77, passed away on August 1, 2016 at The Commons in Lincoln, MA. He was the beloved husband of Carol Lovell Carmody and proud father of Christopher, Francis, Meagan (Mayers), and Nelle.

Born in Waterbury, CT on February 26, 1939, Kit was the son of the late Honorable Guerin "Gee" and Sally Merriman Carmody. He was the third generation of Carmodys to attend and graduate from Canterbury School in New Milford, CT, living for a time in the famed Carmody Hall. Kit went on to attend and graduate from Georgetown University in 1961, earning a Bachelor of Science degree in Economics. After successfully completing the Reserve Officer Training Corps program at Georgetown, Kit was commissioned as an officer in the U.S. Army and served his country during the Cuban Missile Crisis. He was honorably discharged from active service as a Captain in 1963, though continuing service in the Reserves until 1969.

After his discharge from the Army, Kit began his career in finance at the Riggs National Bank in Washington D.C, later moving to Connecticut Bank and Trust Company in Hartford, CT. Kit subsequently moved to Boston to work for The First National Bank of Boston, and met and married Leonie (Luterman) in 1975. In addition to his step-children, David Sherman, Jonathan Foley Sherman, and Leonie Sherman, together they had Christopher, Francis, and Meagan. After his first marriage and many years as a Vice President at Bank of Boston, Kit met Carol on her first day on the job at the bank in 1987 and they later married in 1993, moved to Lincoln in 1994, and joyfully welcomed Nelle to the family in 1999. Nelle currently attends Kit's alma mater and proudly represents the fourth generation of the Carmody family at Canterbury School. Kit continued his career in finance with positions at Merrill Lynch, Carolan and Company and Oppenheimer.

Kit's passions were his faith, his family, farming, and sailing. A devout catholic, Kit was a faithful parishioner of St. Joseph Catholic Church in Lincoln for over twenty years. Kit also was very committed to the Lincoln community and local farming. After more than 40 years in banking, Kit retired to pursue his interest in local farming and proudly served in many capacities at Codman Community Farm, including Director, President of the Board, Assistant Farmer, and Director of Development. Kit was also a lifelong and passionate sailor, and the "Skipper" could be found on many sunny days in Weekapaug, Rhode Island loudly instructing his wife and daughter Nelle (who quickly surpassed the sailing skills of her dad), while sailing on the family Beetle Cat.

Along with his wife, Kit is survived by his loving children, Christopher Carmody and wife Moire, and their two children, Liam and Seamus, of Sudbury; Francis "Fran" Carmody and wife Margery, and their son, Peter, of Sudbury; Meagan Louise Mayers and husband Toby of Pepperell; and Nelle Guerin Carmody of Lincoln. Kit is also survived by his sisters Sally Reeves, and her husband Rick, and Laurie Carmody both of Florida, and many nieces, nephews, grandnieces, and grandnephews.

Family and friends will gather to honor and remember Kit on Sunday, August 7, 2016 from 4:00-6:00 pm at the Concord Funeral Home, Belknap and Thoreau Streets. Concord, MA. Kit's funeral mass will be on Monday at 10:00 am at St. Joseph Church, 142 Lincoln Road, Lincoln. Burial will follow with U.S. Army Military Honors at Lincoln Cemetery, Lincoln.

In lieu of flowers, donations in Kit's memory may be made to Canterbury School, 101 Aspetuck Ave., New Milford, CT 06776.