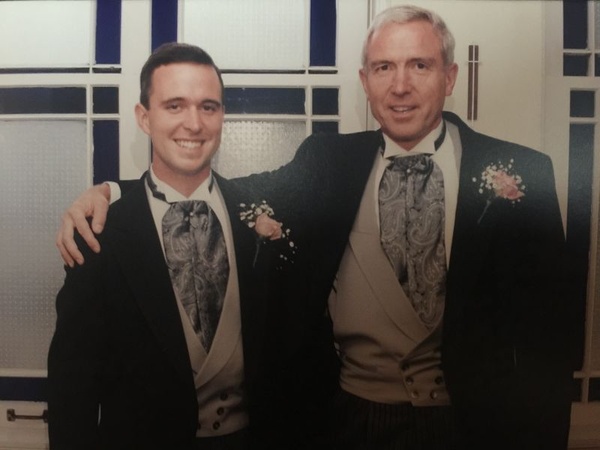 He is survived by his partner-in-life Cathy Gates, son Scott, daughter-in-law Deb, grandkids Nate and Zach, sisters Liz Adams and Ginny and Bradford Gray, and his former spouse Ginny. He is also survived by his cousins Tom, Nan, Mary, Essie, and Bob; and, Cathy's sisters and brothers-in-law.

Mike was a die-hard Celtics fan who loved playing the game; he was a life-long fisherman, swimmer and runner. Mike spent many years in Human Resources in the banking and high-tech industries, in high school teaching, and as a swimming instructor. To top it off, he got a law degree and passed the bar at the age of 64. Mike proudly served in the U.S. Air Force during the Vietnam War where he earned a Bronze Star and later rose through the ranks to Lt. Colonel within the Reserves.

Mike enjoyed all of his professions, but one stood out in a note to his grandson, "I love to teach swimming and help people learn to be safe around the water more than any other job I've ever had in my life. I know I can make kids and adults happier, healthier and safer around the water when I do my job right and I try to improve every day."

More impressive than his resume is the number of hearts and minds that he touched. In his youth, he shared adventure-filled summers and formed deep bonds with family from both coasts in Sodus Bay, NY. He held lifelong friends from high school and from his professions who each meant the world to him. By showing everyone a deep respect with a sincere effort to always help those around him he made an impact on many lives. Whether helping an age-group swimmer learn to dive off the blocks, teaching a budding young Celtics fan about the old guard, cooking dinner for his son's buddies or his partner's relatives, lecturing on the importance of the Constitution or the Bill of Rights, instructing people on the finer points of life guarding, or serving his country - he was in his element, serving others. His son is eternally proud of his hero Dad and will miss his best man more than words can convey.

At a to-be-determined, socially-responsible date there will be a public celebration of life. To celebrate Mike's life virtually in this time of social distancing, please send a story or a photo that you cherish about Mike to his tribute page on www.concordfuneral.com.

Expressions of sympathy can be made by simply going out of your way to serve someone else.