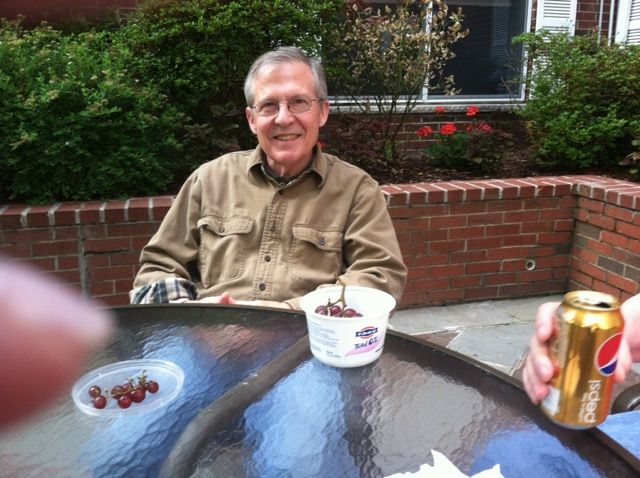 David Ellicott Watson of Carlisle, died peacefully under hospice care on December 15, 2015 surrounded by family and the loving staff at Rogerson House in Jamaica Plain. He was 68 years old and had a happy full life until more than 4 years ago, when a form of early-onset dementia took him on a long, slow journey of many losses.

Dave was born in Wellsboro, PA and grew up in Ithaca, NY, Fanwood, NJ, and Scotch Plains, NJ. He was a life ranked Boy Scout and a counselor at Camp Watchung, NJ for many summers. In 1966, he joined the US Marines Corp and served one tour of duty in Da Nang, Vietnam. Upon return as a Corporal in the Marines, he attended George Washington University, Washington DC, earning a BA in Economics.

He moved to San Francisco and attended Boalt Hall School of Law at University of California at Berkeley. He graduated in 1976 and returned east, settling in Boston, MA. In the fall of that year Dave joined the law firm of Nutter, McClennen and Fish where he specialized in labor relations law. He was elected as a senior partner of the firm in 1984 and later became the Chair of its Labor and Employment Department. Dave was known in the legal community as a fierce negotiator and skillful advocate on behalf of his clients, which included WGBH, UPS, Shaw's Supermarkets and many school departments in the Greater Boston area. He also served as the firm's labor and employment counsel for many years prior to his retirement in 2005.

David and Barbara got married in 1980 in a suburb of Buffalo, NY and moved to Carlisle in 1983. Dave was active in Carlisle politics from 1984-1994. He served a 2-year term on the Personnel Committee followed by a 3-year term on the Finance Committee. He later served on the Board of Selectmen for 3 years. Leaving town politics, he turned his full time volunteering efforts to support both of his girls, first as their softball coach, and then their number one cheerleader when they were in high school and college. His next role was as assistant coach when Catherine coached a 12 & under softball team for three years after she graduated from college.

Dave became active on the Minuteman Arc for Human Services Board, and served one year as President. After retiring, he served area senior citizens as an Ombudsman for Eliot Community Human Services, Lexington, MA. For 6 years, he was a valued volunteer for the Minuteman Senior Services SHINE Program where he helped hundreds of seniors to understand their health insurance and prescription drug coverage options and to select the plan that best fit their needs. He gave so much to so many and derived great satisfaction from this vital role.

Family was very important to Dave. He introduced his family to hiking, camping, cross-country skiing and they visited many US National Parks. He gave his girls the travel bug by taking trips in the USA, Canada and Europe, including an annual NYC trip between Christmas and New Years. The family enjoyed musicals, concerts and theater. He loved working in the backyard and its gardens. He started vegetable gardening at Carlisle's community Foss Farm after he retired, and Barbara continues reaping produce each summer. The extended Watson family vacation was always at Boot Pond, Plymouth MA at his aunt's bungalow. Years of memories created at Boot Pond will be cherished by all.

Dave left behind a loving and devoted family. He was the beloved husband of Barbara Howland of Carlisle, loving father of Catherine Sheehan and her husband, James of Peabody MA and Laura Watson and her fiance, Jamie Burson of Epping, NH. Devoted brother of Daniel Watson and his wife, Thomasine of Watertown and sister, Mary Lou Trumble and her husband, John of Riverside CA, and five nephews and two nieces. Dave was the devoted son of the late John E and Jane C Watson of Seaford, DE. Molly Sheehan, almost 2 years old, was his only grandchild who he immediately loved and they had many smiles and laughs together.

Family and friends will gather to honor and remember Dave on Saturday, February 6, 2016 at 2:00 pm at Trinity Episcopal Church, 81 Elm Street, Concord.