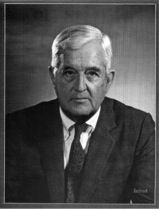 Edward A Larner Jr , age 93 died peacefully at home in Concord, MA, July 14, 2013, after falling the previous day. In 2012 he was predeceased by his beloved wife Barbara after 69 years of marriage. He is survived by his three children, Holly, Ned, & Jamie, grandsons Rusty & Ross Larner, with their wives Julie and Olga Larner, and four great granddaughters, Katrina, Tallulah, Penelope & Rose Larner. He was the brother of the late Priscilla McEwen, Marshall and Chester Larner.

Ed was born in Cambridge to his parents, Eleanor Chaplin Larner and Edward A Larner Sr. He was raised in Lexington and Amherst NH. He attended Dartmouth College, class of 1941, where he was an economics honors major.

Upon graduation he began working in the Boston office of Marsh & McLennan Inc. and completed training at Harvard Business School. During World War II, Ed enlisted in the US Navy and served primarily as Paymaster at the Naval Air Station, Alameda CA. He rose in rank to Lt Commander, returning to Massachusetts in 1946.

During his long career at Marsh, he rose to Senior Vice-President and was a Marsh & McLennan Companies Director. He was also the Boston Office Manager and later Eastern US Operations Manager. He retired in 1985 and remained active as President of the Algonquin Club and the Second Club in Boston, as Treasurer of the Concord Art Association, and as a volunteer at Emerson Hospital.

He was an active member of the Concord Country Club, playing golf into his 90s where in 2013 he was voted an honorary membership at the club. An avid bridge player he helped form a weekly Monday bridge group in the 1980s that still remains strong, although Ed was unable to play the last two years due to macular degeneration. For many years he was a class agent and head agent for his class at Dartmouth, also serving on the Alumni Council there.

Services to be announced.