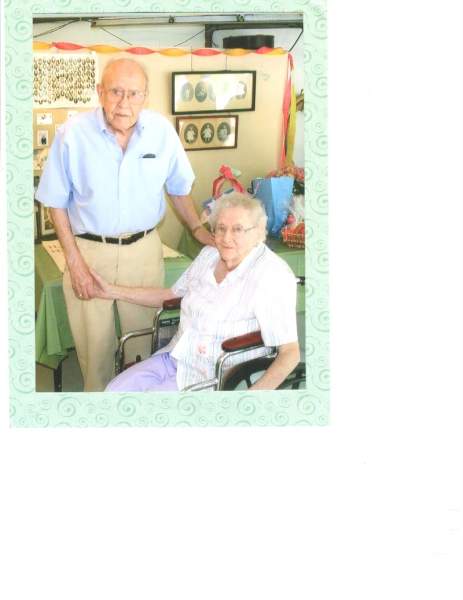 Edwin was born in Portland, Maine on May 23, 1907. Althea was born on November, 10, 1909 in Lexington, MA. They were married on June 11, 1932. They settled in Lexington, where they raised three children. The couple later moved to Woburn,where they lived for 43 years.

Edwin worked for many years as a service manager at the Burroughs Adding Machine Company. He was also a vocalist who sang with a barbershop quartet and was a paid soloist for the Old South Church in Boston. During these years, Althea was a loving wife and mother to her husband and children.

Mr. Sadler was Carlisle's oldest citizen. He was presented with the Gold Headed Cane – Carlisle's Oldest Citizen Award. The cane, a Boston Post cane, was presented by the board of selectmen.

Family survivors include their children, Donna Cantrill and her husband Newel of Carlisle, Bruce Sadler and his wife Lois of Shrewsbury and Keith Sadler and his partner Mary Jo Sims of Alvarton, Kentucky, their grandchildren, Richard Cantrill, Jason and Annie Cantrill, Pamela Cantrill, Stacie and Jim Moffat, April and Paul Mullins, and Philip and Jennifer Sadler. They are also survived by 10 great-grandchildren and several nieces and nephews.

DUE TO THE UPCOMING SNOW STORM THE SERVICE DATE AND TIME HAS BEEN CHANGED
Sunday, February 10th at 2:00 p.m.
Carlisle Congregational Church
School Street
Carlisle, MA