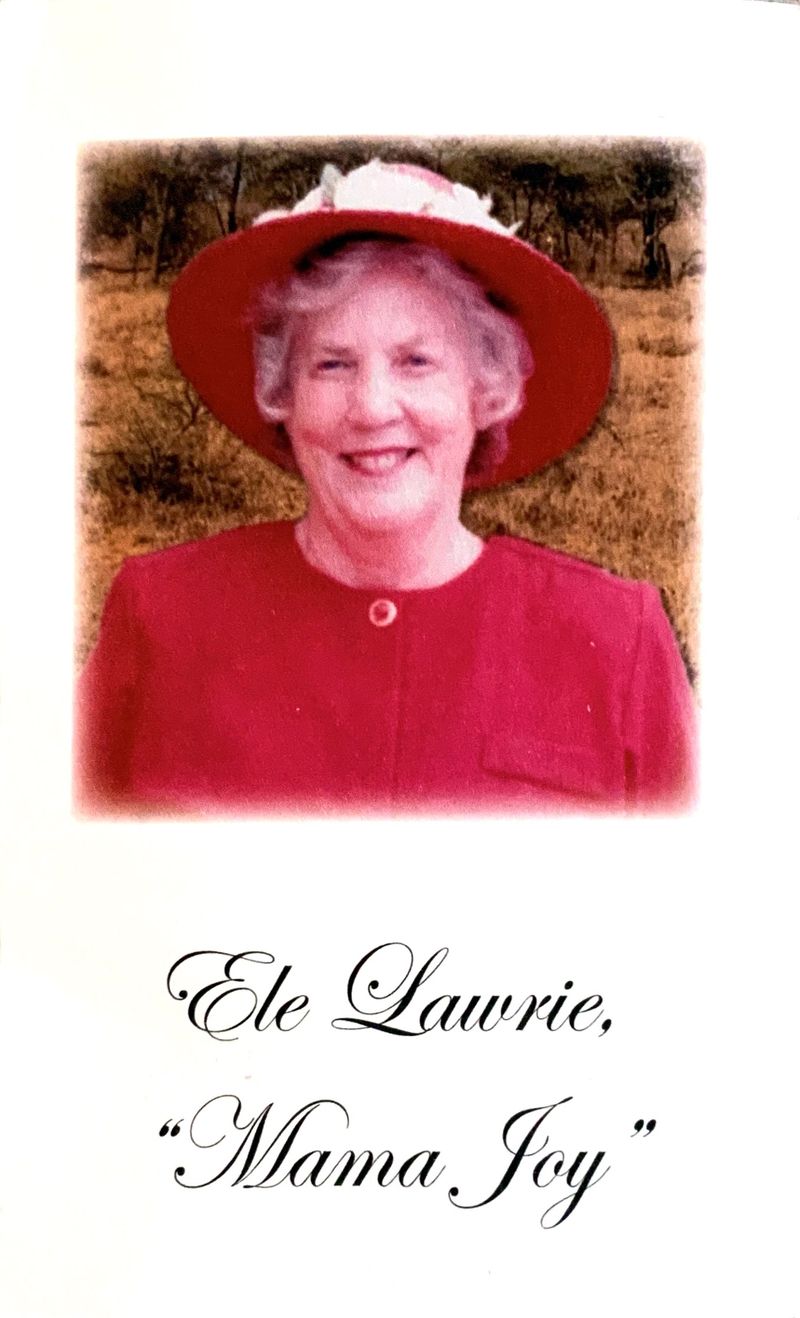 Eleanor Cox was born on March 25, 1927 in Newburyport a daughter to the late Edwin Birchard and Lydia (Trask) Cox. Raised in Newburyport she was educated at Northfield Girls Prep School in Mount Hermon, MA and later attended and graduated from Wheaton College in Childhood Education with a minor in Mathematics.

Ele married on June 26, 1949 at St. Paul's Episcopal Church in Newburyport by Rev. Tyng, the Episcopal Bishop of the Hunan Province of China. The influence of this family put a love for the Chinese in her heart and challenged her to attend missions later.

Prior to her marriage, Ele had her own nursery school/daycare. She moved to Conantum, a new housing development in Concord, with her family. Ele and the other moms formed a playgroup for their preschool children. Ele baked special community birthday and holiday cakes, and everyone loved her 'chili'. She was involved with the Brownies and ran the Girl Scout cookie drive for several years, teaching the cooking badge portion.

After moving to Concord Center with her daughters, Ele enjoyed working with the Concord Players Theatre, her skills from her Vanda Beauty Counselor business to work doing the makeup for various productions.

At the age of 38, some neighbors introduced her to a deeper walk with God, and her life took a turn, which led her to move to Arizona to work with the Inspirational Tape Library, the first of its kind. Her time in Phoenix also included working for Gomper's Rehabilitation Center, the First Baptist Church, and the Arizona Boys' Ranch.

In 1975, Ele was invited to work as the Matron at Elim Bible Institute in Lima, NY, where she took courses to earn certification. After 5 years of redecorating prayer rooms, student lounges, making curtains for all of the dorm rooms, and mentoring students, she was invited by an Elim staff family to help start a Mennonite Church in Pennsylvania, while nursing the wife back to health.

Near the end of her time in PA, at age 56, she was asked by the Missions Dept. at Elim to begin a boarding school for girls in Kenya. This was a packed time for Ele, who found workers to help with the building projects, traveling the area to recruit students and teachers. By the time she left 4 years later, there were 58 girls, and it took a team of people to run the school, which now includes a Bible School on the same grounds.

Ele returned to MA, where she and daughter Cindy joined forces, and took care of Ele's ailing cousin, and became part of a new church planting, New Life Community Church. They also helped with a new Women's Aglow Chapter in the area.

Following her cousin's death, Ele joined Cindy in Kona, HI, where they worked with students and locals in counseling and training with Youth With A Mission's University of the Nations. She traveled with teams in Asia, helping other missionaries with local programs.

In 1997, Ele and Cindy moved to Virginia Beach, VA for Cindy to finish her Master's degree at Regent University, and both furthered their training as counselors. Ele became involved with women's groups and a local Episcopal Church.

Their time completed in VA Beach, the two attended a U of N conference, where they were asked to begin some introductory courses in counseling at a campus in Sweden. They pioneered classes in Norway and Colorado as well. As Missionaries to Missionaries, the counseling offices were constantly busy, providing care to international students and staff as well as locals.

At the age of 84, Ele moved back to Concord, and hung up her traveling boots. Cindy stayed a bit longer, then returned to care for Ele in her home.

Ele loved to teach others how to hug 'heart to heart,' and became the Ambassador of Love and Hugs.

Ele is survived by her children, Virginia Finigan and husband James of Plymouth, Cynthia Lawrie of Concord and Barbara Lawrie of Sacramento, CA, grandchildren, Kathryn Holmes and husband Michael of Concord, Christopher Williams of Concord, Stephanie Finigan of Washington, DC and Caitlin Finigan of Stowe, VT. She is also survived by her great-grandchildren Emory and Calin Holmes and nephews Alan Mela and Kenneth Mela. Her sister AlMary Mela Bazur predeceased her in 2018.

Family and friends will gather to honor and remember Eleanor on Saturday, Jan. 26, at 10:00 am at New Life Community Church, 221 Baker Ave., Concord.

Donations in her memory may be made to:
Elim Bible Institute and College
7245 College St.
Lima, NY 11485
For International Mission Students, in the name of Eleanor Lawrie