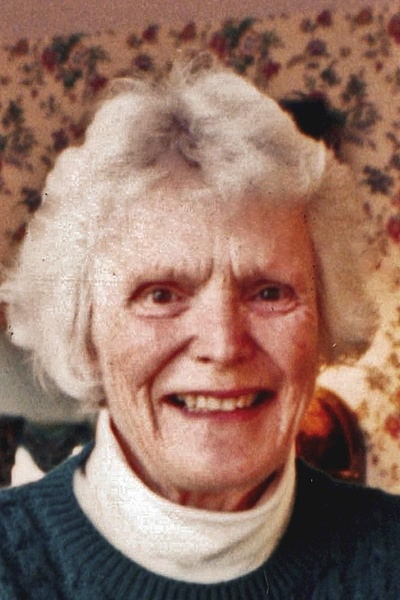 Elinor Bliss Malcom of Concord, Mass passed away at her home Sunday, April 22, 2018 . Growing up in Chestnut Hill, she attended Winsor school and then Westover School from which she graduated. After secondary school, she attended Bradford Junior College. At a party during the Second World War she met and fell in love with Bill Malcom, a Harvard student in the NROTC( Naval Officers Training Corps) program, and he with her. They did not marry until after his deployment overseas and his discharge from the Navy.

She was a gifted athlete excelling in tennis, sailing, and skiing. She also was a master gardener, and with fellow members of the Seeds and Weeds Garden Club won the first place ribbon for their exhibit in the annual Boston Flower and Garden Show. In late winter her pit( a green house sunk into the ground) would explode with blooming camellias and azaleas. Some of these might have made their way to her pit as a result of trades she made with members of The Winter Gardners, another garden club of which she and her mother were members. She earned a degree in landscape design from Radcliffe, and later served for years on the Carlisle Conservation Commission. A faithful attendee of the Friday matinee performances of the Boston Symphony Orchestra for more than fifty years ( She loved the Romantic repertoire), she was also a devotee of opera and Met opera Saturday afternoon broadcasts. Because of her passion in birding she travelled to faraway birding sites in Alaska, the Hudson Bay, Scotland, Costa Rica, and more locally and frequently to Monomoy Island off Cape Cod among other places. Later in life, she became a serious art student, specializing in water color landscapes. She threw herself wholeheartedly into raising her four sons sailing with them, skiing with them, playing tennis with them, and faithfully attending their sporting and other events.

After they grew up, the loving bond with Bill if anything grew stronger as they travelled the world. She watched happily as her grandchildren delighted in the experience of Wings Neck( just like she did when she was young), perhaps remembering the days when she as the skipper with the magic touch with Bill plotting strategy dominated the Buzzards racing scene. Everywhere she went, she made friends. Her penchant for fun, her loyalty, and camaraderie made her the special person we remember so fondly.

She is survived by her four sons, William, David, Stephen and Richard, her two brothers, William and Edward, five grandsons, three granddaughters, and seven great grandchildren.

Family and friends will gather to honor and remember Elinor on Saturday, June 2, 2018 at 2:00 pm in the Trinity Episcopal Church, 81 Elm St., Concord.