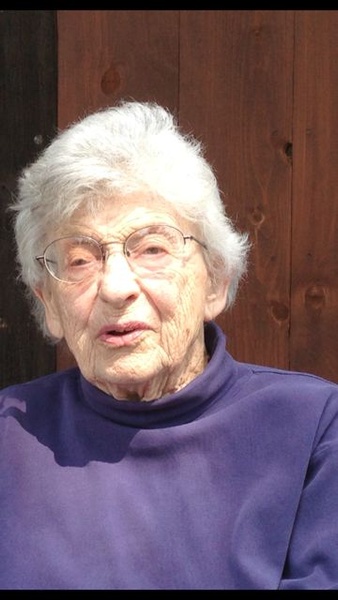 Elizabeth M. Carlhian, long time resident of Concord, MA, passed away peacefully in her home on the banks of the Sudbury River on Sunday November 1, 2015 with daughters in attendance. She was 95.

Her life began in 1920, on a farm overlooking the Hudson River in Garrison NY. Born Elizabeth Meta Ware to Dora (Brunnschweiler) and Edgar Thomas Ware, she was the eldest of three children. Educated during the depression in a school started by her mother in their home, she was later invited to live with her Auntie Susie in Manhattan during the week to complete her high school years at the Chapin School. She was particularly fond of New York City, its theaters and museums, and enjoyed spending time with her half- brother Frank Ware, co-creator of Par Puzzles.

A story she often shared was of her introduction to the burgeoning sport of downhill skiing, which she first tried as a teenager, on an indoor slide covered in Borax at Saks Fifth Avenue! She was hooked from the start, and went on to become an avid skier taking the ski train with her mother to Vermont, buying a cabin on the mountain road in Stowe, and becoming one of the first women on the ski patrol at Mt Mansfield. She passed on her love of skiing and the snow to her children and grandchildren.

Following her graduation from Chapin in 1938, she received a degree from Pine Manor Jr. College in 1940. Her interest in the land, nature, and geology led her to pursue a degree in Landscape Design at Smith College. The program was dissolved, however, and the students were sent to Harvard. In June 1944, she received a degree in Landscape Design from Harvard University. For a year after that she lived in Philadelphia and was employed as a draughtsman by the premier American architect Louis Kahn, at the firm of Stonorov and Kahn.

Returning to Harvard to pursue a graduate degree, she met the handsome young French architectural student, Jean Paul Carlhian. They were married in Garrison, NY in 1948 following her receipt of a Masters degree in Architecture from the Harvard Graduate School of Design. She was in the first class of women ever admitted to HGSD, and would go on to have a successful career in landscape design at a time when most women were content to devote themselves exclusively to domestic life.

After the birth of their second child in 1952, Betty and Jean Paul purchased land in the unique community development known as Conantum, with a Carl Koch starter home. Over the years they made several additions to the house, added landscaping, and raised 5 children. Betty juggled family and career and continued in private practice for over 50 years. Her practice grew steadily from doing residential plans for friends and neighbors in Concord to a full time occupation working with architects, developers and engineers, on plans for institutions and businesses in the region. She designed the landscape for Concord Green Condominiums. Her long list of clients also includes Concord Academy, Wellesley, Dartmouth and Middlebury Colleges: Rhode Island, Greenfield and Cambridge City Hospitals: Brown and Harvard Universities to name a few.

Betty found time to devote to public service in Concord. Passionate about education, she served as a trustee of the Fenn School from 1962-69; also as a corporation member of the Nashoba School for nine years. She was a member of the School Committee for four years, resigning when she was appointed by the Selectmen to serve on the Planning Board of Concord 1969-74: chairing from 1972-73. Over the next five years she served as a member of the Comprehensive Town Plans Committee and subsequently as an associate member of the Historic Districts Commission, and the Growth Policy Development Committee. In 1985 she became a member of the board of Trustees of the Conway School of Landscape Design.

Her skills in long range planning and her interest in open space and thoughtful growth were instrumental in helping to preserve the unique character of Concord for future generations to enjoy. This same commitment has ensured the survival of a100 acre working dairy farm in Johnson VT purchased as a second home during the 70's by her and Jean Paul, and now preserved by a Conservation Easement with the Vermont Land Trust.

Naturally curious about plant science and propagation, she was an active gardener throughout her life. She grew everything from vegetables to feed her family to tropical greenhouse plants. She was a member of several plant societies and clubs. She had a special love for rhododendrons and was very active in the Massachusetts Chapter of American Rhododendron Society, serving on their board and designing their exhibit at the 1990 Massachusetts Horticultural Society Flower Show. There were always interesting cuttings as a centerpiece on her dining room table.

Many in the community knew Betty for her flock of chickens and supply of fresh eggs. She raised laying hens and occasionally meat birds, well into her 80's. She shared her expertise with the Middlesex County 4-H club, and inspired more than one daughter to follow suit.

Her marriage to Jean Paul Carlhian lasted 64 years until his death in 2012. They were pre-deceased by their son Jerome in 1980. They are survived by four daughters; Penny Carlhian, (Charlestown MA), Isabelle Carlhian, (Livingston MT), Judith Larson, (Addison VT), and Sophie Carlhian, (Harvard MA), along with seven grandchildren.

Betty was an extraordinary person, a doer, motivated by broad interests in science, health, history, art and education. She believed in being self sufficient and independently minded. Rare today is such a person so capable in so many practical arts who can design and grow gardens, knit sweaters, sew dresses, make croissants, soap and vinegars; keep bees, give a lecture, conduct a meeting, direct a back hoe, and rescue someone by toboggan. The days never seemed long enough for all her ambitions and interests. Much admired, she will be greatly missed by her family, friends and community.

A memorial is planned for early June in the Concord area. For more information, please email the family at emccelebration@gmail.com.

In lieu of flowers donations may be made to:
The Concord Land Conservation Trust
P.O. Box 141
Concord, MA 01742
www.concordland.org