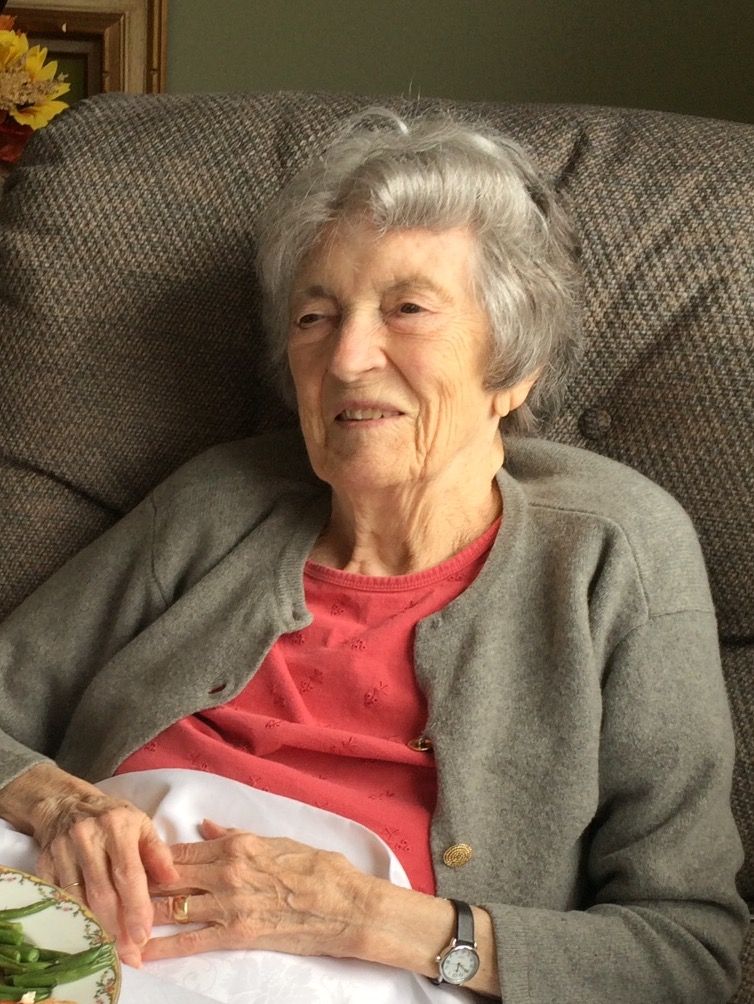 Elizabeth Titus Pattullo, age 95, of Newbury Court in Concord Massachusetts, died peacefully on December 25, 2014. She was the lifelong sweetheart and wife of Edward L. (Pat) Pattullo.

Born in Traverse City, Michigan on June 16, 1919, she was the daughter of Harold and Beth Benedict Titus. Elizabeth graduated from Traverse City High School, and from the University of Michigan, earning an A.B. in Literature in 1939. During the Second World War she worked in New York City as an editor for the World Book Encyclopedia, and met her lifelong friend Sono Rosenberg. Moving to Chicago to work for the University of Chicago Press, she met and fell in love with Pat Pattullo. They went out for breakfast on a date that lasted for 66 years. They were married in Traverse City on September 7, 1948.

Moving to Cambridge in 1957, Elizabeth worked for the Boston Area Faculty Group on Public Issues. The Pattullos moved to Toronto, Ontario in 1963, returning to Winchester Massachusetts in 1965. Elizabeth worked at Harvard University in a variety of roles before being named Dean in the Graduate School of Arts and Sciences.

Dean Pattullo delighted in her title of "Principal Investigator" on the sizable Federal grant to Harvard that financed travel essential to the work of graduate students in a wide range of disciplines. She assured anyone who enquired that the only "investigating" she did was of when, and how the funds allocated to a particular student were expended. A story oft told in later years was of one scholar - destined to eventually hold high office at the University and in government - who was highly resistant to small-minded adherence to the rules governing the use of Fullbrights. Repeated admonitions failed to change the student's behavior until much-needed checks began to get lost in the clutter of the Dean's desk.

In fact, Pattullo greatly liked and admired most of the students with whom she dealt and her feelings were widely reciprocated. She was quick to assist in any way she could when troubles plagued their work or their lives and they were generous in their praise of the very visible human being who held administrative power over their grants.

The Pattullos moved to Newbury Court in Concord in 2006.

Elizabeth was a founding member of the Early Music Group at the Winchester Community Music School, an accomplished player of the alto recorder.

Elizabeth and Pat traveled widely, and visited frequently with their dear friends Violet and Basil Highton, at their home in England, exploring Scotland, Ireland and France together over the years.

Elizabeth was admired for her long distance driving skills (ferrying two small children and a dog from Cambridge to Traverse City and back every summer, before cars were air-conditioned), a voracious reader (especially of Laura Ingalls Wilder, Louisa May Alcott, and France's Hodgson Burnett to young children), her repertoire of union organizing songs, her great delight in making snow days and sick days a joy for her grandsons, and her cut throat game of poker.

Besides her husband Pat, she is survived by her daughter, Betsy Pattullo and her husband Greg Torres of Winchester Massachusetts, her daughter-in-law Susan Pattullo, of New York City, widow of her son Rob Pattullo who died in 2000, grandchildren Jess and Gabe Torres, both of Somerville Massachusetts, and Claire Pattullo of New York City, great grandchildren Jack, Lydia and Quinn Torres, as well as many nieces and nephews.

Gifts in lieu of flowers may be made to:
Winchester Community Music School,
407 Highland Avenue
Winchester MA 01890
www.winchestermusic.org