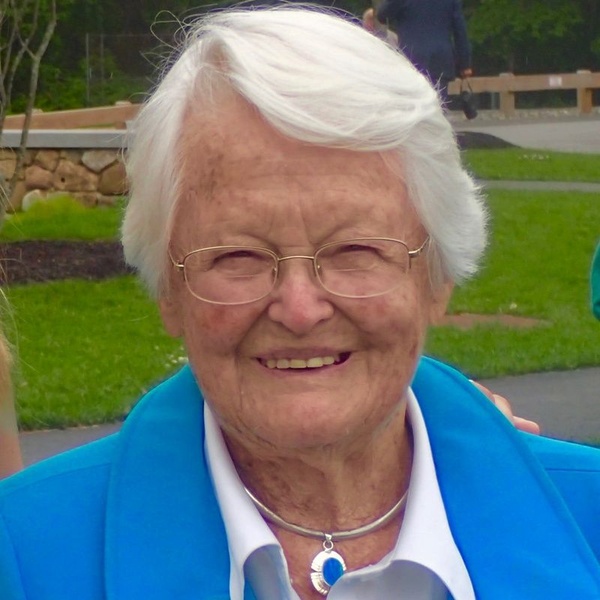 Elizabeth Nye "Betsy" Suter, long-time resident of Concord MA and also of North Chatham MA in the summers and Green Valley AZ in the winters, died Sunday, May 26th, 2019, at Care Dimensions Hospice House in Lincoln MA, of multiple causes. She was 93.

Betsy was born in Saint Paul MN on September 6th, 1925, to the late Carl Merryman Nye and Edith Seabury Nye of Saint Paul, later of North Chatham (from 1947 until their deaths). She is survived by her two younger sisters, both in their nineties, Priscilla Nye "Polly" Dickson of North Chatham (formerly of Weston MA), and Edith Nye "Edie" MacMullen of Amherst MA (formerly of Clinton CT and Weston MA). She was predeceased by her husband of fifty-two years (until his death), Philip Hales "Phil" Suter, in 2003.

Betsy graduated from the Summit School (for girls) in Saint Paul, which she attended for thirteen years, from kindergarten through the 12th grade. She then attended Vassar College for three years before graduating from Barnard College in 1951 with a major in art history. Between Vassar and Barnard, she lived and worked in Cambridge MA where she met her husband then at the Harvard Law School, and she traveled to Europe, sailing in both directions aboard so-called "student ships," luxury liners which had been converted to troop ships during the Second World War, then to ships for young people eager to tour Europe after the War.

Betsy was married on September 1st, 1951 at the Church of the Holy Spirit in South Orleans MA. She and her husband spent the first several years of their marriage in Brattleboro and Dummerston VT, where he began his law career. In 1955 they moved to Concord MA, which was to become their home for the rest of their lives, after his career took him to Boston MA.

The Suter family were members of Trinity Episcopal Church in Concord, where Betsy volunteered as a Sunday School Teacher for about ten years, mostly during the years, mostly in the 1960s, that her children were students there. She and husband Phil joined the TAGs (Trinity Adult Group), and Betsy joined the Altar Guild, of which she was a member for over fifty years, until her death. Betsy volunteered, for many years, to help sort and sell the books donated to the church for its annual "Fayre." Betsy was especially proud, in retrospect, that she let herself be talked in to donating the current church sign outside the Sanctuary in memory of husband Phil, which sign has become in recent years another of the symbols of the parish.

In Green Valley AZ, Betsy was a member and volunteer, in the office and for their annual Tour of Homes fund-raiser, of St. Francis in the Valley Episcopal Church.

Betsy also volunteered at the Alcott Elementary School in Concord from 1967 to 1969, when her children were students there, as a member of the Alcott-Ripley PTA.

The Suters were members of the Concord Country Club and the Chatham Yacht Club, both of which Betsy remained a member until her death, and Betsy was also a long-time member of the Garden Club of Concord, also until her death.

Betsy's first volunteer job was as the first-ever volunteer at Emerson Hospital in Concord, as a member of the Junior League of Boston (Concord area), which had undertaken to provide volunteers among its members, though Emerson had not previously used any volunteers at all. Betsy was also involved in the Junior League's project on the Lyman House (The Vale) of Waltham.

Betsy was an active member, committee chairman and member of the board of the League of Women Voters in Concord, involved in many of their projects. She also served on the board of the Vassar Club of Boston from 1964 to 1970.

She was also persuaded by a neighbor to join a new mental health organization founded by Abigail Adams Eliot of Concord (originally of Boston), later the Walden Guidance Association. From 1963 until 1979, she served as a volunteer, then soon on the board, as secretary, and finally as president. As president, she rebuffed an overture from Emerson Hospital to merge with it. In 1979, she served on the board and as president of the Concord Area Mental Health Center.

Finally, Betsy turned her attention to interests closer to her heart, and volunteered at the Concord Antiquarian Society when the Society (now the Concord Museum) was just starting to use volunteers. Soon, the volunteers formed the Ladies' Committee, of which Betsy was a member, to better organize themselves. She volunteered: in the Museum Shop from when that was in a closet; arranging flowers from when that was done out of another closet; as a part-time docent; and for numerous fund-raising events, for many years.

In Chatham, Betsy was for many years a docent in the Stallknecht Mural Barn at the Atwood Museum, conducting numerous tours, though rarely mentioning during them that it was her mother who played an instrumental role, commemorated by a plaque and portrait of her mother at the now less often used entrance to the Mural Barn, in securing the murals and barn for the Museum.

As extensive as these various volunteer jobs and board positions were, however, Betsy was most proud of her job of many years for which she was paid, from 1968, as a part-time research assistant to the late Margaret Henderson Floyd, architectural historian, engaged primarily on an architectural survey of Weston MA when Mrs. Floyd was Chairman of the Weston Historical Commission, and on research for a book on John Hubbard Sturgis, prominent 19th century Boston architect, which resulted in an unpublished manuscript by Mrs. Floyd. Betsy was an occasional lecturer on architectural history, her greatest passion which began to eclipse her interest in art history even during her college years.

Betsy was proud to be descended from the Nyes of the Benjamin Nye Homestead in East Sandwich MA, John and Priscilla Alden of the Mayflower and Plymouth Colony fame, and Samuel Seabury, the first Episcopal bishop of the new United States, who has recently regained some renown by appearing, briefly, in the modern musical Hamilton. Betsy's interest in her heritage eventually led her to research it by traipsing through graveyards and Town Halls, husband Phil in tow, in search of ancestors, preparatory to joining the National Society of the Colonial Dames of America in Massachusetts, soon serving on its board. Betsy was also a member of the Chilton Club of Boston.

Betsy enjoyed sailing with various family members in Chatham, and cruising with a group of Marshall Catboat owners from Chatham with husband Phil aboard their 18' Marshall Catboat, which they named "Saunterer" after a quotation from Henry David Thoreau about the value of sauntering, an apt description of their cruising style, and which is still owned by the family.

Betsy also enjoyed skiing and especially tennis, which she played weekly, year-round, well into her eighties. She traveled extensively throughout her life, especially to Europe and the Caribbean, but also to Asia, Africa, Central America, Australia, New Zealand, Hawaii, Alaska and throughout North America.

A lover of animals, miniatures, games, children's toys, books, traditional furniture and furnishings, a good time, humor, good grammar, good causes and chocolate, among many other things, Betsy was well-liked and attracted many friends throughout her life. Her own assessment of her long life she summed up, in a typically self-deprecating manner, with a quote which she attributed to Garrison Keillor, a fellow St. Paul Minnesotan: "It's been an ordinary life. And it's good enough, it's good enough."

In lieu of flowers, contributions in Betsy's name may be made to the Concord Free Public Library Corporation at cfplcorp.org.

A memorial service will be held at Trinity Episcopal Church, 81 Elm Street, Concord MA at 2pm on Friday, September 27th, 2019. Burial at Sleepy Hollow Cemetery in Concord was private.