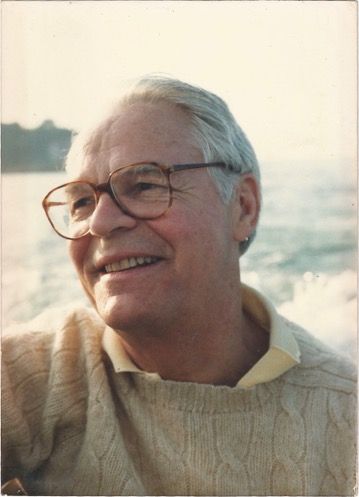 Elliot attended Eaglebrook School in Deerfield, MA, '43, and Phillips Academy, Andover, MA, '46. Following graduation from PA, and two days before the G.I. Bill of Rights expired, he enlisted in the Army. At age 17, he had to have his father's permission. After the Army he enrolled in Williams College, Williamstown, MA, and received a BA in English in 1952. He was active in school activities and took on several leadership roles, among them Class President and President of Delta Kappa Epsilon. He had a lifelong love of sports and played hockey, football, and lacrosse in school and college. He extended his love of football by playing on the regimental football team in Germany and Austria while in the Army. He was an avid supporter of the New England Patriots.

Following graduation from Williams, he returned to Eaglebrook School to teach English and history and to serve as a dormitory master and football and hockey coach. In his two years there he said he received the biggest salary hike of his career — 50%: from $1200 to $1800 a year! After two years, he switched to the corporate world and joined General Electric. In 1962 he left GE and joined Harbridge House, Inc., a management consulting and development firm in Boston. During his 31 years at Harbridge House, he was an adviser to leading companies and educator in corporate training and development programs. Elliot taught executive programs for companies such as Volkswagen, GE, John Deere, and Raytheon, where he led a team of consultants annually, teaching the Raytheon Advanced Management Program (AMP).

Elliot traveled all over the world. He had a gift for developing comprehensive, deep discussions on management and leadership issues. He liked to say he tried to put participants on the "edge of the knife." Colleagues over the years benefited from his humor, sense of respect, and always kind words. More importantly, as a leader, it was in his style—professional presentation and connection with the audience—that he achieved his success. And he had an uncanny ability to learn the names of all the participants in a seminar on the first day. In 1979, while at Harbridge House, he attended the MIT Sloan School Program for Senior Executives. He retired as Principal at Harbridge House in 1993.

While he was at GE he moved to Marblehead and settled there with his family as the kids grew up. In the early '70s, he went through a divorce and moved to Boston. One evening, walking home from Harbridge House, he ran into friends and met Ann, who was living on Beacon Hill and freelancing as a graphic designer. They began dating and married in 1975. They lived a few years in Back Bay and then moved to Weston, MA. Despite a lot of business travel, Elliot always found time to travel for pleasure. He and Ann loved to drive to the Berkshires, bikes in tow, and attend Tanglewood concerts and theatre in the summer. They biked the backroads of France and England, enjoyed the sand and sea of the Caribbean waters of Jamaica, and took cruises to Europe and the Middle East.

Elliot retired in 1993 and they moved to Lincoln, MA. With free time on his hands, he volunteered for the Town of Lincoln, working on the Personnel Board and with the Town Moderator. They became members of St. Anne's in-the-Fields Episcopal Church, where Elliot served on the Vestry and several committees and commissions, among them Outreach, which opened the door to working with Concord Prison Outreach. There he conducted a series of programs: Emotional Awareness & Healing, Alternatives to Violence, and Anger Management. It was challenging, and he was devoted to his work with the prisoners. He volunteered to help serve meals at the Pine Street Inn and worked in the After-School program with the children at St. Stephen's Episcopal Church in the South End.

In later years, when his memory began to fail, Ann was at his side helping him along the way as their lives started down a new and unknown path. In 2014 they moved from Lincoln to Newbury Court in Concord.

Elliot was kind and thoughtful and compassionate and funny and always the consummate gentleman. He had a strong faith that sustained him over the years. He loved jazz and classical music, and he and Ann were longtime subscribers to the Boston Symphony.

Elliot had a full life and he loved his kids, he loved his family, he made lasting friendships, and he loved learning and teaching. He worked hard but always found time to relax and have fun. As one nephew put it: ". . . just to see his smile, hear him laugh, and marvel at his wisdom and seemingly effortless capacity to kid around, reminds us that life is rich and to be savored. What a big hole he has left behind."

Donations in his memory may be made to:
Rivercrest Long-Term Care Facility
80 Deaconess Road
Concord, MA 01742
Please write "donation" in the memo line
https://www.nedeaconess.org/giving-payment/donation.htm