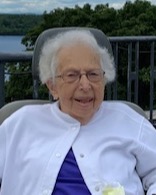 Esther Althea Kaplan Braun was born on March 4, 1926, to Annie Sabin Levenson and Jacob Joseph Kaplan of Dorchester, MA. She was their fourth child and only daughter. Her original middle name was “Alma,” which she did not like and later changed to Althea in honor of her dear maternal grandmother, Esther Alta.
Her family moved to Jamaica Plain in 1931. It was a busy household: Her father, a polymath and wellknown Boston attorney, and her musically gifted mother were both active in numerous civic and philanthropic activities and her mother often hosted events at their home. Esther attended the Seeger School in Jamaica Plan for grades 1-3, and the Agassiz School for grades 4-6, which she recalled as “uninspiring.” By her own recollection, she was fearless on a sled in the winter and mostly-but not always-well behaved at home and in school. Her brothers were 8-13 years older, so for many years she was the only child at home full time. Her parents tried unsuccessfully to interest her in the Jewish faith and its rituals (about which they were in fact becoming more casual themselves), but she did love the family’s Seder and holiday dinners for the food and gatherings with members of her parents’ large clans, many of whom she loved dearly. To her final days, she loved large family dinner gatherings, a love she passed on to new generations.
Her parents bought a large plot of old, overgrown farmland in Scituate, MA, in 1924. Its 18th-century farmhouse and its massive barn became their summer home. She did not know many children in Scituate, however, and so spent her childhood summers until 1936 essentially “free range,” playing in the woods and fields, and, in her smaller years, in a large playhouse her father built for her, complete with interior lighting, miniature indoor plumbing, and room for her to crawl inside. Later, she went to overnight summer camps.
She and her husband, Mort, eventually built a house on part of the Scituate family lands. She then could spend at least part of every summer there with her own children, who thereby got to know her parents and their Kaplan aunts and uncles and cousins who also stayed or visited there most summers. There was always a big family cookout, with lobster, clams, and corn cooked in large pots out in the yard.
She started at the elite, grueling Girl’s Latin School in the 7th grade, commuting by bus and streetcar by herself. Not only was the workload severe, her bookbag was backbreaking. Whether this was the start of the back problems she suffered later in life, we will never know. Though she had friends there, the workload and the commute were brutal and, after four years, she transferred to Thayer Academy in Braintree. Here she discovered her love of math – and later, organic chemistry, too – and her ability to thrive academically when taught in a positive – not punitive – educational environment!
She was 13 in 1939 when Germany invaded Poland, where many relatives on both sides of her family still lived. Letters stopped coming, the news on the radio and her own childhood experiences with antisemitism left her with a sense of foreboding, and her youngest brother went into the Army. She involved herself in volunteer work supporting the war effort and was forever after proud that her father invented the microfilm technology called V-mail (based on his patent for storing bank checks on microfilm), that allowed US troops and their families to send mail back and forth in large volume throughout the war. In 1942 they also loaned their house to the Army for the residence of an officer and his family, while she and her parents lived in a hotel for the year; and in 1943 she spent her summer tending a field of potatoes for the army on the family’s Scituate lands, another of her father’s ideas to contribute further to the war effort.

She graduated Wellesley in 1947. That school year she also met a young naval officer and Harvard graduate, Mort Braun – on a blind double date arranged by mutual acquaintances, but not as each other’s dates! They soon figured out who they wanted to be dating, and things progressed from there. They married in June, 1947, and she continued to work in a blood chemistry lab until her pregnancy with her first child put an end to that. However, it did not end before her boss published a professional article on her work taking full credit for it himself, including for developing an improved method for measuring fibrin in blood, without a single mention of her name or position in the effort. She never forgave him or lost her determination to never again tolerate such male entitlement.

She became a full-time at-home mother with the birth of her first child, Peter, in 1949, then David in 1950, while Mort started his career in housing and city planning. They moved first to Boston, then to Brookline, and then into a house that Mort designed for them in Newton. Daughter Charlotte joined the family in 1953 and son Alan in 1957. Though they formed many close friendships in Newton, she and Mort wanted to live in a more rural area and in 1959 bought property in Brown’s Wood, Lincoln, MA. Mort again designed the house, and they moved there in 1960. The house included an attached greenhouse for her, in which she started each season’s garden crops and raised diverse flowering plants including an eventually huge Bird of Paradise, its occasional spectacular blooms a cause for household celebration.

In 1961, a ruptured disk in her back floored her. She refused surgery and, with everyone pitching in, she was able to return to full movement after a few months of careful rest. She suffered from back problems the rest of her life, but that did not stop her from becoming an avid organic gardener after she read Rachel Carson’s Silent Spring. Her steadily expanding vegetable garden, and her consequently intensifying battle with the local deer and woodchucks became a constant topic of discussion and admiration thereafter. Her desire to have bird feeders up where she could watch them also drew her into battle with the local squirrels – a confrontation that she also continued for the rest of her life.

This same determination carried her into her next phase of life, as her children all settled into full-time schooling. She and Mort became part of a small group that launched the Valley Pond Association and guided the construction of Valley Pond, Lincoln and Weston, a summer swimming and boating haven for local families ever since. In the early 1960s, Northeastern University began an experimental six-year, part-time program for “mature” adults to become teachers, into which she enrolled in 1963. One of the program’s components was a curriculum in what was called the “New Math,” in which she excelled. She graduated in 1969 and had the good fortune to be hired by the Lincoln Public Schools, where she had done some student teaching. This was a progressive school system, open to new approaches: She and another new teacher, Sue Reece, together taught a double-sized group of fourth and fifth graders in two connected classrooms, known fondly thereafter to generations of students as “Braun-Reece.” They divided much of the teaching topically rather than by room. Her specialties were science and math, Sue’s were reading and language arts. She taught there with Sue until her retirement. Long before she retired, though, she started teaching a unit on the native peoples and prehistory of the northeast and became aware of how scant and bigoted the literature was on the topic. This resulted in a joint effort with her second son, a professional archaeologist, leading to their publishing a book, The First Peoples of the Northeast, in 1994. It has sold out multiple printings.

Her life with Mort through the 1960s–1990s included dogs and cats, joyfully hosting grandchildren for summer vacations, numerous trips to England and Scandinavia, trips to the Caribbean (the latter sometimes with their young children), and, in later years, travel around the US to see their increasingly widely scattered children and grandchildren. It also included frequent trips with friends to see Broadway shows in NYC, raucous holiday parties with friends, and family visits with Mort’s NYC cousins including at their summer cottage on the Jersey Shore. She also became proficient with software for recording family trees and, with Mort, prepared detailed trees for both of their vast families.

In 2001, she and Mort moved into an independent-living townhouse in Carleton-Willard Village in Bedford, MA, after Mort was diagnosed with Alzheimer’s. Mort died unexpectedly barely 6 months after they moved in, but not before he had helped her get her new garden plots going and her new bird feeders set up. She continued battling with squirrels over her bird feeders, and became a well-known figure at the Village, sitting on many committees, advocating for more sustainable landscape management practices including composting, and writing frequently for The Villager, the community’s newsletter. She helped organize the village library catalog and helped organize the still-ongoing growing of organic cherry tomatoes in quantity by village residents to add to the salad bar in the main dining room. She also stayed in touch with a vast network of family and friends and enjoyed frequent visits with her growing family of descendants – except during the pandemic, which frustrated her greatly. She began writing her memoirs, which she completed unfortunately only up through the 1970s before her death.

There will be a public memorial gathering on Saturday, December 17, 2022 at 2:00 pm at the Pierce House, 17 Weston Road, Lincoln. Carleton-Willard Village will host its own private memorial gathering. Interment in the Lincoln Cemetery will be private.