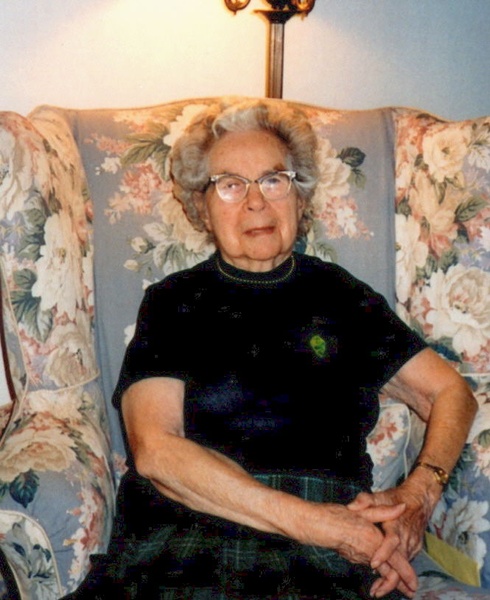 Frances Baxter Pilsbury died on April 11 at her residence in Concord , MA , at the age of 108. The daughter of Lincoln and Effie Frances Monroe Baxter, she grew up at the Baxter family residence on Foster Street in Brighton , MA .

Although accepted for admission to MIT, she attended Simmons College and graduated in 1923 with a degree in home economics. On February 21, 1925, she married Elmer Knapp Pilsbury of Somerville , MA . Together they raised two children, Robert and Sally. They lived first on Wyoming Road in Newton, and for the succeeding fifty years on Charlesden Park in Newtonville.

The family spent summers in Saco, Maine, first at Maine Stay, the Pilsbury family cottage, and later at their own Bayview cottage in Saco . Frances Pilsbury was a devoted and talented homemaker. She was active with both Girl Scouts and Boy Scouts, and a volunteer worker at the Veteran’s Administration Hospital in Jamaica Plain , MA. An accomplished weaver, she served for a number of years as Dean of the Weaver’s Guild of Boston, the oldest such guild in the United States .

She was a dedicated refinisher of furniture with an able hand and a keen eye for what was worth refinishing. In the 1960s, she began to compile family records into carefully researched and meticulously detailed handwritten genealogies of her own and her husband’s families. These serve to this day as an invaluable resource to her many descendants and other relatives.

GIFTS IN HER NAME MAY BE MADE TO:
Weavers' Guild of Boston
P.O. Box 366
Andover, MA 01810
www.weaversguildofboston.org