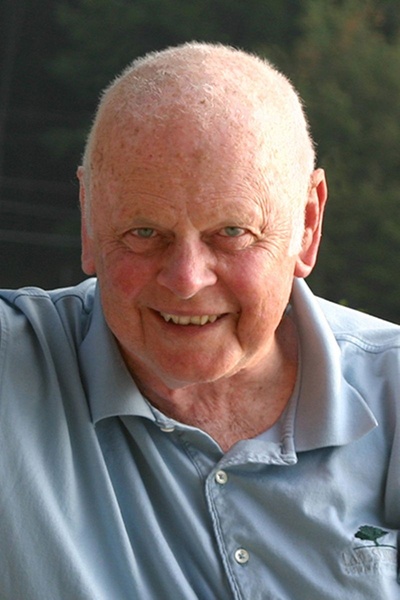 Frederick Andrew Downey, Jr., formerly of New London, NH, Shaker Heights, OH and Easton, CT, died peacefully on August 25, 2019.
Frederick was predeceased by his wife of 63 years, Phebe Hofford Downey, and his brother John. He is survived by their four daughters, Ann Little of Boxborough, MA, Margaret Hardy of Hollis, NH, Katherine Berges of Branford, CT, and Martha Lemp of Arlington, MA, as well as by twelve grandchildren and four great grandchildren. Fred was immeasurably proud of his extended and closely connected family and took great joy in being around them, as they did in being with him.

Fred was born in Stratford, CT to Frederick, Sr. and Jeanette Clark Downey. He was a talented athlete who starred on his high school baseball and basketball teams and played semi-professional basketball. He was a golf club champion at multiple clubs and even shot his age at the age of 70. Fred attended Booth and Bayliss Business School and earned his CPA, the youngest person in the state of Connecticut to do so at the time. He worked at Warner Brothers (later Warnaco) in Bridgeport, CT for 25 years, eventually becoming CFO and Executive Vice President. For the next 11 years, he served as the Chief Financial Officer and Executive Vice President at Parker Hannifin in Cleveland, OH. Upon retiring from Parker Hannifin, he and Phebe returned to New England to be closer to family. In retirement, Fred started a consulting firm to guide companies in their strategic planning process and served on the boards of several companies as well as non-profits.

In addition to his passion for sports and business, Fred was committed to giving back to the community. He was particularly devoted to providing opportunities to economically disadvantaged youth, having spent countless hours as a child at the Sterling House, a community center in Stratford, CT. He served as the President of the Archbishop Shehan Center in Bridgeport, CT, and he and Phebe devoted both time and resources to many other causes, including BRCA research, councils on aging, and local churches. Fred always relished the chance to engage with and mentor youth, whether his grandchildren or young people in his community.

Fred will be remembered by family, friends, and colleagues for his keen, probing, analytical mind. Everyone appreciated his gentle, self-deprecating humor and his unwavering integrity and generosity. He was an old-school, "self-made man" - incredibly determined, optimistic and resilient, who always saw challenges as opportunities, even until his final days. He was an inspiration and role model to those who were fortunate enough to know him. Fred was much loved and will be greatly missed by family and friends.

Family and friends will gather to honor and remember Fred at his Memorial Mass, which will be held on Friday, September 13, 2019, at 10:30 am in St. James Catholic Church, 2110 Main St., Stratford, CT, followed by a luncheon.