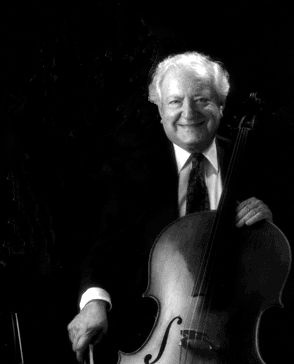 "Life without music would be no life at all" could be a quote attributed to George Neikrug a world famous cellist and teacher of cello often mentioned in the same dialogue with Pablo Cassels, Yo-Yo Ma, Pierre Fournier and Emanuel Feruerman.

With heavy hearts we share the loss of George Neikrug who passed away yesterday at the age of 100. George Neikrug was teaching at Boston University where he had been professor of cello for the past thirty years. The latest CD featuring Mr. Neikrug is "Great Moments in Cello Playing," selected from eighty years of treasured recordings, recently released by Cello Classics. He gave master classes in Germany, Italy, Austria, Australia, Iceland, Hawaii, Canada, and extensively in the United States. He played solos with major symphonies all over the world. In addition to the cello repertoire, his virtuosity enabled him to perform some of the most technically demanding works for the violin on the cello. His many performances of the Paganini Violin Concerto in D Major with the Sauret cadenza have amazed audiences and colleagues as well. Condolences have been received from Boston University, The Boston Symphony Orchestra and Boston Pops and his former student and friend Yo Yo Ma.

Born in New York, George Neikrug was a pupil of the legendary Emanuel Feuermann and was one of the only remaining students who was still concertizing. In 1943, he met the well-known pedagogue D.C. Dounis, whose revolutionary approach to the problems of string playing and teaching influenced him to completely revamp his playing and create the unique style he has retained to this day. This association lasted for a period of fifteen years, and Neikrug felt such a debt to Dounis for all the knowledge and skills he had learned that he resolved to devote his life to teaching at schools, such as Boston University, and giving master classes all over the world.

Since Neikrug's New York debut in 1947, he held principal positions with the Baltimore, Pittsburgh and Los Angeles Philharmonic Orchestras. He was also principal cellist of the Paramount Pictures Recording Orchestra and the Columbia Recording Orchestra, which recorded the historic series of performances by Igor Stravinsky and Bruno Walter, who called Neikrug a "genuine musician and a real virtuoso of the cello."
In 1960, Leopold Stokowski asked Neikrug to perform Bloch's Schelomo with him and the NBC Symphony at Carnegie Hall, with a recording for United Artists to follow. After this performance, Stokowski sent him an autographed photo with the inscription "for George Neikrug's Schelomo — unforgettable." In 1979, Neikrug performed all six Bach solo suites in one concert at Lincoln Center. In an enthusiastic review of this concert, John Rockwell of The New York Times concluded, "there was a beauty that was almost painful. We wish Mr. Neikrug would play all the violin suites for us."

Mr. Neikrug appeared as a soloist with such conductors as Leonard Bernstein, Wolfgang Sawallisch, Bruno Walter, Leopold Stokowski and Yehudi Menuhin, who stated, "I was most impressed with his profound and accurate understanding of his instrument, as well as string playing in general. He is a first-rate musician, and I cannot recommend him too highly." His recording of Bloch's "Schelomo" with Leopold Stokowski and the Symphony of the Air was recently re-released on the EMI label. In addition, Sony has recently released his recording of a duet by Mozart for cello, baritone and orchestra with George London, baritone, and the Columbia Symphony, conducted by Bruno Walter.
In 1962, Mr. Neikrug accepted a teaching position at the Hochschüle in Frankfurt, Germany, as a Fulbright Professor sponsored by Ernst Toch and Bruno Walter. He has held teaching positions at the Detmold Hochschule in Germany, Oberlin College, and the University of Texas at Austin before joining the faculty at Boston University School for the Arts in 1971. He was selected to receive the 1995 "Artist Teacher Award" from the American String Teachers Association. In 1996, he was invited by Janos Starker and the University of Indiana to receive the "Chevalier du Violoncelle" award for outstanding lifetime achievement on the cello. Many of his students are in major symphony orchestras all over the world, including some in principal positions and teaching at major universities.

He is survived by his wife Virginia and sons Barry and Marc as well as by his many students and friends who will forever remember his brilliant technique , love of music and teaching and mastery of his instrument.

Any tributes or remembrances can be sent to George's Attorney:
Brian Cook at: brcook.law@gmail.com to be complied into a book for his family