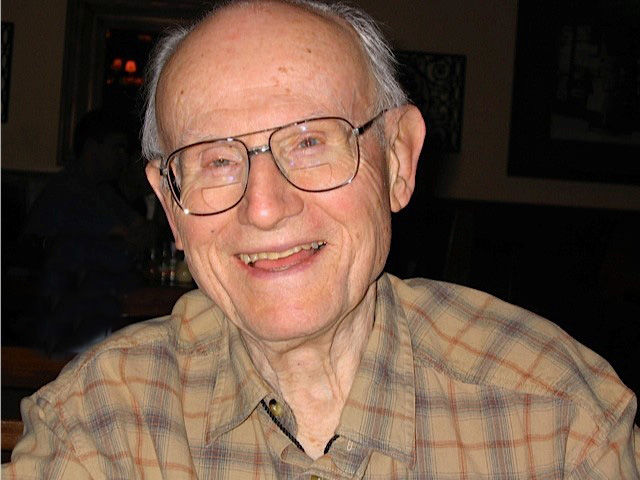 George A. Warren, native of Detroit, Michigan, member of the Michigan State Bar for 75 years, former Chief of Classification for the City of Detroit, died September 20, 2014, age 100 at his home in Acton. Husband of the late Marilyn Ruth (Cohn) Warren, he was the son of the late Oscar and Rebecca Warren, father of Edward Warren of Nashua, NH and Martha Warren and husband Peter Clark of Boxboro. Loving grandfather of David J. Clark of Boxboro and the late Michael N. Clark.

Born December 2, 1913, George grew up in Detroit in an age where it was thriving. He survived the Spanish Flu epidemic of 1918, collected peach pits for the arsenic they contained for the World War I war effort, and began listening to recordings of opera at the age of 7. In his autobiography he writes, "My childhood was very happy. I was king of the hill for nearly 7 years until my sister Geraldine was born. I had to learn to share. I tried." He started driving cars a little before he had a license – at age 10 – when he told the little girl next door "I'm going to move Pop's car into the garage." It was a Ford Model A, and it survived, but without its side mirror. The garage was not as lucky. So began a lifelong love of cars.

George had vivid memories of his family's struggles during the Depression, when his father lost his business and he was forced to drop out of school for a while and help support the family. After graduation from Wayne State University Law School in 1939, he passed the bar exam and worked briefly a lawyer, but in 1940 he took the Civil Service exam and began a 38 year career in Personnel with the City of Detroit. He worked for and with 7 mayors: Ed Jeffries, Gene VanAntwerp, Al Cobo, Louis Miriani, Jerry Cavanagh, Roman Gribbs and Coleman Young. He was also elected to four six year terms as a policy making trustee of the General Retirement System. He controlled a dozen Charter amendments and helped set the framework of the Retirement System, which still exists despite the recent bankruptcy of the City of Detroit.

When he was 12 years old, George began collecting 78 rpm records which he would play on the family's 1918 Brooks Automatic Victrola. Over the years he collected over 1000 recordings, many of them rare, of opera and classical symphonic music. He refused to move from his home in Detroit after retirement until daughter Martha agreed to adopt this large collection. His love of opera continued throughout his life, and he tried to pass it down to his children. It didn't take with Ed, but Martha became a professional opera singer, and George was her biggest and proudest fan.

A confirmed bachelor until he was 41 years old, he met Ruth Cohn after receiving her number from a friend of a friend of his mother. He didn't expect much, but called her on June 1, 1955. They spoke for two hours, and he famously hung up the phone and said, "son of a b***h, George, you're hooked!!" They were engaged in August, and married November 20, 1955 at the Belmont Hotel in downtown Detroit. They honeymooned in Florida, and completed their family with Ed and Martha. They celebrated over 53 years of marriage before Ruth passed away in 2009. For the last 20 years, George loved living in Massachusetts, where he and Ruth were "hands on" grandparents to their twin grandsons, David and Michael Clark.

Memorial Observance (shiva) will be at his home at:
Benchmark Senior Living at Robbins Brook
10 Devon Drive, Acton, MA on Tuesday, September 23rd from 2-5pm and 7-9pm.
In lieu of flowers, contributions in his memory may be made to the:
Michael N. Clark '15 Memorial Scholarship at Ithaca College
953 Danby Road
Ithaca, NY 14850