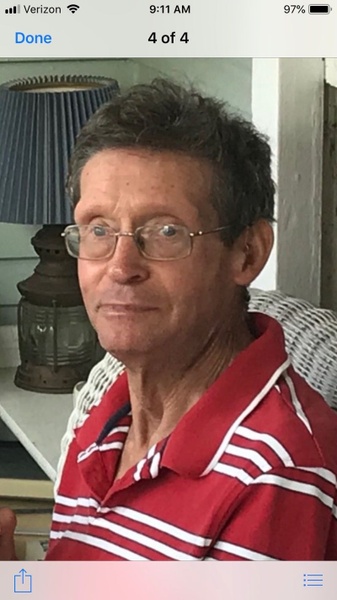 Granville Curtis Garth, also known as G-man, formerly of Concord, Mass., died May 5, 2019 with his sister at his side. Granville was the son of William W. Garth, Jr. and Sarah Curtis Garth.

He graduated from Riverview Academy in Sandwich, Mass., and received a certificate in electricity from Franklin Institute in Boston. He was placed at the Whistler Company in Littleton, Mass., by Mass Rehab and for many years worked assembling electronic circuit boards for radar detectors. An avid music lover, Granville was a gentle soul, who loved his hometown of Concord and was an enthusiastic volunteer at the annual book sales of the Concord Free Public Library. He was also an active participant in the social programs organized by the Alternative Leisure Company.

Granville is survived by his companion of more than 20 years, Lynn Marie Hart; his sister, Susan Garth Stott, of Andover, Mass.; his brother, William W. Garth (and his wife, Suzanne), of St. Petersburg, Fla.; Lynn's brother Jeffrey Hart (and his wife Jennifer); his nieces Sandra Comstock, Anne Thiam (and her husband, Ahmadou Thiam), and Sarah K. Garth; his nephew, Jesse Garth; Lynn's nieces, Jillian, Elizabeth, and Susan Hart; and his brothers-in-law Sandy Stott (and his wife Lucille) and Peter Stott (and his wife Louise); as well as two great nieces and three great nephews.

A celebration of Granville's life will be held on June 19 at 1 PM in the Elizabeth B. Hall Chapel at Concord Academy following a private interment in Sleepy Hollow Cemetery.

In lieu of flowers, contributions in Granville's name may be made to:
Concord Free Public Library
129 Main Street
Concord, MA 01742
https://concordlibrary.org