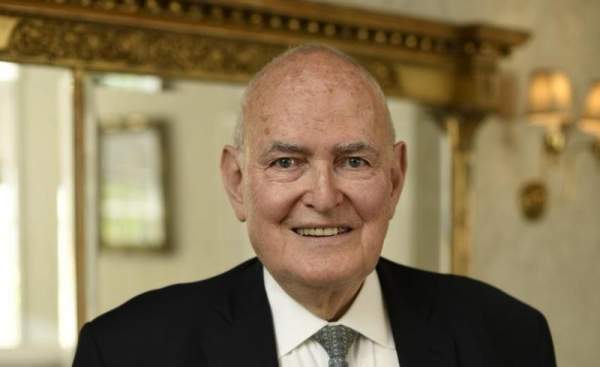 Guido Goldman, PhD, died on November 30, 2020 at his home in Concord MA after a long illness. He was born in Zurich, Switzerland, in 1937 to the late Alice, née Gottschalk, and Nahum Goldman, cofounder and President of the Word Jewish Congress. In 1940 the family fled to the US. Goldman grew up in New York in a household where important personalities including Bernard Baruch and Konrad Adenauer were frequent guests. He graduated from Harvard College and wrote his dissertation under the supervision of Henry Kissinger, with whom he developed a close, lifelong friendship.

Goldman assisted Kissinger in creating Harvard's German Research Program and together with Stanley Hoffmann founded its Center for European Studies in 1969. Later renamed Minda de Gunzburg Center for European Studies, it became the leading institution of its kind in the US under his directorship. Using his extensive network of contacts to European and notably German intellectuals, politicians, and businessmen, Goldman convinced the German government to make a large donation as a thank you gift for the Marshall Plan. At Harvard's Commencement of 1972 Chancellor Willy Brandt announced the creation of the German Marshall Fund of the US, and Goldman became its Founding President. To this day the foundation is devoted to central issues of transatlantic relations. He continued to play a crucial role in relations with Europe. Among the initiatives and institutions he helped to launch are the John F. Kennedy Memorial Fellowships and the John McCloy Program for graduate students, both at Harvard; the American Institute for Contemporary Studies in Washington; and the Warburg Chapters of the American Council on Germany.

Many of Goldman's energies were devoted to philanthropic endeavors. He served on the Board and as Vice Chair of the Alvin Ailey American Dance Theater and helped to establish a program for children to combat obesity. He became the founding Chair of the American Foundation for Textile Art. An avid collector, he assembled the world's best collection of ikat textiles from Central Asia, which he later donated to museums. His efforts led to a revival of this lost nineteenth century art in Uzbekistan, which thanked him by making him a member of its Academy of Sciences.

In the business world Goldman was Co-Founder and Chairman of the First Spring Corporation, the family office of Minda de Gunzburg and her two sons Jean and Charles de Gunzburg, where he served as their trusted advisor for many years. He was a member of the US advisory board of Christie's and was a trusted adviser and trustee for other families who sought his world view and wisdom.

Goldman's relentless efforts to promote international understanding, to fight racial prejudice, to support the arts, and to help the needy have been widely recognized. Harvard's Graduate School of Arts and Sciences accorded him the Centennial Medal. The German Government not only awarded the Commander's Cross of the Order of Merit to him but also commissioned a biography in German, Amerikas Mr. Germany (Herder Verlag), which will be published in the US in early 2021 (by Berghahn Books) under the title Guido Goldman: Transatlantic Bridge Builder. Throughout his life, Goldman's warm and generous personality and ability to connect with people in all walks of life earned him a worldwide circle of friends who share his aspirations and who will sorely miss him.


A private graveside service for Guido was held on Friday, December 4, 2020 at Sleepy Hollow Cemetery. Please activate the link provided to view the service.


The Center for European Studies (CES) plans to celebrate Guido's life with a community event next Fall.

May we suggest that, in lieu of flowers, you consider a donation to a fund that honors Guido at the Harvard Center for European Studies. You may do so by contacting Elizabeth Johnson at ejohnson@fas.harvard.edu.