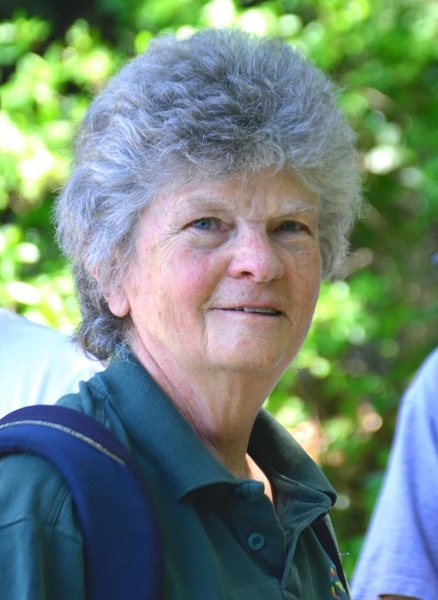 Harriet Meredith Backus Todd died peacefully at her home in Lincoln, Massachusetts, on Monday, August 27, 2018, with family at her bedside including her husband of 51 years, Conrad "Rob" Todd.

Harriet was born on September 2, 1942, in New York City, to Dana and Louise Backus. She was the fourth of five sisters. From her parents, she received a love for reading, horses, and the outdoors. As a girl, she enjoyed family trips of skiing and hiking, and learned to ride horses—all of which she continued to do into her seventies. A precocious student, Harriet attended the Brearley School in New York City, and later Radcliffe College, where she earned a bachelor's degree in history in 1964.

Upon graduating college, Harriet remained in the Boston area. She went to work in the insurance industry and was one of a few women to do professional computer programming in the industry in the early 1970s. As a young adult, she continued her childhood appreciation of the outdoors and regularly hiked in the White and Green Mountains of New England. This included the summiting of all of New Hampshire's four-thousand-footers with her husband and in 1997 joining a group trek in Nepal that climbed to the height of the base camp of Mt. Everest.

It was through her work that she met her husband Rob. During their hikes together, they began a lifelong tradition of sharing a kiss at the top of every mountain they climbed. The two were married at Harriet's family home on Long Island in 1967. After living in Cambridge, Massachusetts, for some years, the couple settled in Lincoln, Rob's hometown, with their dog Sesame. There, Harriet gave birth to her two sons James and Nicholas.

As a mother, Harriet passed on her love for reading, horses, and the outdoors to her sons (although they didn't end up taking to horseback riding). She often organized family hiking, canoeing, and skiing trips. She pushed the family to get moving in the morning, pressing everyone to reach a lookout, summit, or creek before taking a break for lunch. When skiing, she shunned the warmth of the lodge even in freezing conditions and always aimed to get the "last run" down the mountain before the ski lifts closed. She was one of the few moms who operated a chainsaw, enjoyed clearing brush, and joined in on family games of touch football or wiffleball.

While raising her children as a homemaker, Harriet was active in serving the wider community through organizations such as the League of Women Voters, the Museum of the Life and Science, and Radcliffe College's board of trustees. She gave generously to a number of educational and environmental nonprofits. Her civic engagement culminated in being elected to two terms as selectman for the town of Lincoln from 1989 to 1994. During that time she provided a steady hand as the board dealt with many issues of the day including town finances, land use, housing, traffic, and a myriad of other matters.

Always curious, Harriet learned accounting after her children left home and then worked as a bookkeeper for a political campaign, a start-up company, and a nonprofit organization. She was constantly reading and had a great memory for famous dates in history (she was once quizzed about the Peace of Westphalia and immediately produced the date of the treaties—1648!). She and Rob traveled widely throughout their marriage, often opting for trips that had some combination of physical activity, service, and learning, such as volunteering for twelve different Earthwatch projects that involved archeological or environmental field work.

Known among her friends and family for being tough—she insisted on not heating the house each fall until the end of October—Harriet was also a steady loving presence in the lives of family and friends. She could be counted on to support her children, friends, and extended family at sports games, graduations, weddings, family weekends, and memorials. She baked cookies for her sons on their birthdays well into their adulthoods. As a "Grammy," she was involved in the lives of grandchildren, visiting regularly and sharing vacations together. At a celebration of their 50th wedding anniversary last summer, Harriet and Rob were surrounded by friends and family, including many of the people who attended their wedding.

Harriet was given the extraordinary blessing of living 75 years without major illness or injury. When she suffered a significant stroke in March of this year, many people were saddened to see such an active and intelligent woman so suddenly debilitated. However, in the months of surgery and rehabilitation that followed, some of Harriet's character shown through. She was tenacious in her efforts at rehabilitation, seeking to get out of bed, practice exercises, read, and converse—sometimes before her medical providers were prepared for her to do so! She surprised some of her caregivers—but not her family—with wry quips about the equipment used to treat her and the amount of wine she was allowed to drink. Most of all, she was focused on family. She was delighted to have the company of many family members in the last months of her life, and received word of the birth of her sixth grandchild while still alert. Some of her first words after regaining her speech, as well as some of her last words, were about her family, including instructions for future family gatherings.

Harriet died from the effects of a second major stroke. She is survived by her husband Rob; her sons Nicholas and James; her sisters Elizabeth Girard and Mary-Louise Rankin; her grandchildren Levi, Samuel, Simeon, Alayna, Hunter, and Jocelyn; and many extended family members. She was preceded in death by her parents and two of her sisters, Anne Backus and Janet Morgan.

A Celebration of Harriet's life will be:
Saturday, October 6th at 11:00 am at
St. Anne's in-the-Fields Episcopal Church
147 Concord Road
Lincoln, Mass. 01773

In lieu of flowers, donations can be made in honor of Harriet Todd to:
Friends of the Town of Lincoln Council on Aging
15 Bedford Road
Lincoln, MA 01773
https://www.lincolntown.org/132/Council-on-Aging