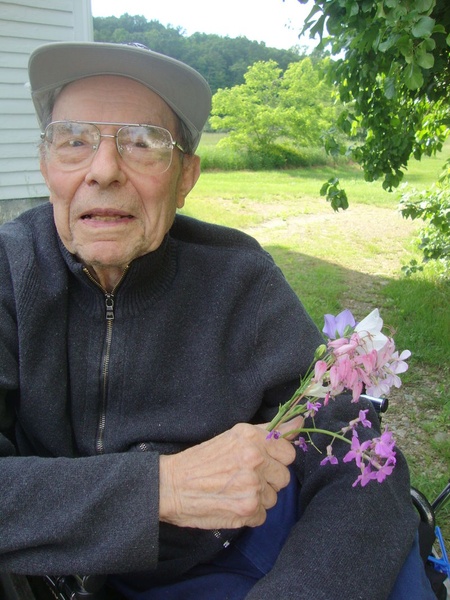 Henry Rice Flint died peacefully on October 15, 2012, in the house he was born in on September 18, 1917. Henry had recently celebrated his 95th birthday in the company of many dear friends.

He was born on September 18, 1917, the son of the late Edward F. Flint Sr and Josephine (Ritchie) Flint. Henry was also the brother of the late Edward F. Flint Jr, Margaret R. Delling, and Charlotte H. Flint. Henry graduated Cambridge School 1935, taking additional courses at Franklin Institute, Boston, Boston University, M.I.T., Cambridge, and Northeastern University, Boston. He operated his father's farm from 1935- 1945. He was later employed by Trans-Sonic., Minneapolis-Honeywell Co. and Baird Atomic Co. Henry was a long-time member of the Appalachian Mountain Club and of the First Parish Church, Lincoln, MA. Henry was a life-long bachelor.

Henry's life-long passion for the natural world kept him outside as often as possible. In his younger years, Henry enjoyed hiking and skiing in the White Mountains and swimming and boating in Farrar Pond with friends. Henry's decision to stay on the family farm proved him to be both a loyal son, and a true Flint. Henry worked in the family McIntosh apple orchard and the farm greenhouses. The delicate stevia flower was one of the primary crops, used in flower arrangements and sold at the Boston Flower Market during the early morning auctions. One of Henry's proudest moments was being awarded, by Henry Ford himself, his beloved "Sophia," a Ford 9N tractor, in the New England Regional tractor operating finals in October of 1940, when a member of the National Farm Youth Foundation. Henry's mental ability and mechanical aptitude helped him in the winning of the contest when he corrected the settings of the supplied equipment, and wouldn't let the rain slow him down.

In his later years, when slowed down by physical limitations, plowing the winter snows, mowing his lawn, tending his garden beds and keeping an eye on his bluebird houses brought Henry enormous pleasure. He was once heard to say that flowers and birds were the 8th and 9th Wonders of the World. Henry delighted in memorizing poetry and scripture, keeping his mind sharp while reciting favorite writings over and over again. William Bryant's "To a Waterfowl" was "memorized by heart when moving pots in the greenhouses."

Despite the challenges he faced, Henry remained ferociously independent and totally uncomplaining. He was full of childhood stories of growing up on the farm, full of good humor, and was always more concerned about others and how life was going for them. He was grateful for the sight of friends stopping by for a visit. (The door to his home was always open, or you could find the key outside in a plastic container to the right of the door.) Henry will be dearly missed by the many who were inspired by his stalwart attitude to "Keep on keepin' on!" He is survived by nieces and cousins.

Gifts in his name may be made to:
Codman Community Farms
58 Codman Rd.
Lincoln, MA 01773
www.codmancommunityfarms.org