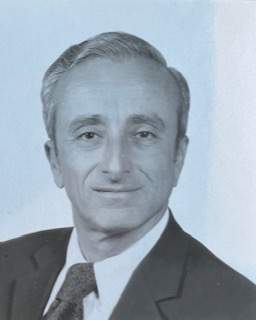 Jacques R. Maroni died on September 8, 2022, at the age of 99.  Born to Robert and Valentine Maroni in Paris, France on January 9th, 1923, he graduated from Lycee Janson de Sailly in Paris, the Massachusetts Institute of Technology (class of ‘43) and the Harvard Business School (class of ‘48).   A US Navy veteran who served in World War II, he worked for the Ford Motor Company for 37 years and was married to his beloved wife, Marilyn “Linette” Maroni, for 62 years.

He was raised in the 16th arrondissement of Paris and developed lifelong passions for tennis (competing as a junior in the French Open in 1938) and skiing (enjoying his last runs at Alta when he was 89).   He was generally on the first and last chairs of the day, but always left the mountain to have lunch with his wife when she stopped skiing.

After the fall of France in June 1940, his parents placed him and his brother on one of the last tugboats to leave the St. Malo harbor for safety in England, and later the US.  He loved the energy of America and went to work at Ford after attending Harvard Business School on the GI Bill.   He held various executive positions over four decades, the most important of which was an assignment with an advertising executive and his assistant on marketing a new car.  He married the assistant, and the marriage lasted.  The car was the Edsel, and it did not.

He had prodigious curiosity.  He held the patent for the automatic pilot and was the first person at Ford to use a computer in the fifties.  He concluded his Ford career as Director of Energy and Environmental Planning, where he encouraged the company to support alternative sources of energy in the seventies and eighties.

After retiring in 1988, he moved to the house his father built in Lincoln, Massachusetts in 1952.  There he focused on landscaping the fields, as his father had before him, and investing in technology.  He loved the outdoors.

His singular focus, however, was always his family.  He would hold hands with his wife, take pride in his daughter’s medical career and compare investment ideas with his son. However, he became most focused on his three grandchildren.  Bopop (a name he warmed to gradually) loved their special days together when they were young and learning about their adventures when they became adults.  He would often speak of his childhood in Paris, and took great pride in family trips with his grandchildren to explore his favorite city.

He was born in his parent’s apartment in Paris in the 1920’s,  and died in his parents home in Lincoln in the 2020’s.  To the end, he vividly remembered every decade. He loved new ideas, hated small talk and devoured books on future technology and world history in equal measure.

He leaves behind his wife, Linette Maroni of Lincoln, Massachusetts; his sister, Claudine Harris,  of Iowa City, Iowa; a daughter and son in law, Jaman Maroni and Mike Terry of New York City, NY; a son and daughter in law, Kevin and Polly Maroni, of Brookline MA; and 3 grandchildren, Polly, Kate and Jack Maroni.

Services will be private
Donations in his name can be made to:
Emerson Hospital
133 ORNAC
Concord, MA 01742
www.emersonhospital.org