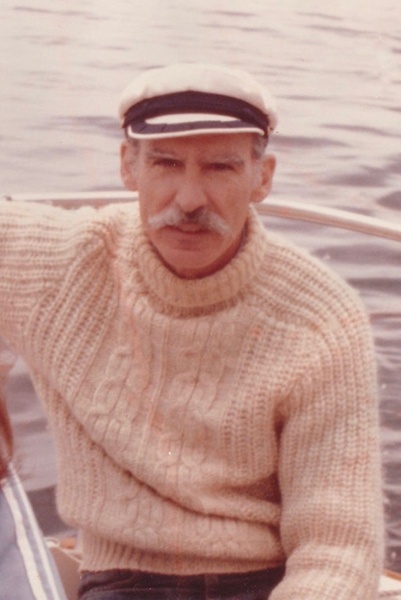 Born in St Paul, MN, the son of James Dwyer and Helen (Gallagher) Dwyer, he met his beloved wife Carol (McConville) Dwyer while playing folk guitar for ski-club gatherings in Franconia, NH. He remained and avid skier, and loved Cannon Mountain. MIT graduate and chemical engineer, he worked for many years at Millipore Corporation, from its modest beginnings in Bedford MA. Sailing, white-water kayaking, hiking, wood-working, music, and flying small aircraft were among his many interests.

Family and friends will gather to honor and remember James for his funeral mass on Saturday, February 6, 2021 at 10:00 am in Holy Family Parish, Monument Square, Concord Center, Concord, MA. Burial will follow at Sleepy Hollow Cemetery.

To watch James' funeral mass please use the link below:

In lieu of flowers, donations in his memory may be offered to:
Angel Flight NE,
492 Sutton Street
North Andover, MA 01845
www.angelflightne.org

My father, James Dwyer, always gave the impression of gliding along on an even keel; guided by scientific principles; his enduring, thought quite private faith; and an understanding that our collective past informs the present.

He was fiercely independent, yet also consistently loyal and true to what he believed.

He worked hard both at his career and his life and he challenged himself constantly. He adapted, always ready to take in something new, evolving in his thinking, his understanding of his world—though not in his place in it. That didn't change.

Though he was from the midwest he made a really good Yankee. We had a saying in or family that things were "perfectly good." Old coffee, rubber bands that had been stretched to the limit, ski parkas that even Cannon skiers were embarrassed by. But "perfectly good" summed up a way of life: efficiency, independence, learn to do things for yourself.

There were so many ways in which my father invented himself throughout his life, and I think he was largely pleased with his work. My mother described him (with a bit of a wink) as a prince: the center of his family's attention, popular with others, good at everything he tried. He excelled at sports: setting high school records for the fastest mile in running and competing in swimming and diving. He was an accomplished outdoorsman from a young age, earning the title of Eagle Scout. He acted and sang in local theater productions.

Music was always essential to him. He played flute and saxophone in his school bands in high school, college, and in a Jazz band while in the army down south.

We remember him playing flute when we were children, and always guitar throughout his life.

He first taught himself to ski on a golf course in Wisconsin. That's very indicative of who my father was: if he wanted something, if he wanted to learn something or be something, he worked and made it happen. In fact that's how he got his job at Millipore Corporation where he worked for most of his career. He wasn't actually qualified to play a leading role in a small yet rapidly expanding business, but he knew he could be, and talked his way in.

Similarly, he wasn't really prepared for MIT where he learned everything he would eventually bring to Millipore. In fact, he confessed that he nearly failed out early on: he couldn't compete with the private school kids who grew up with wealth and privilege and access to all that those things bring. But he was scrappy or perhaps resourceful enough to get himself on track, succeed and graduate with a degree in chemical engineering.

All the while fostering new friends, new interests: taking sailing lessons on the Charles River, skiing on actual mountains in New Hampshire, meeting my mother after (as she tells the story) dating all her friends. She always said he had to marry her, as there were no women left that he hadn't already gone out with.

They lived a full life: driving up to New Hampshire for hours after work ended on Friday, staying in one of the old ski clubs until having young children and buying their own falling apart farm house, (actually and old parsonage), that he repaired constantly, gathering on Saturday night to drink beer, play guitar and sing songs at the Horse and Hounds Inn with constant friends, hitting the slopes the next day. The goal always to be at the bar for last call, and up for first tram on the mountain.

Their antics on the mountain were legendary. He belonged to a club called the "Boomers," famous for their late night reveling and bold skiing. My favorite of their many songs describes an incident where my father flew off the side of a trail at Burke mountain and straight into a tree. As he hung there upside down, unable to extract himself from the branches, I believe his friend Doug Sullivan shouted: "hey there Jim, can I have your all day ticket please?" knowing my father had no use for it in the tree.

My father eventually taught us all how to ski with what he remembered as endless patience, even if it felt a bit different to us at the time. He was in many ways a man of his time. He exemplified the hope of the post-war era, a rapidly expanding economy, new innovation in technology, a firmly held belief that hard work brought prosperity, security and perhaps a bit of adventure for those who sought it. And my father sought it.

I used to joke with friends that you could count on two things to happen every weekend while we were growing up: you went to church, and you risked your life doing some sport that many today would consider inappropriate for young children. And tell the truth, some of us felt the same way at the time though we cherish those experiences now.

Of course I'm exaggerating. Our family was blessed with safety and security throughout my lifetime, something so many people around the world do not enjoy. But my father did like his adventures too, and instilled that confidence and spirit of seeking in others. From his infamous "shortcuts" that turned the family station wagon into an off-road vehicle, to righting himself and others stuck upside down in an eddy while whitewater kayaking, or organizing various family break-ins of tourists sites like Lost River and the Flume as he found it ridiculous to pay for what should be free in nature.

From clearing Tuckerbrook trail off the back side of Cannon Mountain with a hand saw, to his willingness to travel anywhere with 4 little kids including the wilderness of Northern British Columbia where we camped on the beautiful tundra over the Fjords, with the mosquitos so thick we had to cook in the tent. We never really knew if he was brave, or just confident in what he could do, and in what others could do as well.

Hiking, white water kayaking, sailing, always swimming a full lap underwater on one breath in the pool, soaring, flying. All solo sports. It sounds like a life of constant movement, but if you know him you remember him being still, working meticulously on a woodworking project, playing a song, reading a scientific journal or Science Fiction novel, listening at the dinner table to everyone else before weighing in himself.

Always growing, always learning. There was a time he travelled quite a bit for work. He would come home and tell us stories about navigating completely new situations for him: not knowing how to eat sushi, how to avoid too many shots of vodka with Russian businessmen without being rude. He grew from every experience.

He was always working on something. Building furniture like the famous radiator cover in the kitchen designed with a prominent curve so my mother couldn't stack papers on it and defeat the whole purpose of a radiator cover. Supporting a charity in Ecuador that taught boys self-sufficiency and job skills. Working with others to create the Franconia Soaring Club and making it a fixture in the area. Flying patients who couldn't afford or access transportation to area hospitals for medical treatment. Endlessly working on his homes in Concord and Franconia, making sure they were ready for when he couldn't fix them anymore. Making sure they were all set for us.

In so many ways, my father created the man he was. Yet for anyone who knew him there was always that solid core that never changed, never shifted, no matter what. Going to church every Sunday, or sometimes Saturday night in ski boots to ensure we could both give thanks and hit the slopes early the next day. Eating dinner with his family each night where we discussed everything from the minutiae of our lives to world politics in great detail.

He spent every weekend, every vacation, all his time when he wasn't working with his family, working on his home, or in his wood-shop creating something both beautiful and functional.

I wore his college ring when I was writing this, the weight and insignia reminding me of him.Whenever I look at it, I think of MIT's motto, also the motto of the high school all his children attended: mens et manu, mind and hand. Together they create the products of the other; they create who we are. And that was my father: a thinker, a doer, a creator, a person of the mind, and the hand.

My father is gone now, yet we have so much of him still, for which I am so very grateful.

From far, from eve and morning,
and yon twelve-winded sky,
the stuff of life to knit me
blew hither; Here am I.

Now - for a breath I tarry,
nor yet disperse apart-
Take my hand quick and tell me:
what have you in your heart.

Speak now, and I will answer;
How shall I help you, say;
Ere to the wind's twelve quarters
I take my endless way. A.E. Housman