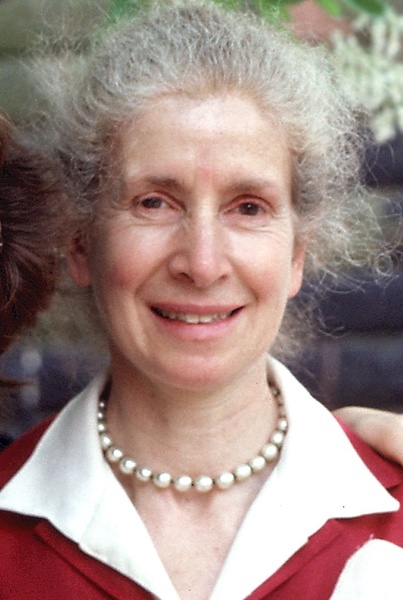 Jane de Peyster (Peck) Alexander died peacefully at her home in Concord, Massachusetts on January 3, 2013 at the age of 89.

Jane was born on April 3, 1923 in Boston to Helen Arden (Peabody) Peck and the Reverend Charles Russell Peck. She had two brothers, Russell and George. The family moved to Concord, Massachusetts, in 1932 when her father became rector of Trinity Episcopal Church on Elm Street.

While growing up in Concord, Jane attended Shady Hill School in Cambridge and the Concord public schools, and graduated from Concord Academy in 1941. During the summer, the Pecks spent time in Princeton, Massachusetts, where her Russell ancestors had lived for many generations.

From 1941 to 1943, Jane attended Mills College in Oakland, California. She finished her undergraduate education at Radcliffe College in Cambridge, graduating in 1945 with a degree in Psychology.

Jane moved to New York City where she worked as a governess, a teacher at the Riverdale School and studied at Columbia University, graduating with a Masters Degree in English and Comparative Literature. She received the top grade for her thesis on 17th century witch-beliefs in England and America.

In 1950, she moved to Cambridge where she worked at Harvard University Press in the production design department. In 1952 she met her husband Samuel Alexander, a research chemist, at a square dance in Porter Square, Cambridge. The initial attraction was deepened by their mutual political activity in the Adlai Stevenson campaign for president.

On October 10, 1953, Jane and Sam were married by her father at the First Congregational Church in Princeton, Massachusetts. The couple first lived in Cambridge and then moved in 1955 to an 1842 farmhouse in rural Boxboro, Massachusetts. Soon the household grew to include three children, Kevin, Arden and Faith, and Sam's mother Amelia Alexander, a native of Italy. Jane was a frequent caretaker of a varying population of family pets including cats, dogs, rabbits, guinea pigs and a Jersey cow. Reluctant to waste excess milk, Jane ventured into yogurt making using a stovetop system devised by her husband.

They also started their decades long hobby of organic gardening with a large vegetable and flower garden. Jane carefully nurtured the bearded iris a Mills professor had sent her and successfully transplanted the plants to gardens in all their successive homes.

In Boxboro, Jane participated in many civil rights, educational and peace organizations including the Voice of Women, the Women's International League for Peace and Freedom, the Green Circle, which promotes racial, ethnic and religious understanding among young people, and the Nashoba Fair Housing Committee. In 1956, Jane was asked by the Congress of Racial Equality (CORE) to protest racial segregation at Woolworth's lunch counters in the South, by picketing at the Concord store. In the 1960s, she and her husband were two of the founders of the Nashoba Association for Equal Rights ( NAER), which worked with local and national civil rights organizations.

In that same period, Jane and her husband brought to Acton, a production of Shakespeare's Twelfth Night by the People's Theater of Cambridge, a racially integrated players group. Jane organized lodging, meals, and facilities for the actors and worked on the program, publicity and tickets. The play attracted about 1000 attendees to its sold out two performances.

Jane and her husband were also active in the folk dance community as members of the Country Dance Society (CDS) and attendees of Pinewoods Camp. They volunteered for the New England Folk Festival Association (NEFFA) at their an annual celebration of music, art and dance. Jane served in the PTA and as a Brownie and 4-H club leader, teaching children crafts such as making puppets and painting.

In 1980, Jane and Sam moved to Concord, Massachusetts where they continued their political and community activities. Jane was a major organizer in the campaign to clean up depleted uranium waste at the Nuclear Metals, Inc. site in Concord. She dedicated much time and energy to organizations working on this effort including the Citizens Research and Environmental Watch (CREW), and received an award for her activism in 1993 from the Massachusetts Campaign to Clean Up Hazardous Waste.

Jane also was a member of the Concord Peace Vigil held on Friday mornings at the flag location near Concord Green. Along with Sam, she organized regular swing, square and contra dances at the Concord Scout House as fundraisers for Concord's San Marcos Sister Cities Committee. She was also a member of the North Bridge Food Coop for many years. Her connection to Concord Academy remained strong through her friendships and annual reunions.

As keeper of the family history and genealogy, Jane cherished and shared pictures, stories and artifacts she had inherited from her parents and their British, French Huguenot, and Dutch ancestors. She enjoyed attending family reunions in Princeton, Massachusetts and Clermont, New York.

In the 1990s she gained fulfillment from working as a nurse's aide at Rivercrest Nursing Home and at a local daycare center. For many years she was a docent with the Lexington Historical Society, educating visitors with her deep knowledge of colonial history at the Hancock-Clarke House and the Munroe Tavern. She enjoyed visits to many of the historic houses and museums in New England.

Jane's travels started with girlhood visits to England and France. She also took trips with her husband to the Soviet Union, Sweden and England; visited her children in Colorado and the Washington, D.C. area and vacationed in Cape Cod, Martha's Vineyard and Maine.

Jane will be remembered for her gentle, loving and kind spirit; her generosity to family, friends and others; her steadfast commitment to activism for world peace, the environment and civil rights; and her delicious natural food meals and gatherings. She was the heart of our family, and she is greatly missed.

She was predeceased by her brother George Peabody Peck, of Princeton, Massachusetts.

A memorial service will be held in the spring.