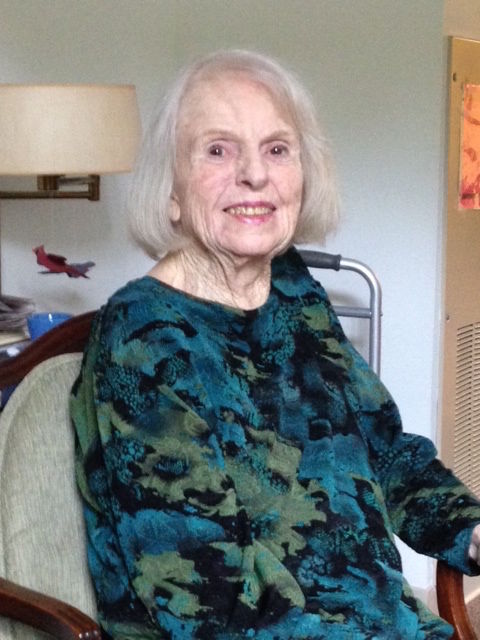 Janet Beach Daniels, age 90, passed away peacefully at her residence in The Gardens at Newbury Court in Concord, Massachusetts on January 13, 2015. Janet was born in Guilford, Connecticut on Feb. 23, 1924. She was the fourth of five children born to Rev. Dr. David Nelson Beach and his wife Marguerite Mills Beach. She was named after her mother's dear friend Janet, who had no children of her own, and subsequently spent many childhood summers visiting with "Aunt Janet and Uncle Frank".

Her father's career as a Congregationalist minister led the family to live in many places during Janet's childhood, including Pawtucket, RI, where her only brother was born; Belmont MA; Springfield, MA; and Minneapolis, MN, where Janet attended middle school, high school, and two years at Carlton College before moving back east with her family to New Haven, CT.

Janet used to comment that as children, with each move they were allowed only one suitcase for their most prized possessions. Hers included many books and a felt doll, which remained on her shelf or dresser until the last years of her life. Janet was a born storyteller and frequently told stories about her brother David and her exploits with her older sisters Judy, Barry, and Mart, especially as they entered adolescence. She cherished the summers the family spent at their camp on Lake Lucerne in Maine, where she learned to swim and attended "Singing Eagle Lodge" camp for girls.

After moving back east from Minneapolis, Janet continued her college education at the University of Connecticut, where she received a Bachelor's degree. While there, she met the love of her life, Bruce Goddard Daniels, on a double date with his close friend, her brother David. Janet remembered her mother saying to her, "You need to make sure you treat this one right!" Janet and Bruce were married on Oct. 16, 1948. Janet and Bruce spent nearly 54 years together, during which time they lived predominantly in Lincoln, MA and raised five children. Their favorite thing to do together was travel. Their honeymoon took them on a tour around South America, including visits to Machu Picchu in Peru and Sao Paolo, Brazil. In later years they would travel to China, Russia, Egypt, India, Cambodia, Mexico, and many countries in Europe.

Janet served as first woman President of the Board of DeCordova Museum in Lincoln in the late 60's. She volunteered at Emerson Hospital; the Marine Biological Laboratories gift store in Woods Hole, MA where Bruce and she owned a summer house; and was a member of the Lincoln Garden Club. She loved to play cards, particularly bridge, solitaire, and cribbage, which she played every day with Bruce after breakfast. She loved tennis and paddle tennis, and played both until she was in her 70's. Most of all, she loved to read, and all her children can remember her engrossed in the newspaper or a good book.

In lieu of flowers the family would like to respectfully request that donations be given to:
Lincoln Public Library in memory of Janet Daniels
3 Bedford Road
Lincoln, MA 01773
www.lincolnpl.org

A celebration of her life will be scheduled later in the spring.