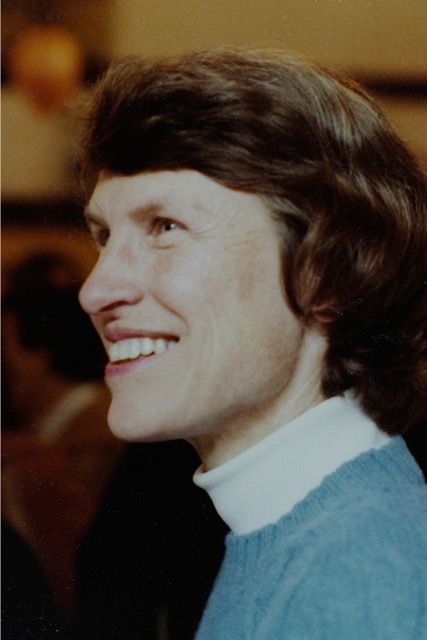 Jean G. (McCouch) Bell, age 89, of Monument St. in Concord, peacefully passed away of natural causes on Sept. 8, 2016. A Concord resident since 1957, she was the devoted and loving wife of the late Gordon K. Bell for 58 years. She conceived, founded, and served multiple organizations with dedication and accomplishment. Jean and Gordon were named Concord's 2004 Honored Citizens for their unselfish commitment, persistence and positive impact on those and other local organizations.

Born on March 5, 1927, Jean was raised in Chestnut Hill, PA, the daughter of the late Eric A. and Elizabeth (Armstrong) McCouch. She attended Springside School and was the first woman in her family to graduate from college, earning a B.A. in History in 1949 from Wellesley College. After college she worked in the State Department in Washington, D.C., which is where she met Gordon. Married in 1953, Jean taught for two years at Hamden Hall Country Day School while Gordon attended law school.

In Concord Jean's "career" was as a quiet but determined leader and organizer of community organizations concerned with social justice. While perhaps her most enduring legacy, and what she is best known and honored for, is as the co-founder of two organizations that grew from the card table in her home to become charitable corporations – Concord Prison Outreach and Communities for Restorative Justice – Jean's unselfish commitment to the people of her community began in the 1960s when she founded the Clergy Lay Group in 1962 and served as the President (1965-1967) of the Concord Family Service Society, one of the earliest (1814 founding) charitable organizations in the United States. In the early 1970s she co-founded Widening Horizons, a volunteer and career information clearinghouse that helped women move beyond the homemaker role. From 1976 to 1982 she served on the Town's Hugh Cargill Trust Committee.

In 1983, along with Diana Clymer, she founded Concord Prison Ministries, a community group of volunteers who provide educational programs – Alternatives to Violence, Job Searches, Family Relationships, GED and ESL classes, etc. -- within Concord's two prison facilities. In 1999 as she prepared to step down from the Board of what had become Concord Prison Outreach, Jean estimated that about 1,000 people in the community had volunteered their services.

With the incorporation of CPO complete, Jean left the Board in 2000 to immediately found (with friend Joan Turner) Concord's Restorative Justice Circle. Emphasizing community healing, shared ownership, and responsibility, the Circle, now Communities for Restorative Justice (C4RJ), complements the traditional judicial system by providing services to all people affected by crime. The Circle grew quickly and became incorporated as C4RJ in 2006 when Jean "retired". Today C4RJ has expanded to serve in 15 communities in the greater Boston area.

A dedicated member of Trinity Episcopal Church for 59 years, Jean served on the Vestry, its Social Ministry Commission, the Concord Committee for the Needy, and the Inter-Church Refugee Committee in the 1970s, 80s, 90s, and 2000s. She was also a League of Women Voters member for over 50 years, and served on Concord's Board of Directors from 1992-1999, chairing its Observers Corps.

Jean was also proud of her case aide work for the Emerson Hospital-Aftercare Program in the 1980s and her 25-year membership in the Ladies Tuesday Club.

In 2015 she was nominated by Rep. Cory Atkins and honored by the state as one of Massachusetts' Unsung Heroines.

Jean is survived by her three sons -- John Bell and his wife Jil Westcott of Bristol, RI, Donald Bell and his wife Betsy McNerney of Oak Grove, MN, and David Bell of Concord – and her goddaughter, Meg Luther, of Fargo, ND. Her four grandchildren – Lauren, Henry, Grace, and Maria – and five nieces and two nephews also survive her. She was pre-deceased by her younger sister Ailsa Thompson, whose daughters she was close to.

Concord's town flag will fly at half-staff on Saturday, Oct. 22 in honor of Mrs. Bell's status as an Honored Citizen.