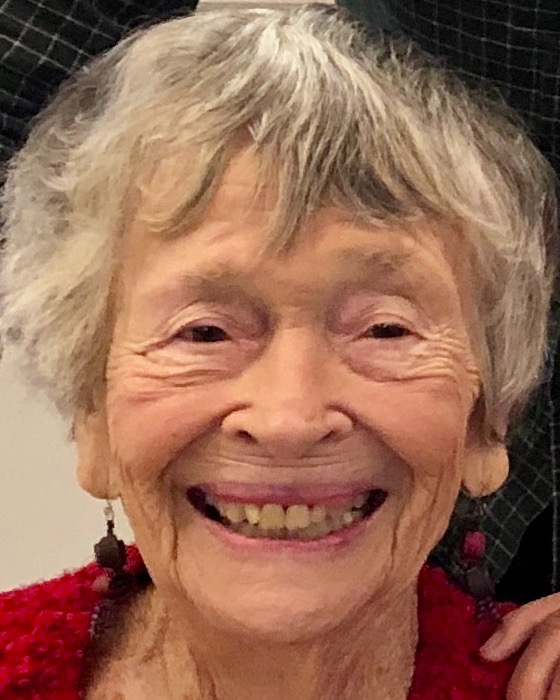 Jeanne Macmillan Morse died peacefully of natural causes in the early morning of October 9th at her home in Concord, Massachusetts at the age of 94. Her devoted caregiver Clara Rivera was by her side.

Jeanne was born in Columbus, Ohio on June 14, 1928, the younger of two daughters, to Caroline and Philip Kuhns. She attended schools in Columbus and graduated from Ohio State University in 1950. During her time at OSU, she was involved in a variety of liberal causes and even targeted as a possible communist sympathizer for associating with a professor on the Joe McCarthy watchlist. Encouraged by professors and peers to pursue graduate school in a more liberal-minded city, she moved to Boston, Massachusetts to study nutrition at Tufts University. There, she met Alexander "Sandy" Stewart  Macmillan, Jr. a medical resident at Massachusetts General Hospital. They married in 1951, and after a brief stint in Oak Ridge, Tennessee, lived in Boston, eventually moving to Wayland, Massachusetts where they raised their six children. In addition to running a busy household, Jeanne was an active birder and tennis player; member of her church vestry, Wayland Garden Club, and Sudbury Valley Trustees; and volunteer for Wayland’s Democratic party. She took great pride in creating a beautiful home both inside and out.

Following Sandy’s death in 1978, Jeanne eventually moved back to Boston where she found engaging work: Harvard Business School’s affirmative action program, the Children’s Literature Foundation, and Harvard University’s food committee. She also ran a financial consulting business for a small group of elderly clients whom she adored, and who adored her. After 10 years in Boston, she moved to Lincoln, Massachusetts where she reconnected with a dear old family friend, Charles Fessenden “Fez” Morse, III. They married in 1996 and enjoyed spending time together with old and new friends. They loved to travel, enjoying especially each other’s family summer homes: the Macmillan’s on Prince Edward Island, and the Morse’s on Harbor Island, Maine. In Jeanne’s later years, she and Fez enjoyed family visits, oftentimes while sitting outside, overlooking their riverside view of the Concord River. They’d keep close watch over passing boats and birds, reminiscing about times past with family and friends.

Jeanne will be remembered for her infectious smile and kind heart. She was a favorite second mom for many of her children's friends, and an excellent cook. She loved living in the neighborhood atop "the hill" on Lincoln Road in Wayland. She regularly attended her children’s athletic events and volunteered for UNICEF. She is the last of the “Fancy Ladies”, a group of neighborhood friends that gathered on a regular basis to crewel, share their life stories, and spread good cheer with a fine glass of sherry.

A memorial service will be held on Saturday, December 3rd at 11:30 a.m. in Duvall Chapel at Newbury Court, 80 Deaconess Rd. Concord, MA.

To view the service remotely, activate the link provided on the time and date of the scheduled service.

The family would like to extend a warm thank you to Jeanne’s caregivers who provided so much loving care during her final years of life: Clara and Oscar Rivera, Alba Menendez, Ana Chavez, and Ola Moran. We would also like to thank the staff of Newbury Court and Starline Hospice.

In lieu of flowers, donations can be made in Jeanne’s name to:
Massachusetts Audubon Society
208 South Great Road
Lincoln, MA 01773