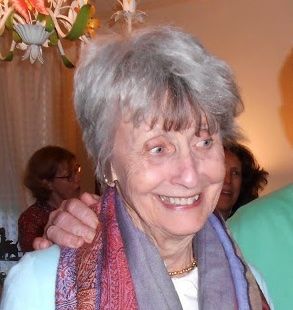 Jeanne Françoise Peter Ruggles, known as "Janot," a long-time resident of Concord passed away on May 24, 2016 at Emerson Hospital. She was 86 years old, and for 65 of those years, the wife of Thomas M. "Smiley" Ruggles.

Her father, a Swiss émigré from Geneva, spoke French to her from childhood, and as a teenager, Janot spent time on the shores of Lac Leman with her paternal grandparents. All her life, she treasured her lasting relationships with her Swiss cousins and was proud of her grandfather who had served as Swiss ambassador to the United States starting under Woodrow Wilson's presidency and continuing through FDR's administration.

Janot married Tom Ruggles, of Marblehead, MA, in 1951 in the Appleton Chapel at Harvard University. After Tom completed his military service, they settled in Marblehead, where three daughters were born. With two daughters attending Concord Academy, they moved to Concord in 1969.

Jeanne taught French at Tower School in Marblehead and Shore Country Day School in Beverly, becoming head of the French Department. She completed her career at Beaver Country Day School in Brookline. An inspired teacher, she took pleasure in creative teaching methods such as staging a French café in classes on Fridays, and she served as an advisor to many beloved students. One of these, Kim Nguyen, became a virtual family member, and her daughters Isabelle and Michelle became additional grandchildren. Another adopted family member, to whom Janot felt very close, was Eddie Neal, who came to the Ruggles family through her husband's participation in the Big Brother Program.

In the year 2000, Janot and her sister Linette organized a family reunion in Switzerland, bringing together 33 American relatives with their Swiss cousins. Trips to Switzerland were among her greatest pleasures, as well as time spent in Cape Porpoise, Maine. In retirement, she tutored children at a public elementary school in Waltham, helped sort books for the Concord Library book sale, and followed politics and current events with relish.

Along with her husband Tom, surviving family members are her daughters Rebecca L. Ruggles of Baltimore, MD, Mary Ann D. Ruggles of Somerville and D. Fairchild (Dede) Ruggles of Urbana, IL. Her grandchildren, who called her "Mémé" and "Mimi," are Thomas Ruggles Holman, Rada Elizabeth Ruggles, and Isabel Fairchild Vázquez, and her great-granddaughter is Eve Adrienne Holman. She is also survived by her brother Georges Peter and sister Linette French.

In lieu of flowers, gifts in her honor may be made to:
Kennebunk Land Trust
6 Brown Street #2
Kennebunk, Maine 04043
Or visit: www.kennebunklandtrust.org to support their mission of land preservation in a place she loved.