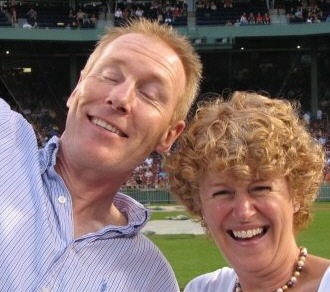 Jeff Rees, aged 58, died June 8th at his home in Concord, Massachusetts, surrounded by his immediate family. He had courageously fought an aggressive melanoma for the 7 months prior to his death.

Jeff was born in Trowbridge, Hampshire, England on February 16, 1952. He was the third child of Arthur and Lavinia Rees. His older sister Christine pre-deceased him last year, but he is survived in England by his mother, his older sister Jennie, and his younger brother Graham. Jeff went to Caterham School and then Clare College at Cambridge University, from whence he graduated with a modest degree but a great many friends and sporting and drinking skills, many of which have stood the test of time.

Jeff met his life partner, Sue, while at Cambridge. Theirs was a speedy courtship—unlike Jeff, Sue doesn't take long to make decisions—and they were married in Littleton, Hampshire on March 9, 1974. It should be noted that at this time, the groom had considerably more hair than the bride.

Jeff worked his whole life in the computer software field, most recently for Hewlett Packard, and gained three patents on seemingly incomprehensible software designs. He was the rare software engineer who not only eschewed pocket protectors, but also made friends easily and looked them in the eye and smiled when communicating. Most recently his offices were in his homes in Concord and Cape Porpoise, Maine, but he also worked in London UK, Bath UK, Cambridge UK and US, Littleton MA, and Roseville CA.

Jeff was known for leading great adventures—biking from Maine to Concord the week prior to his diagnosis, hiking up mountains or across wildernesses regardless of the weather, vacationing worldwide while consuming large quantities of food, exercise, and wine (not necessarily in that order), scaling walls, sailing, kayaking, running, biking, roller-blading, skiing, swimming (including annually in Walden on January 1st and other special occasions), and putting friends and future sons-in-law through arduous challenges. Jeff was also an enthusiastic gardener, NPR listener, lifelong learner, and teacher who loved to play, giggle and fart—again, not necessarily in that order. His last social function was two weeks ago when friends came from far and wide to celebrate with him and share stories, old movies, and photos—this event was generously hosted by Dave and Michelle with catering arranged by Lucy and Bar (thank you).

There is ample evidence that Jeff’s greatest joy, as well as occasional exasperation, was derived from us, his family. He and Sue were able to anticipate each other’s thoughts, and thankfully in recent months, complete each others sentences. This is not to say that we were always in total agreement, just total loving understanding and support of each other. He had so much love for and pride in his daughters—for their strength, fierce independence, and passion for causes and each other—as well as their significant others and children. Every single day we were thankful for our beloved children and their families, and thrilled in watching them grow.

Jeff’s easy smile, his authenticity, and his giggle gained him a multitude of friends who have all contributed to his life in so many ways, especially in the past few months. He had wonderful visits from three of his dearest friends from England—his grade school friend Geoff, his college room-mate Ian, and his rowing/drinking partner in crime, John. These three gave up much to share his last few weeks with him, and he was very touched by their visits. The Care Calendar allowed for dozens of friends to support Jeff with food, visits, and rides to the doctor, and this allowed him to continue to live a full and independent life until the last couple of days. The social functions to which we were invited and the many visitors we hosted helped complete his life. Visits to Cape Porpoise with children and grandchildren, including mud walks and a seal-watching kayak ride, all helped him revisit the joys of life. The amazing kindness of our friends, including an extraordinary and generous contribution to his care costs, food, flowers, dog walking, hugs, and wine, are all a testament to Jeff’s love.

Those of us who will dearly miss him include his wife Sue of Concord MA and Cape Porpoise ME; his children, Amy Sommer and her husband Dave of Framingham MA, Laura Acosta and her husband Fernando of Newton MA, and Joanna Rees of Jamaica Plain MA; and his grandchildren, Alexis Sommer, Isabella Acosta, and Leo Acosta—who will miss kayaking with him, sailing with him, and story times on his lap. Also, his mother Lavinia, who still putters about her garden in Caterham UK, and his sister Jennie and brother Graham, who also live in the UK, will miss him sorely. Jeff died before he could pass on all of his wisdom to his godchildren, Henley Spiers and his niece Jill Clow, but they will hopefully observe a life well lived and follow his lead. Other family who will feel his absence include nephew Andrew Clow and his many lovingin-laws, including David Clow, John Preston, Tips and Drew, Giles Preston, Lou Preston, Ella, Finlay and Archie, David Cattermole, Will, Charlie and their families, and Richard’s family. Likewise, Jeff will be dearly missed by his many biking, running, eating and drinking friends—and most of all by his faithful companion and chief licker, Barley the mutt.

Fearless Friend and Father - you are with us always.

His ashes will be placed on his favorite island in Cape Porpoise, Maine in a private ceremony at a later date.

Jeff had bravely fought an aggressive cancer, and in lieu of flowers, donations in his memory may be given to the PMC on behalf of his three daughters, Amy, Laura, and Joanna, who will ride in August. There will be collection envelopes at the Church for cash or checks made out to Pan Mass Challenge c/o Concord Funeral Home, 74 Belknap St., Concord, MA 01742 or you may visit their websites at www.pmc.org/profile/LA0087, www.pmc.org/profile/JR0290, or www.pmc.org/profile/AS0251.