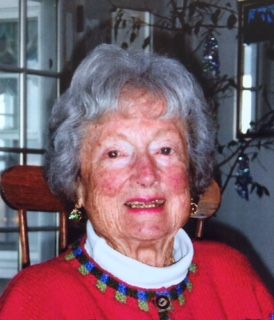 Joan Perrin Wood was born in Brookline MA on Feb. 14, 1924, the daughter of John Perrin and Beatrice Webb Perrin. She attended Winsor School where she first discovered her love of acting, starring in a much acclaimed performance of Kiss Me Kate, her senior year. A plaque in her honor, now placed outside the door to the new theater at Winsor, was generously donated by her beloved sister, Patsy Lawrence.

During World War II Joan worked first at MIT and then went on to become trained in Occupational Therapy where she worked at Danvers State Hospital until the end of the war. She married Orrin Wood Jr. in 1948, also of Brookline, and they initially settled in Toledo Ohio where their two daughters and twin sons were born in a short three and a half years. In that time she appeared several times as a guest on a television show that featured a panel discussion hosted by a local celebrity, Joe E. Brown, the famous actor and comedian. In 1955 the family relocated to Concord MA.

Joan became active in the Concord Players, an amateur theatre company in 1958 where she had roles in many of their plays from 1958 to 1992. She had a starring role in productions including Ruth in Blythe Spirit in 1967, Tituba in The Crucible in 1967, Madame Ernestine in Little Mary Sunshine in 1971, Marmee in Little Women in 1972 and Amanda in The Glass Menagerie in 1979. The production of The Glass Menagerie was awarded the Moss Hart Memorial Award (presented by the actress Kitty Carlisle) for its outstanding performance that year. The annual award honors New England play productions that " present affirmative views of human courage and dignity, which have strong literary and artistic merit and which, in their productions, exemplify fresh, imaginative creative treatments within the intent of the playwright."

Joan's most endearing role, much acclaimed by the general public, was as Aunt March in the productions of Little Women in 1962 and 1992. A 1992 review of the play in the Concord Journal read: "Aunt March is depicted by Ms. Wood as the archetype cantankerous old maid aunt, always showing the concern which underlies her dicta."

Joan was also a gifted artist and watercolorist. She started painting later in life and produced many landscapes of places where she had traveled as well as local memorable scenes of New England. She developed a distinctive style producing work that was filled with light and contrasting color and that evoked an experience of harmony and peace. Her work showed at The Concord Art Association and at 100 Newbury Court where she lived from 2005 on.

One of her greatest roles was as a grandmother to her three granddaughters and her grandson and, in the last two years, as a great grandmother to her great grand daughter. Joan had a tremendous curiosity about people and a knack for bringing people together. She loved spending time with her friends at Newbury Court and was always excited to meet new faces and invite new residents to her dinner table. She made an effort to learn everyone's name and to introduce residents to each other, always enjoying her time with them. She also maintained many long-term friendships, some that dated back to her early childhood. While she will be missed, Joan died peacefully in her sleep on June 23, 2016 at the age of 92. She is survived by her four children: Patsy Wood of Oakland CA.; Susan Wood of Hingham MA; Tim Wood of Weston MA; and Ned Wood of St. Louis MO. Her husband, Orrin died in May of 2009. She also has three granddaughters, a grandson and a great granddaughter: Julia Vermuelen of Tuscan AZ; Kaitlin Wood of Weston MA; Perrin Salewood of St. Louis MO; Ben Vermuelen of Bourne MA. and his daughter, Hollie of Wareham MA.

Gifts in her name may be made to:
Concord Players
51 Walden Street
Concord, MA 01742