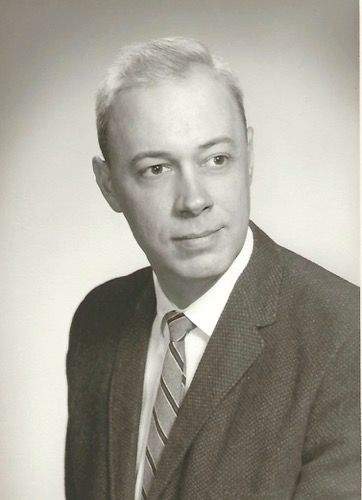 John Edwin Fries, Jr age 92 of Acton passed away peacefully on Saturday, May 14, 2016 at Sunrise of Weston. He was the husband of 66 years to Anne Kellogg Fries.

John (known to many as Jef) was born on January 30, 1924 in Brooklyn, NY to John Edwin Fries, Sr. and Matilda Hubachek Fries. Raised in Brooklyn and Queens NY, he graduated from Bayside High School and entered Massachusetts Institute of Technology. His education was interrupted as he was called to serve his country during WWII in the United States Army Air Force. He was stationed mainly in Canada and Alaska, functioning as a meteorologist forecasting weather for the military. Upon his return home he continued his education at MIT, graduating with a Master's Degree in Metallurgical Engineering.

Jef and Anne married in 1949 in Shaker Heights, Ohio. They raised their loving family in Meadville, PA for seven years, New Jersey for seven years then Madison, CT. Jef and his business partners owned and operated Nutmeg Steel Castings Corporation in Branford, CT until Jef's retirement in 1985. Jef and Anne then went on to spend ten years in Grantham, NH, seven years in Phippsburg, ME, becoming residents of Acton in 2002.

Family was always the center of Jef's life. He always cherished family time with his children, grandchildren and great grandchildren. Vacations, holidays and family celebrations were a huge highlight. He enjoyed boating and photography, among many other activities. He was also an avid reader and student of history, especially the Civil War.

Family and friends will gather to honor and remember Jef on Saturday, May 21 at 10:30 am in the Acton Congregational Church, 12 Concord Rd., Acton. A reception will follow in the church hall.

In lieu of flowers, donations in his memory may be made to the Maine Maritime Museum, 243 Washington St., Bath, ME 04530.