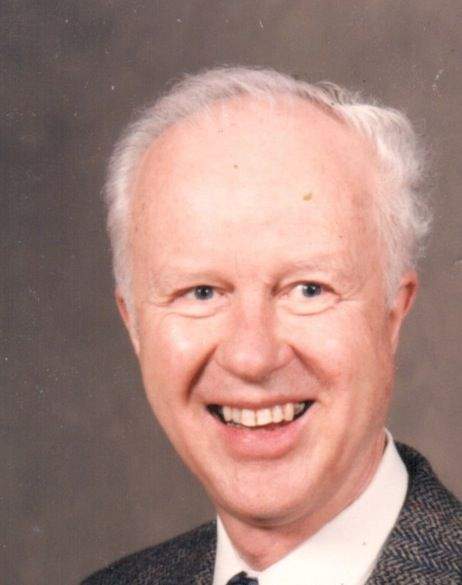 John is survived by his loving wife of nineteen years, Mary Ann, who, over the past several years was his devoted companion and caretaker. John had lost his first wife, Ione, to cancer after thirty-seven years of marriage. Ione is the mother of their three children.

A devoted father and grandfather, John is lovingly remembered by his sons David (Sarah) of Fairfax Virginia; Tom (Amy) of Overland Park, Kansas; and his daughter Anne (Tim Hampton) of New Market, Maryland. He is survived by six grandchildren: Jacob and Peter Gunnarson, Eric and Ben Gunnarson, and Matthew and William Hampton. He is also remembered by his sister Barbara Coloney of Bethesda, Maryland.

John was born in Minneapolis, Minnesota on October 10, 1925, the son of the late Arthur B. and Lillian E. Gunnarson. Together he and his parents celebrated their Swedish heritage. He moved with his family at the age of five to Washington, DC where he graduated from the Woodrow Wilson High School in 1943. At age seventeen, John enlisted in the US Navy and was assigned to the V-12 Navy Training Program at MIT from which he graduated with an BS in Mechanical Engineering in 1946. In 1950 he completed an MBA from Harvard Business School. Throughout his life, John took great pleasure in maintaining connections with MIT, Harvard and his classmates.

After graduating from business school, John worked for several engineering firms before joining Servodyne in Lowell, Massachusetts where he, Roger French and Donald Lester developed the first Klystron-powered Microwave Oven in 1961. In 2003, John donated the oven and corresponding patents to the Smithsonian Museum. This microwave oven is now part of the Smithsonian's History of American Technology collection.

Later, working at Metritape, Inc., Littleton, Massachusetts, as the CFO and Director of Engineering, John and its President and founder, Al Ehrenfried, with several colleagues, developed and marketed a resistance-tape level sensor that was sold to the shipping industry throughout the world. John retired from Metritape in 1997 at the age of 72.

One of John's many interests was music, and in particular, pipe organ music which represents the intersection of music and engineering. An early question posed to Mary Ann was, "Do you like organ music?" John acquired two pipe organs in the 1970's and spent two decades enjoying the challenge of re-building them. He was a member of the Organ Historical Society.

An interest in creating homes led John and Ione to design and build their home in Concord. Many years later John and Mary Ann designed and built a vacation home on the shores of Malpeque Bay, Prince Edward Island, Canada. This summer home was built so that all of John's children and grandchildren could visit at one time. These visits were the highlight of the summer for John. Family and friends who visited John and Mary Ann in Malpeque marveled at the home's beauty and its complementarity to the land. Throughout his life, John found great joy in his Concord and Malpeque social communities.

With a strong sense of community and service, John served on the Concord Public Works Commission for several years. He was delighted that he had chosen the town of Concord as a home for his family when he left Connecticut for Massachusetts. Visits from his children and grandchildren on Patriot's Day Weekend pleased him a great deal.

An enthusiastic reader, John was widely read in science, technology and music. In 2004, after losing his speech due to a stroke, John was assigned by his speech therapist a list of words to be read aloud. After two sessions, John indicated that the list was of little interest to him, and asked if he could read instead the biography of J.S. Bach which he had received the previous Christmas. The biography, while written in English, contained passages in German, French, Greek, Italian and Latin. He read aloud the entire biography.

John enjoyed travelling, and in particular enjoyed visiting his cousins in Sweden. One of his most cherished memories was being asked to read the lesson at Evensong in London's Westminster Abbey one September evening in 1995.

An active member of Trinity Episcopal Church, John served on the Vestry, several church committees, and was a faithful member of the church choir lending his rich baritone to featured anthems. He sang lead roles in Trinity's productions of Amahl and the Night Visitors and Noah's Floode. As a good Swede, John had held a lifelong membership in the Lutheran community before moving to Concord.

In lieu of flowers, memorial donations may be made to Trinity Episcopal Church, 81 Elm Street, Concord, Massachusetts with a designation for the Music Program, the Caring Connection or the Building Fund.

The Gunnarson family invite John's friends to join them for a reception in the Parish Hall following the memorial service, Saturday, May 11 at 2 PM