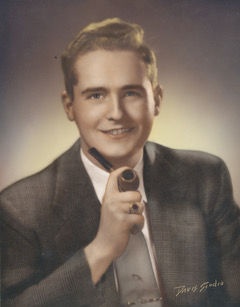 John Alden Lang passed away at home on Friday June 30th surrounded by his loving family after a long illness. John was born in Paterson, New Jersey January 15, 1931 to the late Priscilla Merritt Lang and the late Wilmarth Yeaton Lang. He grew up in Towaco, New Jersey, and subsequently graduated from Lafayette College in 1952 with a bachelor's degree in Electrical Engineering . He married Virginia Roe Lang in 1959 and also leaves behind daughter, Priscilla Ayite, daughter Dr. Martha Lang and her spouse, Lisa Waldman and son Jonathan Lang and his spouse, Summer Lang.

John worked as an Electrical Engineer throughout his professional career. He retired from Analog Devices after 36 years having joined the company when it was a startup. While there he published and presented many technical papers. Upon retirement, he participated in the Northeastern University RESEED program and then volunteered as a science resource person in the Concord Middle Schools for ten years. It was his hope to inspire more young people, particularly young women, to consider careers in science and mathematics. He also served six years on the Minuteman Regional High School Committee representing Concord.

John lived in a private railroad car for four years that was located on an abandoned spur track near the Sudbury River in Concord. It was here that John met Ginger, the love of his life, and later proposed to her.

John volunteered for several years with the Concord Players doing set construction, lighting and acted in a number of their productions.

Throughout his life, he enjoyed outdoor pursuits. These included organic gardening, hiking, sea kayaking off the Maine coast and fly fishing. He participated in a number of island clean-ups with the Maine Island Trail group.

John and Ginger had the joy of travelling to many parts of the world. Some of the trips were done as part of Ginger's business, Ginger's Journeys. These included walking 60 miles of the West Highland Way in Scotland, and hiking on the island of Madeira. They enjoyed many summers at the Appalachian Mountain Club's Echo Lake Camp and August Camp. They also had a memorable hiking trip in Alaska.

John enjoyed singing and sang first tenor with Saengerfest, an 80 voice men's chorus. Their concerts took him to many places including Royal Albert Hall and Carnegie Hall.

The latter part of his life was focused on volunteering in the workshop at Household Goods in Acton.

A celebration of John's life is planned for September 16 at 11 am at First Parish in Concord.

Memorial gifts in his name may be made to:
Household Goods
530 Main Street
Acton, MA 01720
www.hgrm.org.