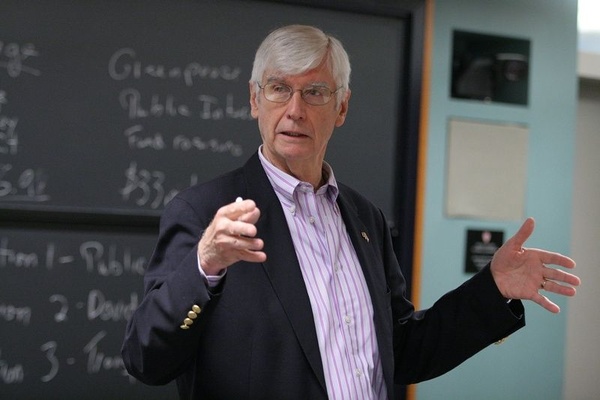 John Woodward Thomas, father, husband, scholar, world traveler, and lecturer emeritus in public policy at Harvard University, passed away on March 11, 2022, in Lincoln, Massachusetts, surrounded by family. His life was marked by a spirit of adventurousness, service to a greater good, and love for his family. A lauded teacher and author, he was never happier than when he was starting up a trail into the mountains, a pack on his back and an eager dog at his side.

John was born in Philadelphia in 1933, the only child of a Northern Baptist minister and a poet. A lanky, three-sport athlete and wide receiver on his college football team, he graduated from Haverford College in 1956 with a degree in political science. Following a master's degree at Michigan State University, John married Barbara Pinney (Bryn Mawr College, '58), and moved to Ceylon (now Sri Lanka), where he worked for the non-governmental organization CARE to establish a national school food program. Thus began a career that spanned decades and continents, in which John worked to foster social stability and economic growth in Asia and Africa. Guided by values wrought in his childhood home and refined at his Quaker college, John did his best to make the world a better place. And it can be said that he had a lot of fun along the way.

After his time in Ceylon, John continued his work with CARE in the Philippines and East Pakistan (now Bangladesh) before returning to Cambridge, where he completed a doctorate degree at Harvard University and began a 45-year career at that institution, teaching over a dozen different courses, helping to create and lead several graduate programs at the John F. Kennedy School of Government, and co-authoring a book that won the Charles R. Levine Prize for public policy and administration. A proponent of the case method of teaching, in which a real-world problem is analyzed by students from the perspectives of interested parties, John helped future leaders learn to build consensus and solve seemingly intractable questions of governance. He influenced hundreds of international graduate students who went on to leadership positions in their respective countries. Along the way John helped found OXFAM America, a global non-governmental organization that fights poverty and hunger. Working with the Harvard Institute for International Development (HIID), he served as a consultant to numerous foreign governments, including Kenya, the Philippines, India, Swaziland, and Bangladesh.

Perhaps John's most treasured foreign assignment was three years in Kenya, from 1976 to 1979, where Barbara worked on her doctoral dissertation, John worked in the Ministry of Agriculture's Arid Lands project, and his family of five took safaris in a wheezing VW minibus to desolate and crocodile-infested Lake Turkana, the plains of Tsavo, and the snow-capped peaks of Mount Kenya.

Following a divorce, John married Jane Johnston, a social worker, in 1989. In his later years, John's professional focus turned to Singapore, where he and Jane lived from 1992 to 1995, and where John was instrumental in creating one of the region's preeminent schools of public policy at the National University of Singapore.

In 1995 John became a grandfather and in his later years made frequent visits to see family in places as diverse as Rome, Italy and Shiprock, New Mexico. At his second home in Bridgton, Maine, he enjoyed hiking, cross-country skiing, working in a drafty barn, and sitting on his porch with Jane, watching deer.

Charismatic in the classroom, ruthless on the squash court, and at peace in the Maine woods, John leaves behind a legacy of public service, a spirit of moral and civic engagement, and a lust for adventure carried on by children who are teachers, journalists, writers, and travelers. He is survived by his wife Jane Thomas, his former wife Barbara Slayter, his three children Gwen, Patricia, and Stephen, and his eight grandchildren.

A memorial service for John is planned for July. Condolences and reflections may be sent to: