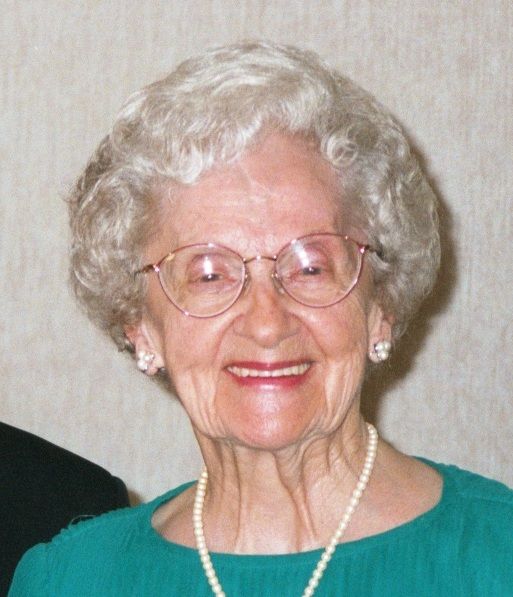 Lillian A. (Shaver) Roustio age 93 of Concord, formerly of Cedar Rapids, Iowa, passed away on Friday, November 13 at Carleton Willard Village in Bedford. She was the devoted wife of 71 years to the late Dr. Edward R. Roustio.

Born in Des Moines, Iowa on May 31, 1916, Lillian was the daughter of the late William T. and Mary Belle (Swope) Shaver. She was raised and educated in Des Moines and later attended and graduated from Drake University, Des Moines; Moody Bible Institute, Chicago; and Missionary Training School, Southern Baptist Seminary, Louisville, Kentucky.

Lillian and Ed married in Collinsville, IL in 1936 and together embarked on a career as minister and wife in several Baptist churches in Illinois, Kentucky, North Carolina, and Missouri, eventually settling in Keokuk and later Cedar Rapids, Iowa. She enjoyed numerous church and community activities including volunteering for many years in the Veterans Administration Hospital in Iowa City, Iowa. A heart for children, the less fortunate, and the hurting marked her life and ministry, as did her love of the Bible, which she would read through five or six times a year, and from which she could recite even into her later days. Known and appreciated as a woman who prayed for people and their circumstances, Lillian and Ed mentored and encouraged many who are in pastoral ministry.

A very creative person, Lillian possessed absolute pitch, sang solos, participated in small groups and choirs, played the piano and organ, and composed and copyrighted songs. She acted in many school, college and community productions and won numerous blue ribbons for her flower arrangements. Lillian instilled and nurtured in her children and grandchildren her avid love of reading, learning, and teaching. She was patriotic, politically active, and full of gratitude. She possessed a self-deprecating sense of humor and an exuberant and infectious laugh. As an active member of Toastmistress Club, she won many speaking events.

Dr. and Mrs. Roustio relocated to Concord in 2006 to be close to their family.

She is survived by her loving children Joy Green of Concord, Carol Martin and David R. Roustio, both of Hudson, NH; her grandchildren, Jeffrey Green, Jonathan Green, Amanda Martin Aseltine, Angela Martin Smith; Michelle, Maliea, Deydina Elizabeth, and Luis Martin; and Luis Roustio; her brother- and sister-in-law Lewis and Ann Eckert of Glen Carbon, IL and nieces and nephews. She was also the mother of the late Edward P. Roustio and sister of the late William T. Shaver and the late Howard Shaver.

GIFT'S IN LILLIAN'S NAME MAY BE MADE TO:
Child Evangelism Fellowship Fund
P.O. Box 348
Warrentown, MO 63383