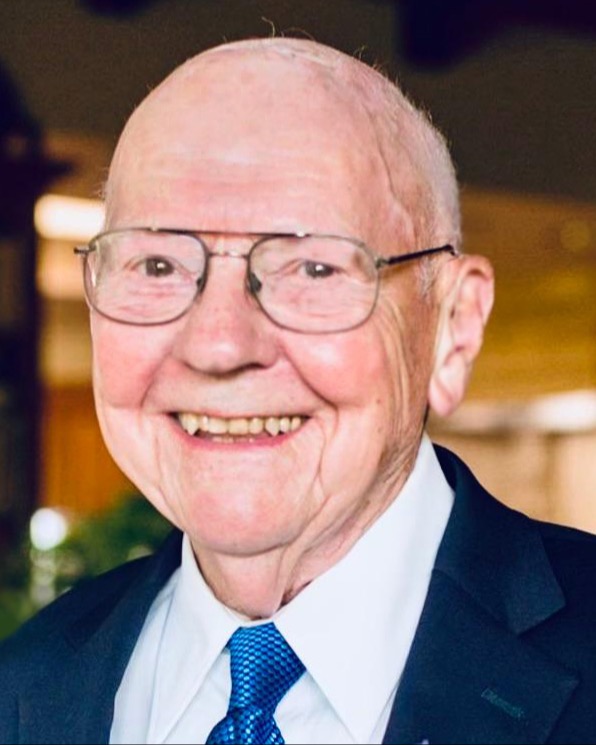 A proud veteran of United States Navy, he served from 1945 -1948 as an Aviation Machinist Mate, aboard aircraft carrier USS Valley Forge, traveling the world.

Upon receiving a B.S. in Chemical Engineering from Carnegie Mellon University, Lloyd accepted a position in applied research at U.S. Steel Corp., eventually taking responsibility for a wide range of administrative functions.  In 1971, after 19 years at U.S. Steel, he accepted a position as Director of Facility Services at Kennecott Copper Corporation’s Ledgemont Laboratory in Lexington, MA. He ended his professional career in 1994 as Director of Facility Services at W. R. Grace and Company where he had worked since 1981.

A Depression-era childhood shaped Lloyd’s work ethic and sparked passions including music, trains, and a desire for lifelong learning. After spending early years at a farm in Coons Corners, PA, his family lived in Pittsburgh where he joined the Trinity Episcopal Cathedral Men and Boys’ Choir, singing five days a week at age nine, continuing for years, off and on until age 27. Lloyd’s devotion to the Episcopal Church continued as an adult, serving as a Junior and Senior Warden at St. Martin’s Episcopal Church in Monroeville, PA, instrumental in the development of the congregation. From spending every weekend hands-on in the construction of the new building, to singing in the choir, his dedication to the church continued when the family moved to Concord. At Trinity Episcopal Church, Lloyd’s involvement included being a Lay Eucharistic Minister, Sunday School teacher and Senior Warden.

A model train enthusiast, Lloyd built elaborate layouts in his basement and backyard. The garden railroad became a center of entertainment for family and friends, ultimately inspiring fascinating train travel for June and Lloyd in both the US and abroad. The son of a musician, Lloyd’s musical talents extended beyond voice and piano when in his retirement, he became a percussionist in the Concord Band, performing with the group as recently as last summer.

Decades of intellectual and spiritual gatherings enriched Lloyd’s life with enduring friendships and inspired his unabated curiosity. An avid walker, his quest for optimal aging aligned with his ability to find humor and positivity in life.

Donations can be made in Buck’s memory to The Concord Band Association, PO Box 302, Concord, MA 01742

Family and friends will gather to honor and remember Buck for his memorial service on Thursday, January 12, 2023, at Trinity Episcopal Church, 81 Elm Street, Concord, MA at 11:00 am.

Concord’s town flag will fly at half-staff on Thursday, January 12, 2023, in honor of Buck's faithful service to his country in the United States Navy.