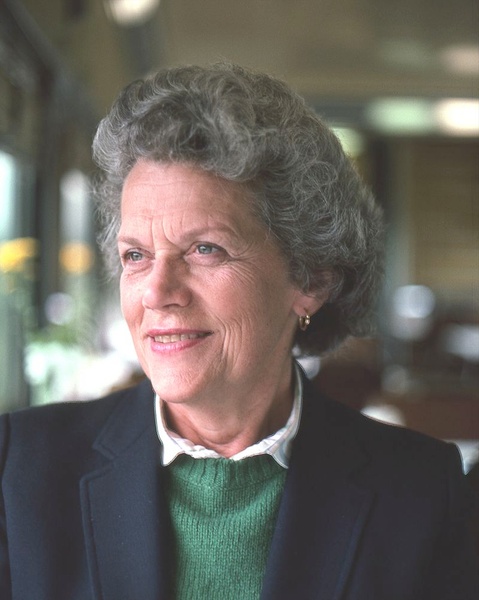 Mrs. Aldrich was born at Cedar Rapids, Iowa on December 13, 1922 the daughter of the late Walter R. Grissel and Ione (Mulnix) Grissel. She graduated from the University of Iowa with a BA in Liberal Arts in 1944 and MA in Anthropology in 1946. She was proud that, because there was no Anthropology graduate program at the time, she and her professors created one for her; thus, she became the first student at U. of I. to receive a Master's degree in Anthropology. She joined Delta Delta Delta (Tri Delt) sorority, was a member of Phi Beta Kappa and graduated summa cum laude. Her mother Ione was also a graduate of the University of Iowa, class of 1909. Many of her letters are archived in a special collection of their library.

In 1945, she met Harl P. Aldrich, Jr who was training in the Navy V-5 Flight Training program at the University of Iowa. After their marriage in Cedar Rapids on February 23, 1946, they moved into married student housing at MIT, where Harl completed his BS and Sc.D in Civil and Sanitary Engineering in 1947 and 1951 respectively, then joined the faculty. He left MIT in 1956 to co-found Haley and Aldrich Inc, a consulting firm of geotechnical engineers in Cambridge. They moved to Concord, Massachusetts in 1952, where they resided for the next 63 years.

Mrs. Aldrich loved to create beauty in many forms. As a member of the Conantum Garden Club, she surrounded her home with beautiful flowerbeds, and African violets were always lovingly tended indoors. With her lifelong passion for music, she became an accomplished musician, playing piano, clarinet, oboe, and English horn. The Concord Madrigals, now known as the Concord Women's Chorus, gave her an opportunity to use her rich alto voice and skills as an accompanist. Active in the Trinitarian Congregational Church, she sang in the choir, was often a soloist, and directed the childrens' choir. Up until 2015, Mrs. Aldrich was active in PEO, an international philanthropic organization promoting higher education for women through scholarships, loans and awards. She served as president of her local chapter from 1975-1977. She was also active in the local chapter of the American Field Service (AFS). International travel with her husband brought great joy to the anthropologist in her. A voracious reader of everything she could get her hands on, she loved expanding her knowledge about the world. Simple pleasures such as coffee on the terrace and drives through the countryside also brought her joy, as did the activities of her children in sports, music, drama, art and academics.

Mrs. Aldrich is preceded in death by her husband of 68 years, Harl P. Aldrich, Jr and a sister, Margaret Grissel Heinke. She leaves a brother James Mulnix Grissel of Fort Worth, Texas; five children, Katheryn Aldrich of Talent, OR, Harl P. Aldrich, III of Kalispell, MT, Barbara Robb of Calais, ME, Jean Barrett Sommerville of Alpharetta, GA, and Kent Aldrich of Portland OR; 8 grandchildren and 10 great-grandchildren.

Friends and family will gather for Lois' life celebration on Saturday, May 6, 2017 at 1:00 pm in the Trinitarian Congregational Church, 54 Walden St. Concord, with a reception to follow. Interment in Sleepy Hollow Cemetery will be private.

Gifts in her memory may be made to the:
Concord Women's Chorus, http://www.concordwomenschorus.org/cms/
or
University of Iowa Women's Archives
The University of Iowa Foundation
One West Park Road
Iowa City, IA 52244
http://www.lib.uiowa.edu/iwa/giving/