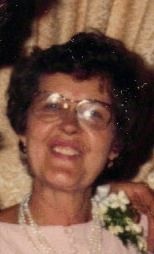 Lois M. Smith age 84 of Concord passed away peacefully on December 28, 2010 at Emerson Hospital. She was the beloved wife of the late Richard L. Smith and loving mother of the late Connie Culbertson and Christopher L. Smith

She was born in Virginia Feb. 6, 1926 daughter of the late Leonard M. and Hazel (Tribken) Latta.
Lois attended Oak Grove School in Maine where she had many friends including Jo Humphrey and Estelle Parsons. She worked as an airline stewardess and later as a salesperson at Johnny Appleseed Clothing store in Concord. She became a Concord institution for the Winnie the Pooh stuffed animals that she created for the Toy Shop.

GIFTS IN HER MEMORY MAY BE MADE TO:
National Breast Cancer Foundation
2600 Network Blvd.
Frisco, TX, 75034.