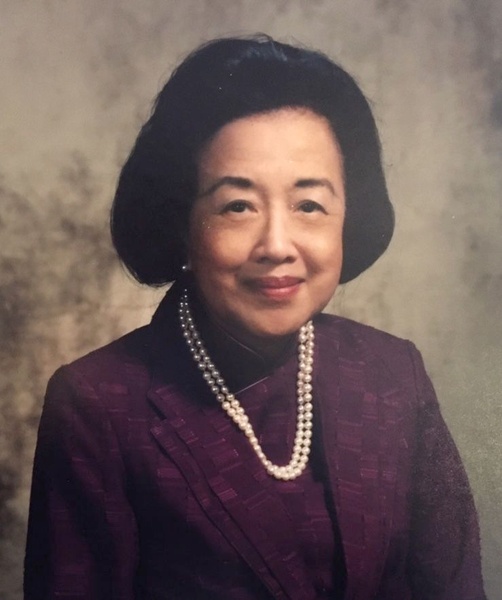 Lorraine, a 60 year resident of Lincoln died peacefully on March 1, 2016 surrounded by family. She was born in Shanghai, China to her parents, Margaret Kwei-Kiao and Frederick D. S. Chur on June 26, 1920. She was the beloved wife of the late Dr. An Wang. Mother of Frederick and his wife Laurel O'Connor of Boston, Courtney of Dallas, Texas and Juliette Wang Coombs of Fairhaven, MA. Devoted grandmother of Andrea and Allison Wang both of Belmont, MA and An Rhiel Wang of Dallas, TX. She was pre-deceased by her half-sister Gertrude Ho of Bethesda MD.

Lorraine was born and raised in Shanghai, China. Her parents were both born in Hawaii and had left there to return to China to marry and raise a family. She was educated at the prestigious McTyeire School and then St. John's University both in the British Concession in Shanghai. After graduating from college, she was asked to help teach English at her alma mater McTyeire, as most of the British teachers had returned to England during WWII. She immigrated to America in the mid-1940s and did post-graduate work at Wellesley College in English Literature. She continued to teach English Literature to undergraduate students at Wellesley College. During one of the weekly social gatherings held by college students from Shanghai, she met her future husband Dr. An Wang who was then working at the Computation Lab at Harvard University. They married on July 10, 1949.

While her husband was busy founding and then growing what was to become Wang Laboratories, Inc., at that time the largest US corporation founded by an immigrant Chinese entrepreneur, Lorraine busied herself raising three children, learning to drive and settling into the Boston suburb of Lincoln. She was known for her annual New Year's Eve parties she held for her friends until 1998, well into her late 70's. She loved playing mah jong which she learned at an early age in Shanghai from her mother and continued playing until her 80s. She was a prolific reader with a preference for mysteries and kept a journal of the thousands of books she read.

As Wang Laboratories grew, Lorraine would occasionally appear at company Christmas parties or the annual sales achievers convention charming everyone she met with her wit, her grace and a motivating comment for all. She would always give the most inspiring speeches at these conventions to the consternation of the unlucky next speaker.

As the family became more involved with philanthropic endeavors through the family's Wang Foundation, Lorraine made sure that some of the giving was steered toward the cultural arts leading to the Wang Center for the Performing Arts. She remained active with the Wang Foundation into her late 80s favoring local Boston not-for-profits focused on supporting and advancing the causes faced by more recent immigrants in Boston's Chinatown in the legal services, ESOL, elderly housing and low income elderly hospice care areas.

After her husband passed away in March of 1990, Lorraine occupied her time with the next generation and helped give advice to her three grandchildren and especially their parents. She looked forward to hosting her grandchildren at theater performances particularly at the Wang Center and supporting fundraising gala dinners once a year. She will be remembered for her graciousness and gentility, always making people feel good after having met her.

In lieu of flowers donations in Lorraine's memory may be made to:
Wellesley College
106 Central St.
Wellesley, MA 02481
or
The First Parish in Lincoln
14 Bedford Rd.
Lincoln, MA 01773.